Choosing the best CPU GPU combo for your gaming PC can be very simple - when it comes to most modern games, it's typically easy to avoid your CPU bottlenecking your GPU if you follow the conventional wisdom of balancing your CPU and GPU selection with a decent skew towards the GPU (in terms budget).

This is because most 3D titles are more graphically demanding than they are CPU demanding, but also largely because graphics in games continue to get better and better over time, with more complex and impressive rendering algorithms and effects coming into play every few years, while the actual game logic/code (the CPU's job) stays around the same or increases only a little.

Therefore, in general when building or upgrading a gaming PC, it makes sense to put more weight towards your GPU. However, there are always exceptions, and depending on your exact usage you may want to think through your choice of CPU and GPU a little more based on the following 3 things.

See Also: The Best CPUs for Gaming (Intel vs AMD)

Some games place more strain on the CPU than others, therefore a certain CPU GPU pairing may cause a CPU bottleneck in one particular game, and not in another. CPU intensive games, also sometimes referred to as CPU bound games, are games that have a lot of "behind the scenes" processing of non-rendering related game mechanics and gameplay, whether that's due to large game worlds, lots of in-game objects/characters/units needing processing (think strategy games), a lot of complex physics or AI, and so on.

If you're building a PC for a particular game (or genre), and after doing your research you find that game to be a CPU intensive game like GTA V as one random example, you may want to more evenly distribute your budget towards both the GPU and CPU (instead of the norm which is to spend a fair bit more on your GPU vs the CPU). How much more weight you put towards the CPU also depends on the resolution - and more importantly the refresh rate - of your monitor (both of which I'll explain next).

Other examples of CPU intensive games are No Man's Sky, Warzone (when playing online and using a 144Hz monitor), Boneworks VR (tons of physics), Civilization V (lots of background processing), Escape from Tarkov, WoW (especially raids, dungeons, major cities), Watch Dogs Legion, most Assassin's Creed games, and Cyberpunk 2077 just to name a few. Check out this full list of the most CPU intensive games if interested.

Just keep in mind that CPU intensive games can also be GPU intensive, so just because a certain game is CPU intensive does NOT mean that game doesn't also require a very good GPU to run well. If gaming at higher resolutions, you might still want to spend more heavily on your GPU vs the CPU, even if your game/s are very CPU intensive. It all depends.

Some CPU intensive games do have lower GPU requirements though, such as Minecraft, League of Legends, StarCraft 2, and Counter Strike Global Offensive. These are examples where you can confidently say the CPU is actually more important than the GPU overall (besides certain use cases such as running Minecraft with beefy graphical mods like shaders), and where you can get away with an average GPU if your CPU is good (and which may indeed be the optimal setup to go for, especially at 1080p where the GPU becomes even less important).

Choosing the best CPU GPU combo to avoid or minimize CPU bottlenecks isn't just about which games you play - the resolution you're gaming at is another big factor to consider. Or more specifically, how high your frame rate will be. Higher resolutions increase load on the GPU because there are more pixels needing to be rendered. Higher resolutions also typically reduce the load on the CPU - but NOT directly because of the higher resolution. Let me explain.

When the CPU processes and prepares a frame to be rendered by the GPU, the resolution typically does not change how long that takes for the CPU - whether you're at 1080p or 4K resolution, the CPU still has to process the same amount of calculations (physics, AI, collisions, character positioning, hits, etc).

However, because your frame rate will be lower at higher resolutions (sometimes significantly lower, as 1440p is 77% more pixels than 1080p and 4K is 4 times more pixels than 1080p) your CPU usage can actually decrease because it is processing and preparing less frames compared to lower resolutions where you get higher frame rates (and therefore the CPU has to process more frames). So, you could say that screen resolution indirectly affects CPU usage (though how much so depends on the game).

You can see the relation between resolution and CPU usage yourself by simply changing resolutions and monitoring your CPU usage go up or down (using a tool like MSI Afterburner).

Higher resolutions = more load on the GPU, and lower CPU usage due to lower frame rates.

Lower resolutions = less load on the GPU, and higher CPU usage due to higher frame rates.

Your monitor's refresh rate also matters when choosing the best CPU GPU combo for gaming. In fact, it's probably the most important factor of all in terms of picking the optimal CPU for the job. Higher refresh rates like 144Hz or 240Hz allow for much higher frames per second (FPS) compared to the historical standard of 60Hz (which only allows up to 60FPS).

But to reach a higher FPS of 144 or 240 - and to do so consistently so that you don't drop too far below during hectic action moments - you will need a better CPU. Especially for CPU intensive games, and especially at 1080p resolution (where your GPU usage goes down, and CPU usage goes up since your frame rates will be higher than 1440p or 4K).

The same is true for screens that have both a high refresh-rate AND high resolution - you'll also require a better CPU than you otherwise would. For example, 1440p 144Hz monitors are more demanding on the CPU than 1440p 60Hz, because while the GPU is more important at 1440p than 1080p, reaching 144FPS still requires a good CPU, even at higher resolutions. 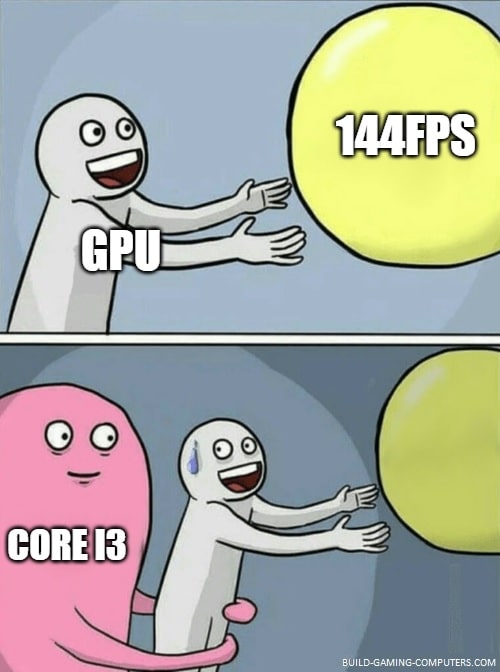 Though Intel's latest i3-12100 actually packs a serious punch


Best CPU GPU Combos in 2022 (Avoid Bottlenecks in Most Games)

Now let's talk more specifically about choosing the right CPU and GPU combination for the most common resolutions and refresh rates. Below I've listed some general recommendations for common sense pairings of CPUs and GPUs that will avoid CPU bottlenecks in most games AND that are good value combinations (in my opinion).

These are intended to give you an idea of what sort of CPU and GPU makes a good pairing, but keep in mind these CPU GPU combos are just general guidelines. Just please keep in mind the following: