Choosing the Best SSD for Gaming 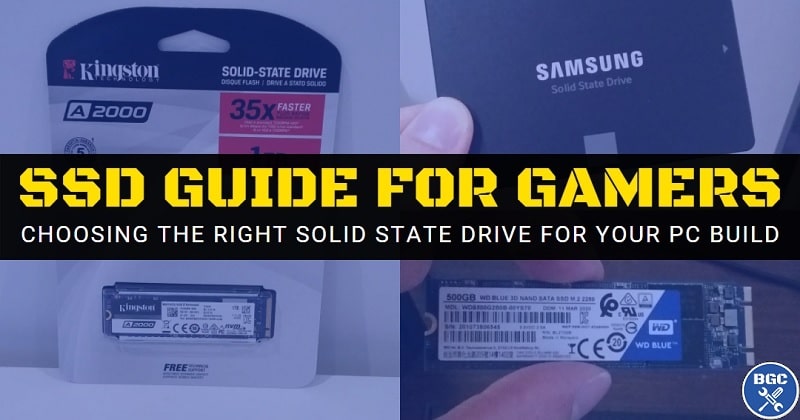 SSDs (Solid State Drives) are now the standard consumer storage devices and are included in the majority of new PCs. Starting out as expensive luxury accessories when they first hit consumer markets many years ago, SSDs have progressively become more and more affordable and have slowly replaced mechanical HDDs (Hard Disk Drives) in the past few years. In this guide you'll learn the technical reasons why SSDs are significantly better, how much storage you need for a modern gaming PC, and what features and specs to be aware of when choosing the right SSD for your particular setup.

See Also: How to Install an M.2 SSD

The Benefits of SSDs vs HDDs

Comparing SSDs (Solid State Drives) to HDDs (Hard Disk Drives) is like comparing broadband internet to dial-up. Flawless victory. But HDDs still have their place if seeking maximum bang for buck when it comes to storage capacity. The actual technology for SSDs has been around for a long time, such as in USB flash drives, but only recently in the past few years has it become available in large consumer hard drives.

The term "solid state" means that the data stored on the drive is done so through semiconductors, instead of being stored through magnetic media like HDDs. USB flash drives and SSDs work the same way, with the only difference being the form factor (size and shape). 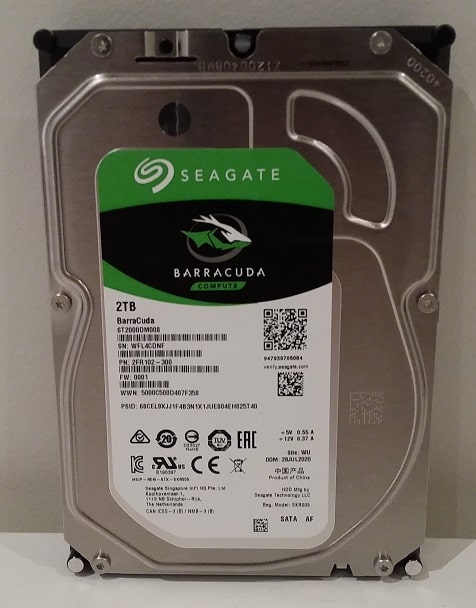 The main difference between SSDs and HDDs is that SSDs do not have any moving parts inside of them, whereas HDDs do (the heads, actuator and spindle motor if you want to get technical). The main benefits of having an SSD in your gaming or work PC are as follows:

Simply put, SSDs are much faster (sometimes dramatically so depending on the model), more reliable, more power efficient, take up less space, and more silent than HDDs. The only downside of course is they cost more than HDDs, but SSDs have become increasingly more affordable over the years to the point where every new PC build can realistically include one, no matter your budget.

At the very minimum, you want to get a small SSD (small in terms of storage capacity) to install your operating system on, as well as to house a few key programs or games that you use most often. Installing Windows on an SSD makes a massive difference compared to installing Windows on a HDD, and your system will boot-up a whole lot faster as well as perform much snappier overall in general.

But load times within the actual applications you use - and of course games - are positively affected as well (if said game/app has been installed on a SSD). This makes SSDs a no-brainer purchase - again, even if it's just a small 120GB to 240GB SSD if that's all you can afford, paired with a larger HDD if you need a lot of space. The ideal setup these days would be to go without HDDs altogether, and get a single larger SSD (or multiple SSDs). 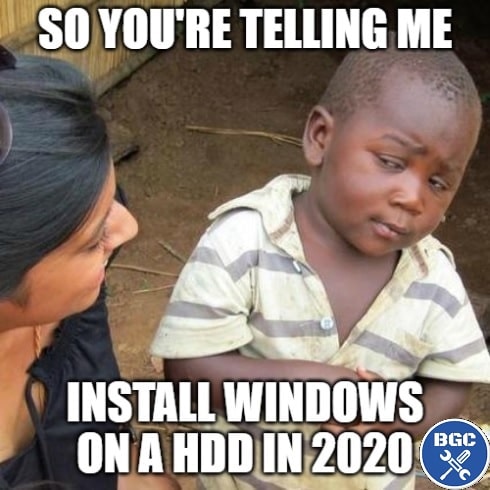 No fooling this kid

How Do SSDs Improve Gaming Performance?

The main benefit of installing a game on a SSD vs a HDD is to cut down on load times when either starting up the game or when loading a map. So, the longer load times a game has to begin with (games with huge preloaded maps for instance), the more that game will benefit from living on your SSD. Just don't make the mistake of confusing load times with actual gaming performance- using an SSD will NOT make a difference to your actual FPS (Frames Per Second).

Besides improved load times in-game, there is another potential benefit of SSDs for gaming. In certain games that constantly access assets on the fly during actual gameplay, such as in some open world games, an SSD can make the experience smoother and reduce what's called "hitching". Hitching is a phenomenon that happens when the game cannot access game assets fast enough during gameplay, which can cause a bit of stuttering. Large, modern open-world games can really struggle when installed on HDDs; just another reason why SSDs are the closest thing to a must-have component when building a good gaming PC. 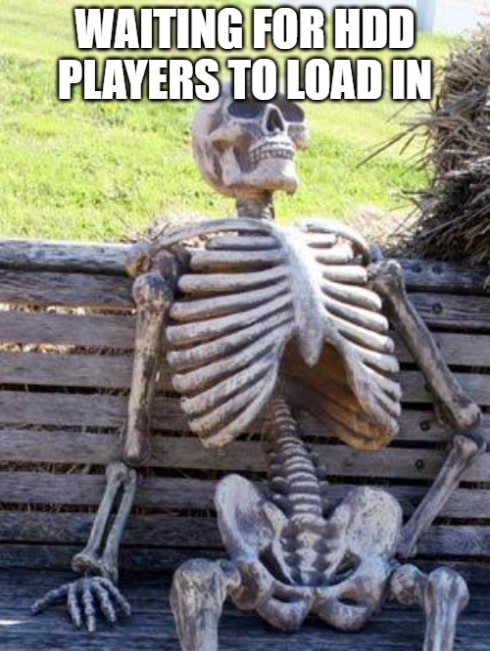 
What Size SSD is Enough for Gaming?

How much storage capacity you need obviously depends on how many games and programs you intend to store on your SSD, and how big those games/apps are in terms of file size. Modern PC games can take up a lot of space, with some modern AAA blockbusters requiring up to 150GB of free space (eg RDR2 and MSFS).

Most games aren't that big, but there are plenty that do require around 50GB to 100GB. If you download a bunch of games you can very easily fill up a 250GB or 500GB SSD in no time. For anyone who may be new to PC gaming, remember you can always uninstall games when you're not playing them to free up space, and then re-install them in future when you get the itch to jump back in (and you can retain your save files). 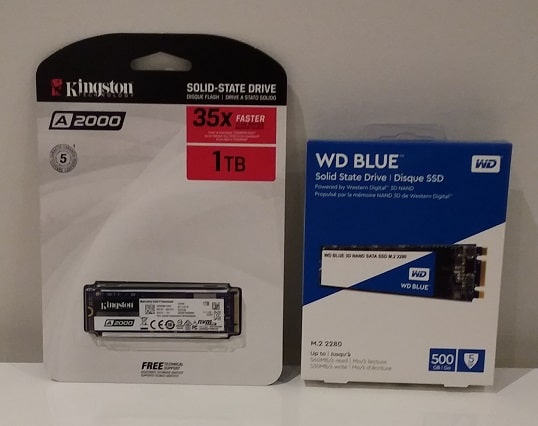 1TB or more is ideal for a gaming PC, but 500GB is fine on a budget. Anything less can fill up very quickly after installing a few big modern games

If you plan to install say, a dozen modern games, plus a bunch of other programs and taking into account Windows 10/11 (which takes up a chunk of space), you may very well want a 1TB drive. But 500GB can be fine for some people, and you can always buy a secondary drive later should you need more room, which is very quick and easy to do in terms of installation. But unless you know for sure that your storage needs are lower than average, I generally recommend most gamers look at getting a 1TB drive from the get-go if at all possible.

Another option to keep in mind that I touched on earlier is to get a smaller SSD, such as a 250GB or even a 120GB, and use that for installing Windows and a handful of key programs/games that you use most often. Then also get a 1TB or 2TB HDD for storing the majority of your stuff. This SSD and HDD combo setup is very common if you're on a budget and trying to be as cost-effective as possible, as not everyone can afford a 1TB SSD.

In terms of physical size, there are basically two different SSD size standards (technically called form factors). You have 2.5 inch SSDs which are installed within your PC case in a drive bay or rack (or attached to the rear of the motherboard tray if your case has that feature).

2.5" SSDs are connected to the motherboard using a SATA data cable, and also need to be connected to your PC's power supply with a SATA power cable as well.

Then there's the much smaller, thin M.2 SSD form factor, which conveniently installs into an M.2 slot on the motherboard itself. Most modern motherboards these days come with at least one or two M.2 slots, which are sometimes hidden underneath a M.2 heatsink which is there to protect and keep the drive cool. 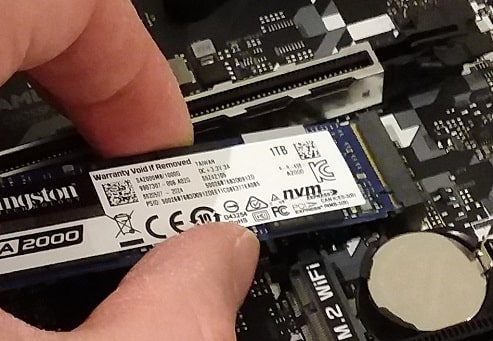 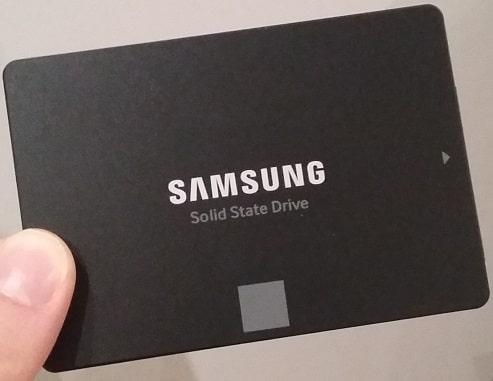 The convenience of M.2 drives is handy, but what makes the M.2 form factor superior overall is that it allows for a PCIe connection to the motherboard using the blazing fast NVMe interface, as opposed to the slower SATA connection that 2.5" SSDs must use. Don't get me wrong - 2.5" SATA SSDs are still very fast, especially relative to HDDs, but NVMe drives are even faster still.

Also, keep in mind some cheaper M.2 SSDs still use a SATA connection, meaning they are a little slower than PCIe NVMe models. If on a budget, a M.2 SATA drive is absolutely fine, but if you want the fastest SSD you can get, look at getting a M.2 SSD that has "NVMe" in the product listing/model name.

When it comes to NVMe SSDs (the fastest type of SSDs) you also have the choice between PCIe 3.0 (also called Gen3) which has been the standard for a while now, or the very latest PCIe 4.0 standard (Gen4). Goes without saying that Gen4 is faster, offering slightly higher read and write speeds.

It should also go without saying that Gen4 drives cost more, but sometimes significantly more depending on the model/s you're comparing. The speed differences between Gen3 and Gen4 are nice, but more a luxury, and generally speaking aren't going to provide a discernable difference to most people, especially when it comes to game load times. 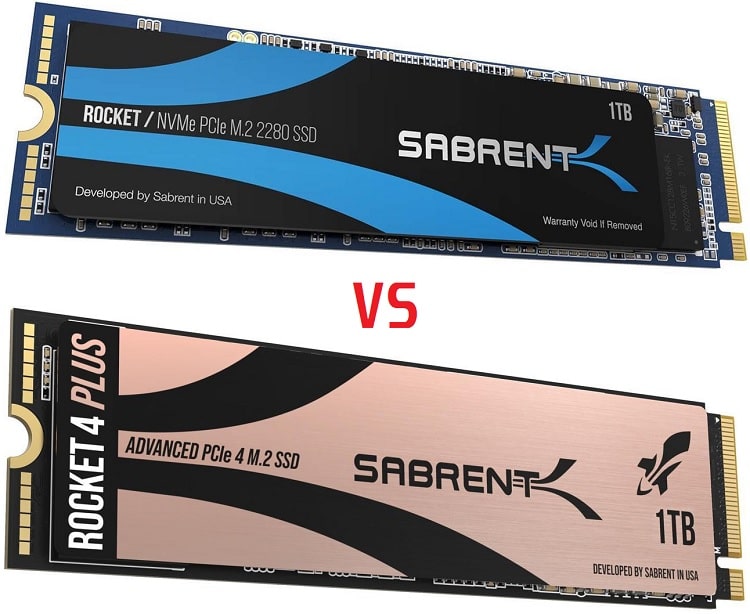 The Gen4 Sabrent Rocket currently costs roughly $50 US more, which is not worth it for purely gaming

For certain professional production use cases dealing with frequent transfers of large amounts of data, investing the extra money in a Gen4 drive can definitely make sense. But for most general PC users and gamers, Gen3 is plenty fast, and at the time of writing the best value for most people and what I suggest personally (assuming you are getting a M.2 drive, that is).

Just remember if you do end up getting a Gen4 SSD, make sure the motherboard you choose supports PCIe Gen4, and also that the particular M.2 slot you intend to install it on explicitly states support for Gen4. A motherboard can support Gen4 in general, but a certain M.2 slot on the board may not necessarily support Gen4. In other words, if a board has two M.2 slots, one of them may only support PCIe 3.0. Oh, and at the time of writing, X570, B550, Z590, and Z690 motherboards all support Gen4, so chances are at this stage that any half-decent modern motherboard you're considering will support it.