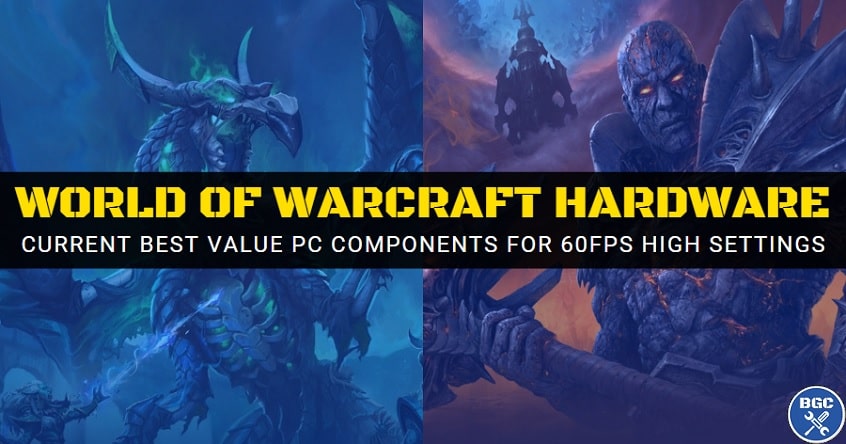 World of Warcraft (WoW for short) was the catalyst that cemented the MMO / MMORPG genre (Massively Multiplayer Online Role Playing Game) into the gaming mainstream. Many years on, WoW is still a thriving ecosystem of engaged players worldwide, and who knows, perhaps the end is still nowhere in sight. If you're upgrading or building your gaming PC for World of Warcraft or the latest Shadowlands expansion, in this hardware buyer's guide we'll break down the minimum requirements but more importantly the specs needed to hit that flawless 60FPS performance level to enjoy the game to the fullest without slowdowns or stuttering getting in the way.

World of Warcraft / Shadowlands Requirements (As of 2022)

As they stand right now in 2022 as I write this (the developer can always change the requirements of a game over time as the title is updated) I'd say the requirements for WoW are somewhere in the middle relative to other popular PC games. The game isn't overly demanding, and will run decently on cheaper or older systems, but at the same time the official 'recommended' specs could be considered somewhat beefy. 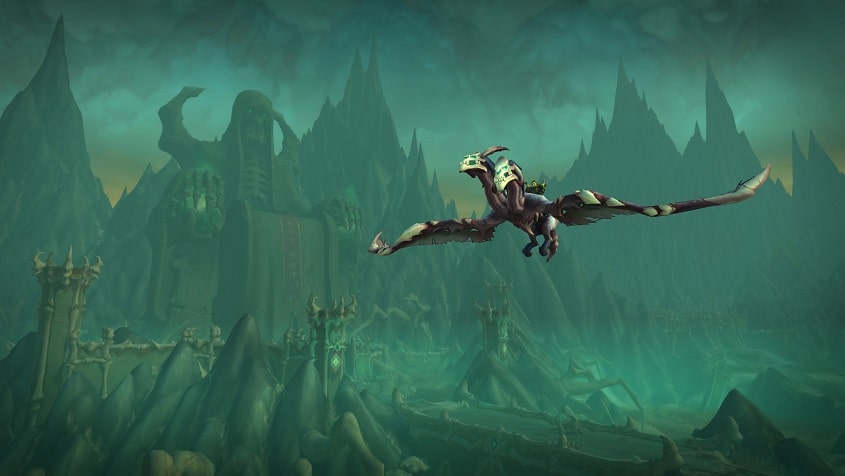 The graphics in WoW aren't on the level of the latest AAA releases, though that's not the focus of the game (nor expected given its age)


How Demanding is WoW on Hardware?

A GTX 1080 (or more modern equivalent like the RTX 2060 Super or RTX 3060) is still a decent gaming GPU all things considered, so if you want the best WoW experience you will need to invest in a decent mid-range graphics card from the modern range. Especially if you want to run the game smoothly on high settings across all areas of the game, and even more so if you're also gaming on a high resolution display (1440p or 4K).

But with World of Warcraft, it's not all about graphics - the game can be quite heavy on the CPU at times (especially in dungeons, major cities, in raids, and PvP). It even made my list of the most CPU intensive games of all time (though there are much more CPU-heavy titles than WoW). That said, there's no need for a high-end CPU if you're choosing among the modern CPU stack, as any good mid-range CPU from Intel or AMD within the past couple of years is going to be more than enough to get the most out of WoW, even during CPU intensive moments.

Anyway, let's leave somewhat unhelpful generalizations aside and get into specific requirements for that nice and smooth 60FPS based on your screen resolution, which is a great frame rate for WoW (no need for 144FPS on 144Hz monitors in a slower-paced title like this). Just keep in mind the hardware recommendations below are for Ultra settings (settings set to "10" within WoW's unique graphics slider in the menu), so you can save money by lowering the settings and getting cheaper parts than the ones suggested below. Let's get into it. 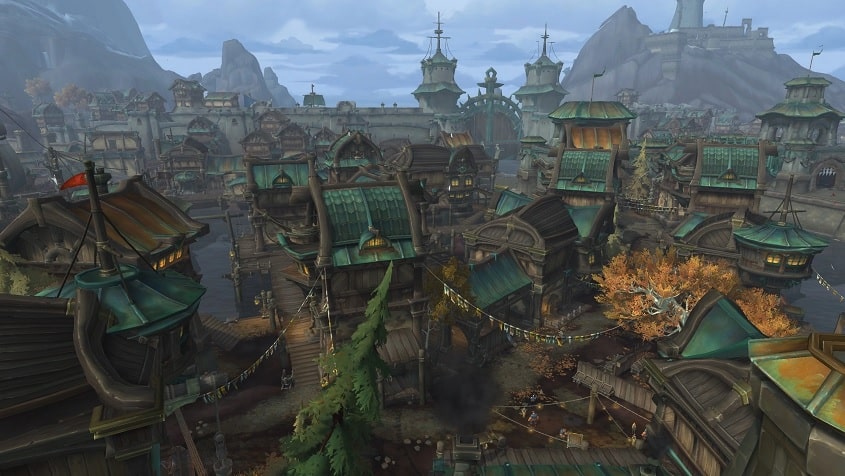 Boralus is one of the most demanding areas in WoW, and FPS can be substantially lower than in other areas (Image: Wowpedia)

With the official recommended specs for WoW that includes a GTX 1080 (which is roughly the same as RTX 2060 Super or RTX 3060, give or take a few frames here or there), you'll actually be able to reach 60FPS on Ultra settings at 1080p in many areas of WoW or Shadowlands. You could even use these GPUs for 1440p if you compromise on graphics settings, too. But the aforementioned cards would dip under 60FPS every now and again. Not the end of the world or your enjoyment in a slower paced game like Wow where there's no huge need to stay at that flawless 60FPS at every second (40-50FPS is still absolutely fine for this type of game, unless you're super picky).

But if you do want to stay above 60FPS on maxed settings throughout the whole (or the far majority) of the game for the very best WoW experience, you'll want a GPU in the tier above. That means looking at a RTX 3060 Ti or RX 6600 XT if choosing from the latest generation, or a RTX 2070, 2070 Super, or RX 5700 XT if buying a used GPU from the generation before that. Personally, I don't think these are necessary though, and a vanilla RTX 3060 or RX 6600 is more than enough for WoW at 1080p Ultra.

But don't forget the CPU, because as mentioned WoW is a fairly CPU intensive game, at least relative to its demands on the GPU (you could say they're about even, compared to most other games which are usually more GPU bound). So unlike other titles where you'd perhaps want to skew your budget quite a bit towards your GPU purchase relative to your CPU selection, to build the best PC for World of Warcraft I'd personally opt for a more even, balanced CPU GPU combination.

Just remember that a modern Intel Core i3 or Ryzen 3 can still be totally fine, as these latest entry-level gaming CPUs are faster than say an old Core i7 (generation matters more than the model series - just 'cause you see i3 or Ryzen 3 in the name doesn't mean it's not good for gaming). That said, in a CPU intensive game like WoW you ideally want a slightly stronger CPU such as a modern i5 or Ryzen 5, which will keep that frame rate up higher and reduce those dips during CPU intensive moments (ie raids).

Oh and lastly for anyone picking and choosing between different CPU models, CPU performance in WoW is all about that clock speed, and higher core counts won't help much (if at all) in improving performance as the game isn't optimized for high core counts (at least at the time of me writing this). A fast quad or six core is better than a slightly slower 8 core CPU, though to be fair that applies to most games. So, putting all this information together, here's the type of PC build I can suggest to get the best 1080p experience for WoW or Shadowlands based on the current hardware market. 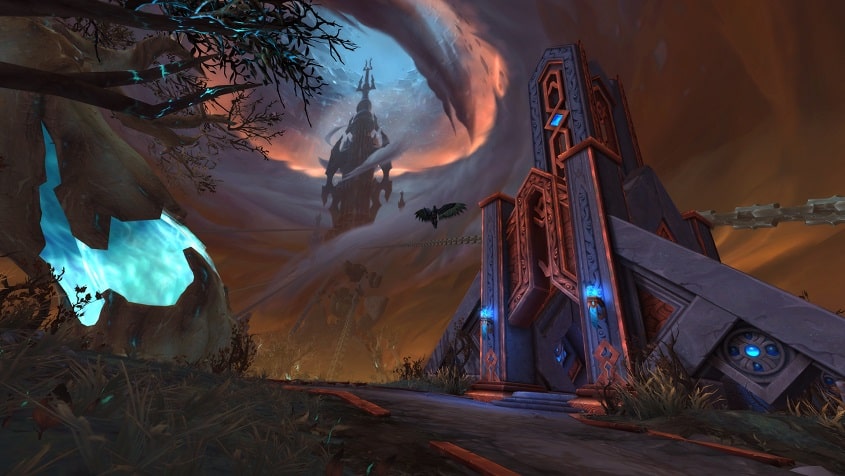 WoW in not an overly demanding game graphically speaking. At higher resolutions your GPU requirements obviously increase compared to 1080p, but not all that much. To max-out the game at 60FPS at 1440p, or even 4K, you don't need a top of the range setup, and a modern upper mid-range system will go a long way. That means there's just no need for very expensive cards like a RTX 3080 or RX 6800 XT, even at 4K, and definitely no point getting even more powerful cards like the RTX 3090 or RX 6900 XT for that one crazy person who was eyeing off one of these monsters for WoW. All of these models are overkill for WoW. But you'd hope and expect that to be the case, considering how old WoW now is, as well as the fact it's not a game about the graphics.

Anyway, based on looking over various performance benchmarks, here are my curated suggestions for 1440p and 4K if you want to hit 60FPS consistently at 1440p or 4K on maxed settings (graphics settings set to '10' in the WoW menu). If you want the best value setup though, I would get a slightly lower-tier GPU and lower the graphics settings. So for example, below I suggest a RTX 3070 if you want the absolute best performance in all areas at 4K Ultra, but a RTX 3060 Ti (a tier below the 3070) would be absolutely fine at lower settings. Same goes for 1440p - a RTX 3060 Ti is the ideal, but a RTX 3060 would still be totally fine.

CPU recommendations remain the same as 1080p, because as explained in What Are CPU Bottlenecks, higher resolutions do not tax the CPU any more than at 1080p (and they sometimes even lower the load on the CPU). So if a certain CPU can hit 60FPS at 1080p (with a good enough GPU as well of course), then that same CPU is good enough for 60FPS at any other resolution. RAM suggestions are also the same across the board for all resolutions too - the standard recommendation of 16GB of DDR4 is more than enough for maximum WoW performance (and 3200MHz speed is the sweet spot for value these days).

That wraps up the key points to know about building a PC for World of Warcraft or Shadowlands, and hope it helps you put together the optimal setup for your needs. If you want to see the above CPUs and GPUs in full PC build examples, check out the latest gaming PC builds for much more information on choosing components, or the guide to prebuilt gaming PCs if you prefer to buy a system already assembled. As always, good luck and GG, friend.