Maintaining safe temperatures in your gaming PC or laptop is important for optimal performance of your hardware components, as well as for their longevity. If components like your CPU or graphics card (GPU) operate at high temperatures, this can cause issues such as stuttering performance when gaming, game crashes, and even system crashes.

If left unchecked, overheating can also lead to damage of your PC hardware components. To avoid these problems, it's a good idea to keep an eye on the temperatures of key components, particularly the CPU and GPU, as they are the primary sources of heat in a computer (whether that's a desktop or laptop). In this guide we'll discuss safe GPU temperatures, and explain how to check and monitor temperatures in real-time when gaming or when running other demanding applications.

What’s considered a normal or safe GPU temperature in a desktop or laptop computer depends on various factors, such as the specific model of hardware, the general ambient temperature of your room, and what season of the year you're in as it's normal for your system to run a little hotter in summer than in winter. It's also normal for laptops to run hotter than desktops, since mobile devices aren't able to be as effectively cooled as desktop machines due to their space constraints.

As a general rule of thumb, a safe temperature range for a typical desktop GPU (graphics card) when under load during a gaming session is between 60 and 85 degrees Celsius (140 - 185 degrees Fahrenheit).

Some cards can safely operate at higher temperatures, as explained below under the NVidia and AMD sections where we give some estimates for various GPU series. But to know the exact temperature limit of your specific graphics card model you want to consult the manufacturer.

What Happens if Your GPU Overheats?

If temperatures of your graphics card reaches a high level, temporarily it's usually not going to be a problem because  modern GPUs will automatically throttle itself in real-time (reduce its frequency and therefore its performance) once it reaches a certain temperature in order to protect itself from damage. However, a GPU that is throttling itself isn't ideal, and means there is a problem, so if that happens you should look at ways to lower your GPU temperature.

Note: Max temps can vary for specific models within a certain GPU series.

Note: Max temps can vary for specific models within a certain GPU series.

How to Check GPU Temperatures (Windows 11/10)

There are various ways to check GPU temperatures in Windows 10 or Windows 11. The simplest, easiest way to do so without even having to download any software applications is to open up the Windows Task Manager. Either search for it in the Windows search bar on the bottom-left of the main desktop screen, or simply press Ctrl + Shift + Esc. Then click on the 'Performance' tab, and click on 'GPU'.

If you have both integrated graphics and a dedicated/discrete GPU - as my gaming laptop does in the screenshot below - you will see two 'GPU' tabs, so make sure to click on the one that lists your discrete GPU (the NVidia or AMD one, not the 'Intel UHD' one).

The GPU temperature will be shown in the stats at the bottom: 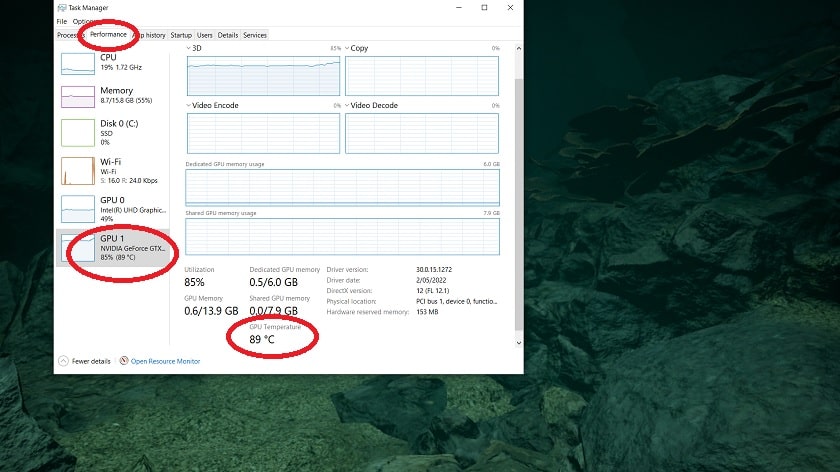 Also, enable the setting 'Always on top' from the main options menu so that Task Manager will be visible during a fullscreen gaming session: 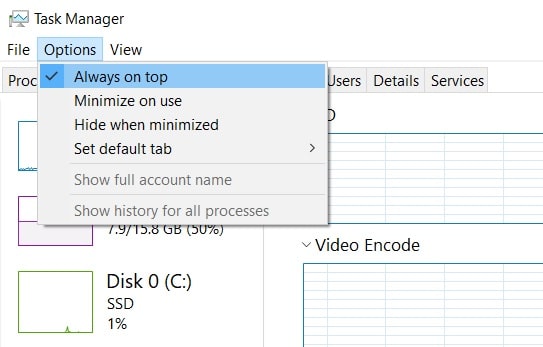 Task Manager is fine for a quick glimpse at GPU temperatures, but a third-party monitoring tool like MSI Afterburner is much more useful and can show all sorts of useful data when gaming (including showing real-time FPS data). It's also free and easy to use, and it works with any NVidia or AMD card (doesn't have to be an MSI branded model).

Download Afterburner and when you open it up you will see the current GPU temperature on the right hand side:

At the bottom of this screen you should also see a GPU temperature graph, which is very useful to see how your GPU temp changes when under load. If you don't see this graph then enable it somewhere within the settings (for me I clicked on the options icon in the middle, clicked on the 'Monitoring' tab, and under the GPU temperature graph options make sure 'Show in On-Screen Display' is enabled.

You can do a lot with Afterburner, including overclocking your graphics card too should you want to get a nice performance boost. Besides MSI Afterburner, there are other ways to check GPU temperatures in Windows. Two other common methods to show GPU temps is to use the AMD Radeon Software if you have an AMD graphics card, and NVidia's GeForce Experience software for NVidia card owners. Both of these software programs have overlays that you can enable in their settings to display your graphics card temperature in real-time whilst gaming.

Now that you know all about safe GPU temperatures, as well as how to show GPU temperatures, you're all set to go ahead and easily monitor if your graphics card is operating at normal or safe temperatures. It your card gets quite loud or hot and you want to check whether temps are an issue or not, you now know what to do. But if you want to be proactive, even if your card isn't having issues you want to consider testing your GPU beforehand to see how it operates when under load. Run a demanding game and monitor those temps using MSI Afterburner's GPU temperature graph - you can just run the game for a while and then look at the graph afterwards.