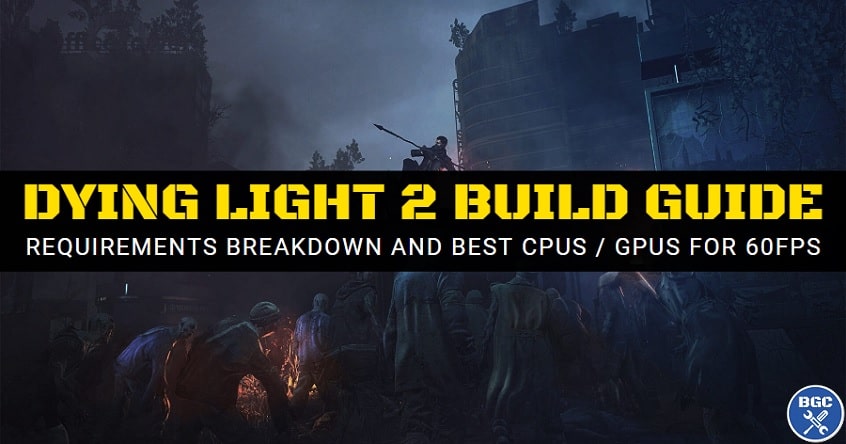 The original Dying Light has a cult-like following for being one of the best zombie games of all time, and the sequel is finally here. In this PC build guide we'll look at the system requirements for Dying Light 2, and based on analyzing performance benchmarks from around the web I'll list my CPU and GPU recommendations to get the most out of the game for your particular display resolution (whether 1080p, 1440p, or 4K). Dying Light 2 can be a very demanding PC game, especially if you enable its vast and impressive ray tracing effects which hits your performance hard. Without ray tracing, and if you use moderate graphics settings, the game isn't overly demanding though - reaching 60FPS on low/medium settings at 1080p for instance doesn't require a very powerful PC. 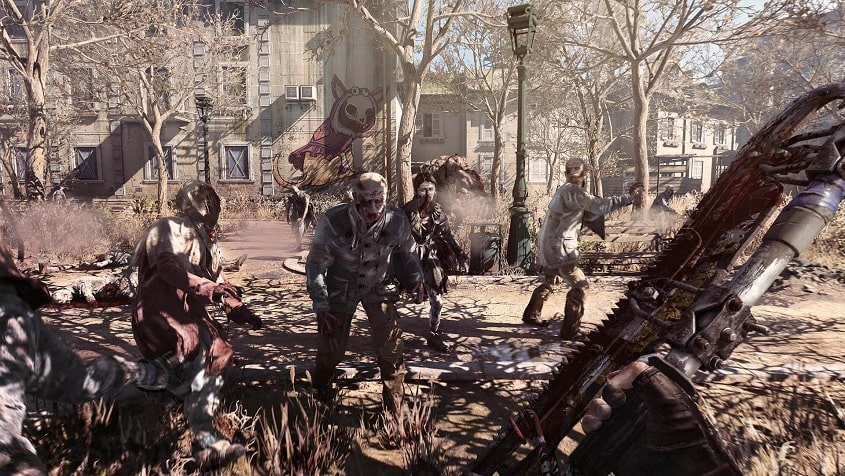 Like with the requirements for Cyberpunk 2077, where developer CD Projekt Red handily provided a variety of spec requirements for various resolutions and for ray tracing, the developer of Dying Light 2 (Techland) have done something similar. A picture is worth a thousand words, so no need to say much about them apart from the fact that they are fairly beefy if you want ray tracing at 60FPS - they've listed a RTX 3080 as recommended for 1080p with maximum ray tracing settings, which illustrates just how demanding the game can be if you want to run it in its full graphical glory. 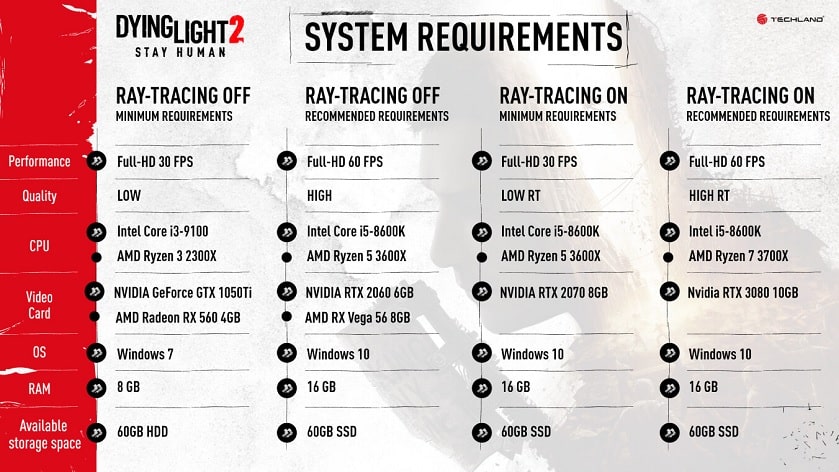 If you want 60FPS at various settings (with or without ray tracing), I've analyzed a bunch of the Dying Light 2 benchmarks out there and will give my suggestions below for the main PC gaming resolutions - 1080p, 1440p, and 4K. I don't know about you, but ain't nobody got time for a console-like 30FPS when gaming on the superior platform that is of course the PC, so my hardware recommendations will all focus around hitting that 50-60FPS mark. I've also tailored the suggestions for various settings for each resolution.

Before getting into the specs, let's first understand the main graphical options we have to work with. Besides tinkering with individual graphics settings, Dying Light 2 has 5 main graphical presets:

Based on comparison screenshots and videos, the lowest preset still looks fine and won't ruin the game whatsoever, hence why I've included 1080p Low in the recommendations below. There is no typical "Ultra" setting in Dying Light 2, so maxing-out the graphics would be either using the High preset, or moving onto the two ray tracing settings 'Raytracing' or 'High Quality Raytracing'.

Having ray tracing enabled does noticeably improve the quality of the visuals in this particular game. Ray tracing effects in certain titles can be a little underwhelming and sometimes difficult to even discern unless you really stop and look at the scene, but not in Dying Light 2. Like in Control or Metro Exodus as two good examples, Dying Light 2 has a thorough ray tracing implementation for not just lighting (global illumination) but for shadows, reflections, sun shadows, ambient occlusion, etc. 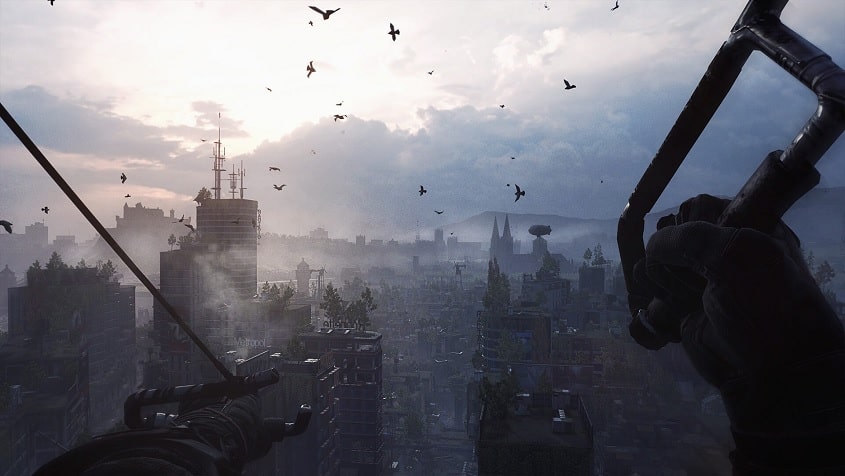 But that means enabling ray tracing hits performance hard, and if you look at Dying Light 2 benchmarks you'll see significantly lower frame rates with ray tracing on vs off (even at the standard resolution of 1080p). DLSS and FSR, both of which were included on day one of release, definitely help things though and can significantly boost FPS. In fact, they are basically necessary if you want playable performance with ray tracing, especially at 1440p or 4K. Just remember that DLSS is only available on NVidia "RTX" cards, whereas AMD's FSR works on any graphics card, and you can find both options in the graphics settings.

Anyway, after analyzing and curating multiple benchmarks of Dying Light 2 from around the web (so you don't have to), here are my recommendations for a 60FPS experience on average throughout most of the game at various resolutions and settings. I've also included ray tracing recommendations for each resolution, assuming DLSS is turned on to the "Quality" setting which is a nice balance of performance boost vs retaining the highest image quality. You'll also note I've only included NVidia cards for ray tracing, as they are objectively the better option if you want the best ray tracing experience in this title - DLSS is slightly more effective than FSR, with the latter looking slightly blurrier.

That's all I gotta say about building a PC with a great Dying Light 2 experience in mind. If you want to know the best settings for Dying Light 2 to optimize performance, along with some nicely done comparison of different settings and how they look, check out the ever-reliable Digital Foundry and their Dying Light 2 settings guide. 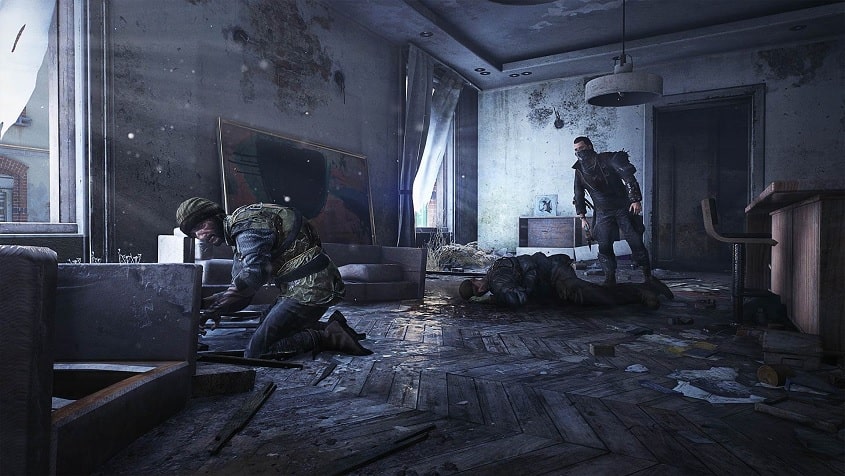 Dying Light 2 features a day/night cycle; humans rule the city during daylight, but at night it's zombie central and more dangerous