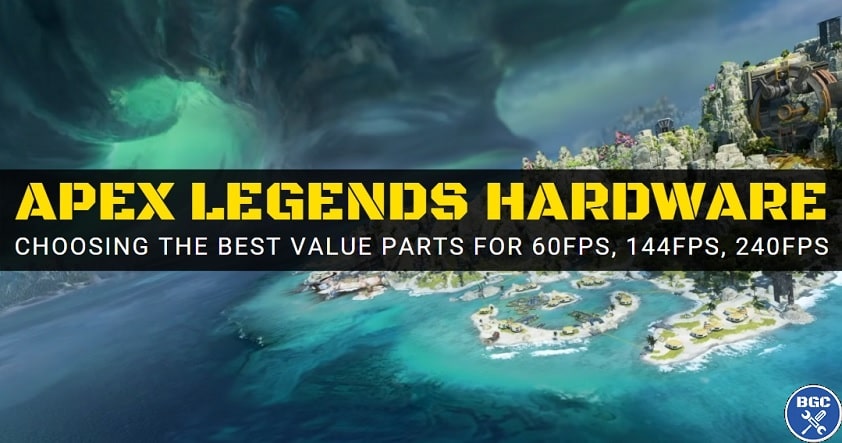 Apex Legends is a free to play hero shooter/Battle Royale developed by Respawn Entertainment, and is currently one of the most popular games in the world often found near the top of the Twitch charts. If you're planning the best PC build for Apex Legends to get the most bang for your buck, and to get flawless 60FPS, 144FPS, or even 240FPS performance depending on your gaming monitor, in this guide I've done the extensive benchmark research to bring to you the PC parts you'll need to get the job done for less.

Compared to many new AAA games, Apex Legends is not a very demanding title, though it definitely does require stronger hardware than other popular competitive titles such as CSGO, Fortnite, and Valorant, since Apex has arguably the more impressive graphics. Getting 60FPS is not hard, but reaching consistently high frame rates in Apex Legends for 144Hz or 240Hz monitors does require a fairly beefy setup. 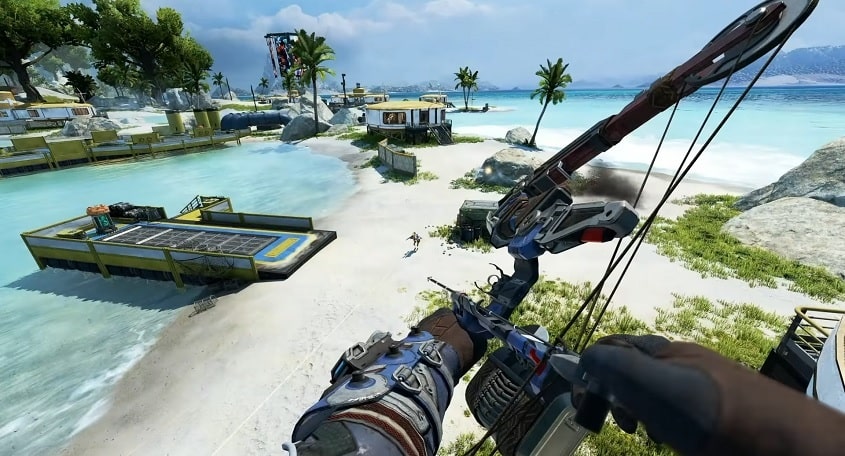 Apex Legends is not the most graphically demanding game, but definitely more so than some other eSports

Before getting into PC build recommendations, let's first quickly discuss choosing the best GPU for Apex Legends in a general sense. Specifically, whether you should buy an AMD or NVidia graphics card if you mostly care about maximizing performance in Apex. Depending on the game, one GPU company can sometimes offer slightly higher frame rates than the other. Sometimes AMD has a slight edge, and other times it's NVidia. When it comes to Apex Legends, after analyzing various benchmarks from multiple sources, neither NVidia nor AMD have a clear lead when it comes to pure gaming performance.

However, despite that, there is one reason why you may want to consider a NVidia GPU - if you're a competitive player that is. By competitive I simply mean that you care about playing at your best and winning as many games as you can (and Apex Legends, or other eSports, is your primary game). If that's you, you should favor getting a NVidia card, as their cards have an exclusive feature called NVidia Reflex which helps to reduce input lag in fast-paced competitive shooters, and which Apex Legends has support for. The far majority of professionally sponsored Apex players use a NVidia graphics card (if not every single one of them).

But that doesn't mean you need NVidia for Apex Legends. For casual gamers, and those who play a range of different titles, either AMD or NVidia is absolutely fine, and AMD may sometimes be the better bang for buck depending on your price range, and depending on pricing in your particular region at any given moment in time. In my suggested PC builds below, I'll include both AMD and NVidia recommendations seeing as most people are not pro or aspiring pro players trying to squeeze out every little extra edge possible.

See Also: How to Choose the Best Gaming GPU

Investing in a 144Hz monitor is very much worth it for a fast-paced competitive shooter like Apex. But if you're on a 1080p 60Hz monitor and just want to get 60FPS in Apex Legends on low settings, the cheapest new setup based on modern parts that will achieve that is a Ryzen 7 5700G processor using its integrated graphics.

That means no need for a dedicated graphics card, which saves you a stack of money. Just make sure to get relatively fast RAM of at least 3000MHz to take full advantage of an integrated graphics like the 5700G, as they rely on RAM quite heavily and so saving a few bucks and getting slower RAM such as 2666MHz modules is not worth it. Buying 3200MHz is not much more money these days, and makes a clear difference in frame rate compared to 2666MHz.

If you're wondering about the cheaper Ryzen 5 5600G - AMD's other CPU with decent integrated graphics - that one will still serve you well for Apex at 1080p 60Hz, however you wouldn't get 60FPS consistently, even on low settings (not the end of the world but just pointing that out as these PC builds are intended for those wanting a flawless 60FPS experience).

Oh and instead of getting the 5700G and using its integrated graphics, another option to consider if it's perhaps cheaper in your region is to get a cheap GPU like the RX 560, which is the cheapest card that'll hit 60FPS (and pair it with the cheapest CPU you can find such as a recent Ryzen 3 or Core i3).

If you're a casual gamer who wants to play at high graphical settings (low settings is ideal in Apex to maximize frame rates and minimize input lag), integrated graphics is not going to cut it and you'll need to buy a GPU. An entry-level card like the GTX 1650 Super would easily get the job done (or an AMD equivalent like the RX 570, though that card is so old now that I don't recommend it anymore). Then pair it with the cheapest modern CPU you can get from Intel or AMD.

Related: Are Ultra Settings Worth It? 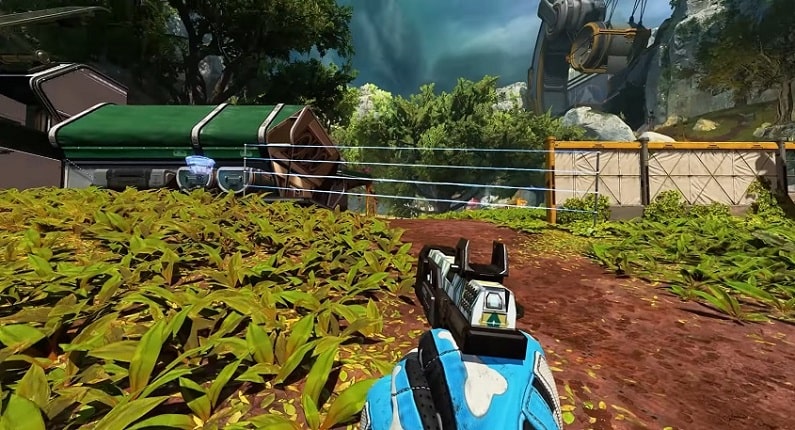 Moving onto fast 144Hz and 240Hz monitors, which are highly recommended for Apex Legends if you're aiming to get the most out of a fast-paced competitive shooter like this. In 2021, the 60Hz vs 144Hz debate is well and truly settled, with 144Hz monitors offering a slight yet clear advantage in high action titles.

Every single pro Apex player - and by pro I literally mean professional, as in getting paid to play - uses either a 144Hz or 240Hz monitor. Some even use a cutting-edge 360Hz display, but these are still quite niche due to their price, and so I won't be covering them in this guide for now (also because of the fact that the difference between 360Hz and 240Hz is a lot less important/noticeable compared to say 144Hz vs 240Hz for Apex).

We'll get to 240Hz in just a bit, but let's go over the parts you'll need to get 144FPS consistently for either 1080p 144Hz or 1440p 144Hz monitors. Just keep in mind that 1080p is better for competitive players and what every pro uses as well, since it allows you to get higher frame rates (which means less input latency). I've included 1440p 144Hz recommendations as well at 1080p because casual players are totally fine to use 1440p (and 1440p 144Hz monitors are very popular these days, and a great choice if you also play other types of games).

Keep in mind I've only made recommendations for low settings since that is what the far majority of players want to use - getting higher frame rates are far more important in Apex than getting higher quality visuals. Oh, and I've left out 4K recommendations for this guide as well, simply because the amount of players using 4K monitors for Apex Legends is extremely slim.

Now onto 1080p 240Hz monitors, which requires a bit more grunt from the GPU, but the CPU, unlike other games where a high-end CPU is needed to reach 240FPS (think Warzone), since Apex Legends isn't very CPU intensive overall you can get away with even a Ryzen 5 3600 for 240Hz (assuming your GPU is good enough - Apex Legends is more GPU bound than CPU bound).

Keep in mind my recommended specs are for those wanting the cheapest setup to hit 240FPS - obviously the "best" setup for 240Hz would be to simply get the single fastest CPU and GPU on the market. Oh and I've left out 1440p 240Hz monitors because they are so rarely used, as well as being super expensive. For Apex Legends, 1080p 240Hz is far better for those higher frames.

One last thing I want to mention for anyone planning a PC build for 240Hz with Apex Legends is that you may want to actually cap your frame rate to under 190FPS as explained in this good Apex settings guide. The game has a unique issue not found in other competitive titles (AFAIK) where at very high frame rates where you may encounter some odd performance hiccups (stuttering). At the time of me writing this, the issue still appears to be present for players, so I highly suggest reading that Reddit thread.

Anyway, that's all I have to say about building the best PC for Apex. Hope it helped somewhat and good luck. If you want to see full PC build examples then don't forget the main gaming PC builds guide which covers how to choose all PC components based on the current market, or see the prebuilt PC guide for top picks on ready-to-go desktops.