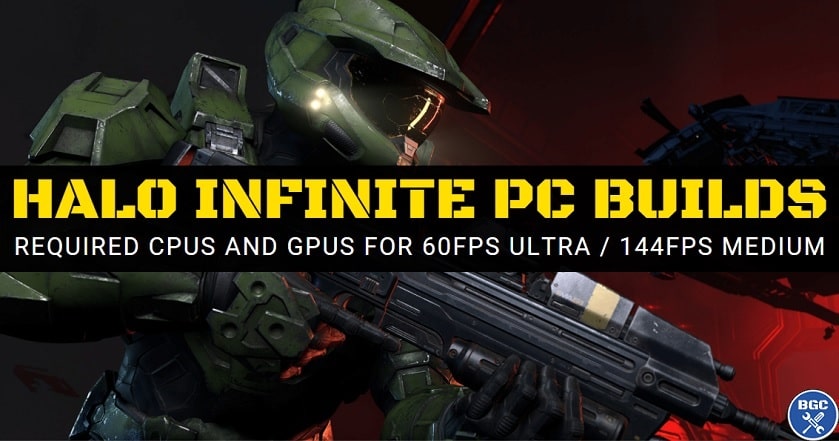 The immortal sci-fi series is back in style, with Halo Infinite recently launching with a lot of positive reactions to both its single player campaign and multiplayer. If you're upgrading or building a PC and want to ensure good performance in Halo Infinite, I've studied various benchmarks and condensed what you need to know to get smooth performance for your particular resolution and settings.

Benchmarks researched to base the following hardware recommendations off were a mix of both single and multiplayer, in order to give a general overview of which components you'll need no matter which mode you're playing. Though keep in mind that performance in multiplayer can vary a lot, so if you primarily play that then take these recommendations as more ballpark estimates.

Overall, Halo Infinite is a very demanding game on PC, and that immediately shows through in the fairly high official minimum requirements (which we'll get to next). It's a very GPU demanding game, but also a relatively CPU intensive one as well, though definitely more GPU-bound with even 1080p resolution requiring quite a strong graphics card to get high frame rates.

Before getting into hardware recommendations, as always let's first quickly discuss the official minimum requirements as listed on Steam. There's nothing of note to say about the modest minimum requirements, but the recommended requirements are fairly beefy. Relative to most PC titles, having a strong CPU and GPU like a 3700X/9700K and 5700XT/2070 listed within the official recommended specs is a fairly high bar, and hints at the game's demanding nature on both the GPU and CPU.

While these official recommended specs are quite high, you'll have a solid experience at 1080p with this sort of setup. Meaning that there's no real need to get anything stronger than this, assuming you're using a 1080p monitor and also assuming you're willing to tone down the settings.

You won't hit 60FPS consistently on maxed settings with the above specs. Now let's get into specific requirements for butter smooth 60FPS performance on either medium or ultra settings, and finishing off with what you'd need if aiming for an audacious 144FPS on 144Hz displays - unlike many other shooters, reaching over 100FPS and beyond in Halo Infinite is very hard and requires serious bankroll. 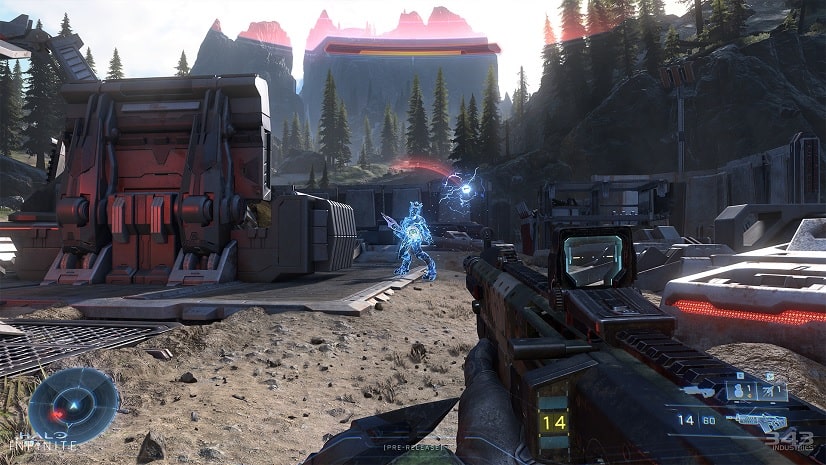 As KitGuru mentioned in their Halo Infinite benchmarks, at ultra settings Halo Infinite is a VRAM hog - even at 1080p resolution. For anyone new to PCs, be mindful not to confuse VRAM with general system RAM. VRAM (Video Memory) is the memory found on the graphics card itself.

Tests show that at 1080p Ultra, you can see up to a whopping 8GB of VRAM being allocated depending on the section of the game (on GPUs that have that amount of VRAM or more). This simply means that GPUs with less than 8GB of VRAM will struggle at 1080p Ultra, and you'll likely need to really tone down those graphics settings on mid-range GPUs that have 6GB of VRAM or less (if you want great performance that is).

Speaking of which, if you want to run the game on medium settings at 1080p and get near 60FPS, based on multiple benchmarks I've seen the cheapest modern GPUs I can suggest are the Radeon RX 5600 XT or GeForce GTX 1660 Super, with performance tests showing either hitting around 50-60FPS on average.

If you do want those ultra settings to experience the highest level of visual fidelity, to hit an average around 60FPS or thereabouts in most areas of the game on maxed settings you need to step things up to a RX 6600 or RTX 3060, both of which have that nice 8GB of VRAM to take full advantage of ultra settings (the RTX 3060 also comes in 12GB models too, which gives you plenty of headroom for VRAM-hungry titles like this, as well as being more suited for 1440p compared to its 8GB variant since higher resolutions use more VRAM).

These are the best value graphics cards for 1080p Ultra, though they'll definitely dip under 60FPS in many areas of Halo Infinite, so if you're a performance snob wanting to avoid all frame drops for a flawless experience, and with some headroom to take into account the performance discrepancies when it comes to multiplayer, you'll want a RTX 3060 Ti or RX 6600 XT (or better).

Halo Infinite is an AMD sponsored game, which explains why it doesn't support NVidia DLSS. Though it doesn't support AMD's competing feature either (AMD FSR). Without these performance enhancing features, at high resolutions like 1440p and 4K you and your poor GPU are on your own out there. Halo Infinite is very demanding on the GPU at such high pixel counts, so without a top-tier card you can kiss 60FPS at ultra settings goodbye. If you don't mind medium settings, or even high settings if you're okay with a potential average under 50FPS, a RX 6600 or RTX 3060 will get the job done for an okay 1440p experience on a budget. For the best 1440p setup, you'll need a more powerful card.

At 4K, GPU requirements obviously go through the roof for such a GPU demanding game like Halo Infinite. CPU recommendations remain the same as per the 1080p and 1440p 60Hz recommendations, as higher resolutions place more demand on the GPU (and not the CPU). Put another way, if a certain CPU can hit 60FPS at 1080p, it's also totally fine to use for 4K 60FPS gaming.

Unlike many other shooters on the market, achieving such high frame rates as 144FPS to take advantage of that 144Hz screen is a tough ask in Halo Infinite. If you have a 144Hz monitor, you'll want to tone down the settings without a doubt. No GPU on the market today can reach 144FPS in Halo Infinite on maxed settings - nope, not even at measly old 1080p, with the kidney-priced king of GPUs (RTX 3090) paired with a high-end CPU only pushing around 100 to 120FPS at 1080p Ultra.

Halo Infinite is also quite CPU intensive, so reaching high frame rates requires a very capable processor too. Just remember, as explained in detail in the CPU bottlenecks guide, you don't need a faster CPU for higher resolutions, but for higher refresh rates like 144Hz (ie frame rates), you most certainly do. The best value high-end gaming CPUs right now are the 12600K and 5600X, which are capable of hitting 144FPS in Halo Infinite assuming your GPU checks out for your resolution. I've left out cutting edge 4K 144Hz monitors as it's not a feasible combination of resolution and refresh rate for such a GPU intensive game.

Lastly, judging from multiple benchmarks and reports out there, AMD cards seem to have a slight edge in this particular title, providing slightly higher performance than NVidia. The game is an AMD sponsored one after all, so it makes sense that their cards end up being the slightly more optimized ones (at least at this moment, and future updates to the game may even things out).

So I would slightly favor AMD cards if you want the absolute best performance in this particular title, but the performance differences aren't huge so it's not going to matter much. Anyway that wraps my thoughts on choosing optimal hardware and building the best PC for Halo Infinite. Good luck and GG.