Is Buying a Used Graphics Card Worth It?

Since the graphics card is almost always going to be the most expensive part of a gaming computer, hunting for a used GPU (Graphics Processing Unit; just another word for graphics card) is a good way to save money on your PC build.

But as a wise old dude in the desert once famously said,"You'll never find a more wretched hive of scum and villainy". Doesn't take a Jedi to know Obi Wan was of course referring to the used PC market; a hazy maze filled with occasional deals, a whole lot of duds, and savage sellers who'll take full advantage at the first signs of noobery.

See Also: Should You Buy a Used Mining GPU?

Alright, alright, I'm being a little hyperbolic, and most people are good and won't rip you off, but you must be on your toes when buying any used stuff, and especially so when it comes to expensive tech like graphics cards where there could be any number of potential issues with the product. Then there's the reality that some sellers try to sell overpriced tech to those less aware of market prices and conditions, something that's possible due to the often oscillating nature of tech (goes up and down all the time).

A little understanding of the market goes a long way to finding a fair deal and to not get ripped off, as well as some know-how in regards to navigating used markets. So, if you're hunting a second-hand graphics card this year, in this guide I'll cover some key things to know when buying a used GPU (in my opinion based on my first-hand experience buying and selling hardware over the years). We'll also finish off with the most popular places to buy used graphics cards in North America, the UK, and Australia. Let's get to it.

Should You Buy a Used Graphics Card? (The Risks)

The main risk of buying a used graphics card is that it dies on you a few months, weeks, or even days after buying. The main causes of premature failure are:

When assembling a new gaming PC, the graphics card will almost always be the most expensive component of your parts list, so if you buy a dud that turns out to have issues, and you don't buy with protection (explained next) so you can get your money back - it's going to sting. But the potential savings is worth it to many, and if you keep your wits about you it's not that hard to do safely. PC builders buy used GPUs all the time.

But whether it's worth the risk or not; only you can answer that question, and depends on how comfortable you are with whatever method/platform you use to buy your card. If you're buying in-person and are comfortable dealing with people, with the confidence to ask all the necessary questions and decent sense of awareness to sus out a suspicious seller who may try lying to your face - I'd say go for it. 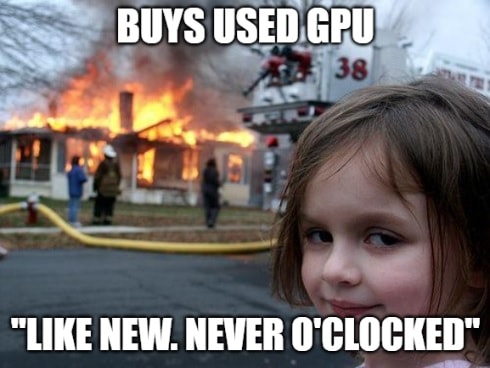 Since they're a popular buy on the used market, if you're wondering what a fair used price is to pay for the last-gen NVIDIA RTX 20 series, here are my ballpark recommendations based on their performance relative to the latest (but expensive) RTX 3000 cards. When buying a used GPU, there's nothing wrong going further back in time and picking up an old GTX 1000 series card if the price is juicy, but ideally you want to stick to the current or previous generation so that you get your hands on modern tech. The more recent the card, the more power efficient, the higher the likelihood of it still being under warranty, and the higher resale value it'll have should you decide to sell it later.

Nothing wrong paying a bit more than these prices if you can't be bothered waiting too long to snag a solid deal, but these are the maximum prices I'd personally pay if I were buying these models.

AMD's most recent RX 5700 and 5700 XT cards are good overall value for money buys, so here's a general guideline on what a fair used price would be right now considering the new RTX 30 series launch and the fact that new AMD GPUs will release later this later (RDNA2, AKA Big Navi). As for the RX 570 or 580, those cards are getting quite old now and I would personally avoid buying them used, besides also being a higher chance of being a mined card (they're still fine to buy new at the right price though for budget builds).

Tips to Buying a Used GPU (What to Look for & Ask)

Here's some basic things to keep in mind when hunting for used graphics cards if you perhaps don't have much (or any) experience with buying used tech. Just keep in mind that this, like the whole article, is simply my own opinion from experience (so take it or leave it, but I think it may be helpful if you're new to this). Also check out the used mining GPU buyer's guide as well for extra tips related to that.