Should You Replace GPU Thermal Paste? 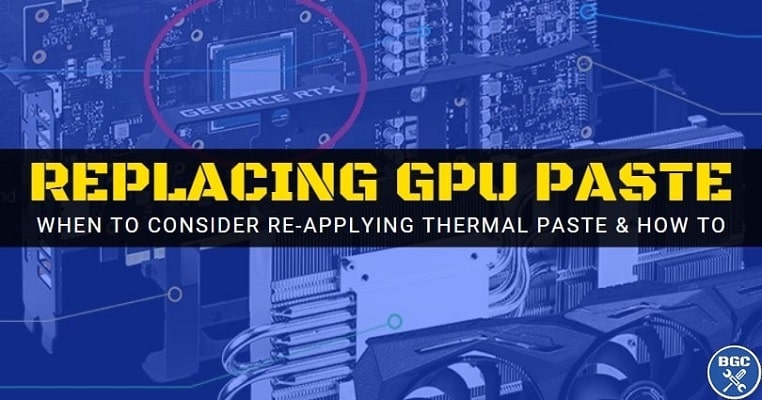 Like CPUs, GPUs (AKA graphics cards) also require thermal paste (or thermal compound, same thing) to be applied between the PCB (Printed Circuit Board) and the heatsink in order to more efficiently transfer heat, which is then blown out by the GPU fan/s.


When is Replacing GPU Thermal Paste Worth It?

If you bought a used mining GPU, or even a graphics card that wasn't used for cryptocurrency mining but that's been through years of use, you may have heard people recommend replacing the graphics card's thermal paste in order to refurbish it somewhat to improve its condition (and extend its longevity). Even if you didn't just purchase a second-hand card, if the card you own isn't performing as it once was (running at higher temperatures or even thermal throttling), common advice given out in hardware circles is to give that GPU paste a makeover to make things run better.

But should you replace GPU paste, and is it worth it? Generally speaking, yes, replacing thermal paste on a GPU can work wonders if a card is a few years old (say, 3-4 years or older, but it depends on how much it was used). Replacing the paste is also easy to do (explained later), and if you do some digging around online you'll see plenty of success stories of those who noticeably reduced their GPU temperatures, with some even seeing slightly better gaming performance as a result (higher FPS).

That said, there's no guarantee that your particular setup will benefit from a GPU re-paste. It all depends on how dry, hard, and therefore inefficient the thermal paste on your particular card has become over time, which will mostly depend on how heavily you've used the card.

Even if a graphics card is a few years old, replacing its thermal paste may not change anything whatsoever, and there is the slight risk of actually making things worse if you were to get lazy and mishandle your card when disassembling it or if you incorrectly applied the new paste (too much or too little thermal paste can cause temperature issues).

Disassembling your GPU and replacing the paste may also void the warranty, though to be fair that's a moot point for most people because of the fact that you should only consider replacing GPU paste on older cards, which will almost always be past their warranty period anyway.

Furthermore, replacing thermal paste isn't the only way to solve your GPU temperature or performance problems, and before going ahead with the job you want to first consider other simpler solutions such as improving case ventilation if you think that could help (ie adding or upgrading computer case fans) or simply removing any dust buildup on your GPU fan/s.

If after doing some research you come to the conclusion that replacing your GPU thermal paste could indeed be the answer, let's look at what's involved in doing so, including links to further resources I can recommend if you want to go deeper on the details (this guide is meant as an overview for the hardware novice). Alright, let's get into the technical stuff.

How to Disassemble GPU and Reapply Thermal Paste

If you decide to go ahead with replacing your GPU's paste, here's what you'll need:

Oh and don't forget to take note of your GPU temperature and frame rate when gaming before going ahead with the paste reapplication. When you're ready, here are the steps to cleaning and reapplying GPU paste (videos linked at the end if you need to see someone do it in action).

Make sure your computer is turned off and unplugged from the wall. Before touching components, ground yourself by touching a metal object or wearing an anti-static wrist strap if you're working in an area prone to static electricity build-up (ie carpet everywhere). Now open up your computer case and unplug any power cables connected to the graphics card from your power supply.

Using a screwdriver, undo the screws securing your graphics card to the rear of the case. Now, find the small lever (ie release clip) underneath the card that is securing it to your motherboard's PCIe slot. Unlock it by pressing it down or to the side (you may also need to hold it while lifting the card up).

Now gently lift the card up and out of the slot, holding it by its sides. Gently place the card on your bench or table, with the fans facing downwards so that you can access the back (where the screws are).

To access the actual GPU chip (metal block) where the thermal paste is, you need to disassemble the card. Exactly how you must disassemble a graphics card can vary from model to model, but on many cards it's simply a matter of removing the 4 screws that surround the GPU core (around the middle of the card) as shown in the image below.

Once these are removed you should be able to detach the HSF (Heatsink and Fan) module from the PCB (Printed Circuit Board, the main electronic board of the GPU) module. Just make sure to do it gently and don't pull too card, since the fan/s of the card are plugged into the circuit board (you don't want to accidentally pull on these cables as you could damage them).

Once you've detached the two main modules of the card from each other (if they don't come apart fairly easily, make sure you've removed all necessary screws, though you may need to pry them apart with gentle force if the thermal paste has really dried up), unplug the fan cable/s from the GPU if you want extra room to move (and remember to plug them back in later).

As I said, you might only need to remove 4 screws, but some cards may require other smaller screws on the back of the card to be removed as well (perhaps all of them) in order to be able to detach the HSF, and sometimes even screws on the side of the card. Oh and make sure to remember which screws go where, for when you have to reassemble the GPU (lay out any screws you need to remove onto your work bench in the same pattern/location if you get what I mean).

To disassemble a GPU, you'll often just need 4 screws to be removed

Once you've removed the necessary screws on the back of the card and gently detached the HSF from the PCB, it's time to get rid of the existing paste. Add a small amount of isopropyl alcohol to your lint-free wipe/cloth or paper towel/tissue, and wipe away all the thermal paste from the main GPU chip (the metal block in the middle of the card) and from the heatsink as well. Use as many wipes/cloths/towels as necessary to completely remove all paste.

Before going ahead and applying new paste, you want to make sure the GPU chip (metal block where the paste will go) is completely clean of any dust or debris. Even small amounts of this can get in the way of optimal cooling performance, and the cloth/wipe you used may have left behind some residue. Use your can of compressed air or a small brush to dust off the GPU chip. While you're at it you want to also remove dust from the heatsink and the GPU fan/s.

Once the GPU chip is clean, apply a small blob of new thermal paste onto the middle of the GPU chip. Applying GPU and CPU thermal paste is the same process, and it's also fine to use the same thermal paste you used when installing your CPU cooler for your GPU as well. You also do not need to spread the paste to cover the whole GPU chip (some people do this, but it's not necessary).

As for how much thermal paste to apply to your GPU, you want to use roughly the same amount as for a CPU, so a blob in the center the approximate size of a green pea (or a couple of grains of rice). A little bit more than that is fine, but you don't want too much as it could negatively impact performance (as could not using enough). What you're aiming for is a blob that's not too big, and not too small, that will be enough to cover the GPU chip once you press the heatsink on top of it.

Reassemble the graphics card, making sure you tighten the screws in a slow, methodical manner where you do a few turns on one screw, move to another screw on the other side of that screw and do the same, and continuing in this manner until they're all nice and tight. In other words, you don't want to fully tighten one screw at a time, as this could lead to uneven assembly (or could even damage something).

This is good practice when installing PC parts in general. Oh and you don't want to over-tighten the screws either - turn them until they're nice and firmly tight, but don't continue turning with excessive force. Once your GPU is assembled again, install the GPU into your case and load up your favorite game to re-test those temperatures and frame rates. Fingers crossed your efforts have made a difference.

The steps I've outlined above are meant as an overview of what's involved in the process, so if you're inexperienced with hardware I recommend checking out this video, this video and/or this one to see someone disassemble a GPU, clean it, and re-apply paste. Just one of these videos is enough, or watch all three if you want slightly different perspectives on whether you should replace/upgrade GPU thermal paste and how to go about it.

Anyway, hope this article helped and if you see a significant change after repasting your card and want to flex, let me know the results of your experiment in the comments below. And as always, any and all general feedback is also welcome.