How to Install a Graphics Card Step by Step 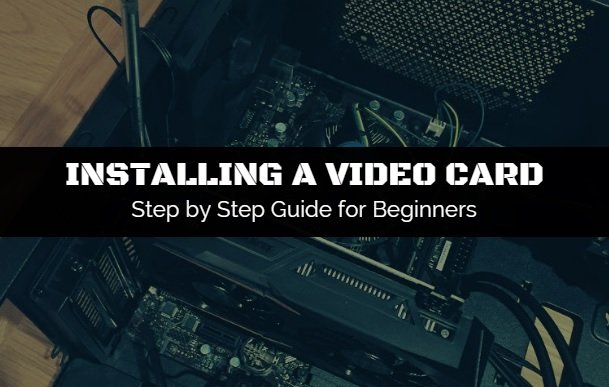 Installing a video card into your PC is a very straightforward part of building your own computer, but if you want to know the steps to GPU installation we've got you covered in this walkthrough guide for dummies. Included are photos from a recent real-life build we assembled to help you understand the steps more clearly. For most builds, learning how to install a graphics card and then applying the steps yourself shouldn't take you more than a few minutes, unless you get unlucky and encounter space issues within your case or on your motherboard if you perhaps bought a large video card and forgot to manually think about potential compatibility problems when you planned your build.

See Also: How to Choose a Video Card for Gaming (Features 101)

Our comprehensive all-in-one PC building manual for beginners includes the installation steps and photos for all components, along with all other key information to know as a beginner from around the site in a single, convenient guide that leaves out the fluff and that also includes exclusive bonus chapters on maintaining, upgrading, and tweaking your first build. 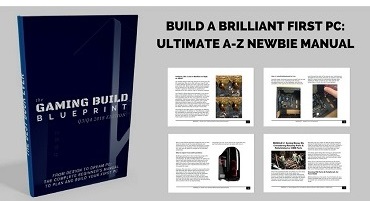 Steps to Installing a Graphics Card:

1. Find the Best PCIe Slot to Install the GPU

All modern graphics cards fit into a PCIe (PCI Express) slot on your motherboard. Specifically, you install the GPU into a PCIe x16 slot, which is a full-sized slot and not one of the short PCIe slot which are used for other components like wireless desktop adapters. If your motherboard only has one full-sized (x16) PCIe slot, that's where your bad boy is going to go just like with our own microATX motherboard for this example build: 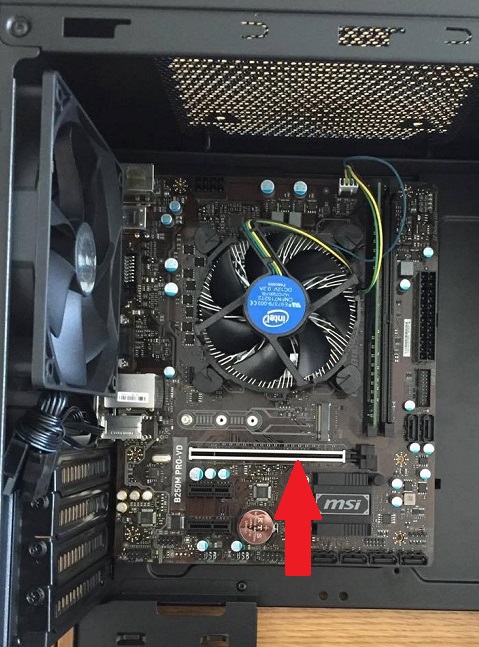 For full-sized ATX motherboards (or larger) you might have 2, 3 or even 4 full-length PCIe slots, in which case you'll want to install the graphics card into the top/first PCIe slot (the one closest to the CPU) unless there's a reason for you not to do so, such as having an extra large CPU cooler in the way that means you would have to install the graphics card in the second slot. 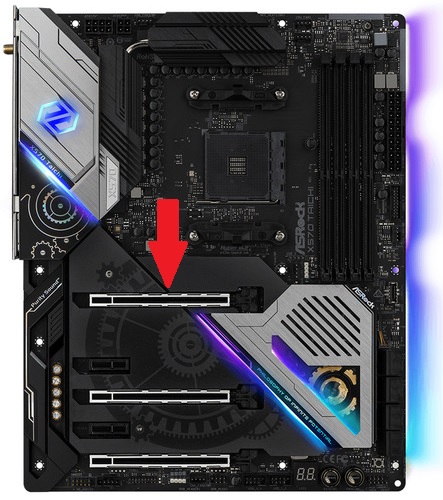 If your board has more than 1 PCIe x16 slot, install the GPU in the top slot if you can

Does it Matter Which Slot You Install the GPU?

The first PCIe x16 slot is guaranteed to run at x16 speed, but with the second or third PCIe slots, there's no guarantee it will run at x16 - even if your motherboard specifications list those additional slots as x16. The thing is, it could physically be a x16 slot, but actually run at x8 (confusing, I know).

If that's true for your particular motherboard, try to use the first slot somehow but don't worry too much if you have to install the graphics card in the second slot as the performance difference between a GPU running at x16 vs x8 isn't something you're going to notice. If you install the GPU in the second slot and want to check what speed it's running at, you can use a tool like GPUZ.

To learn more, see the test done by GamersNexus on PCIe 3.0 x16 vs x8. Their conclusion on this was as follows:

"From a quick look, there is a little below a 1% performance difference in PCI-e 3.0 x16 and PCI-e 3.0 x8 slots. The difference is not even close to perceptible and should be ignored as inconsequential to users fretting over potential slot or lane limitations." - Steve Burke, GamersNexus

Depending on how big/wide your graphics card is, you'll need to remove either one or two rear metal brackets in the back of your case by simply unscrewing them (some cases may require you to snap them off instead). If your GPU is either a 1 or 1.5 slot model, just remove one bracket. For 2, 2.5, 2.75 slot GPUs, you'll need to get rid of 2 brackets. See our guide to different GPU slot sizes if you're interested to learn more about this, but most modern GPUs will take up 2 case slots (as in, 2 rear metal brackets, not to be confused with PCIe slots) unless you're installing a small or thin graphics card. 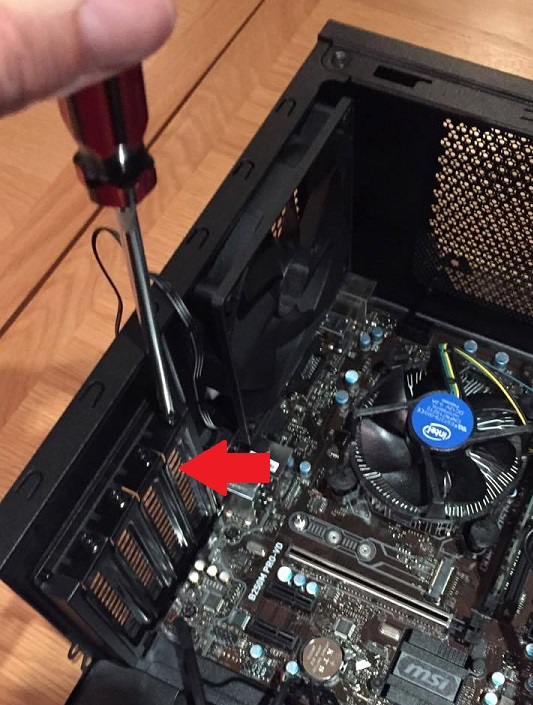 Unscrew the metal bracket/s next to the PCIe slot 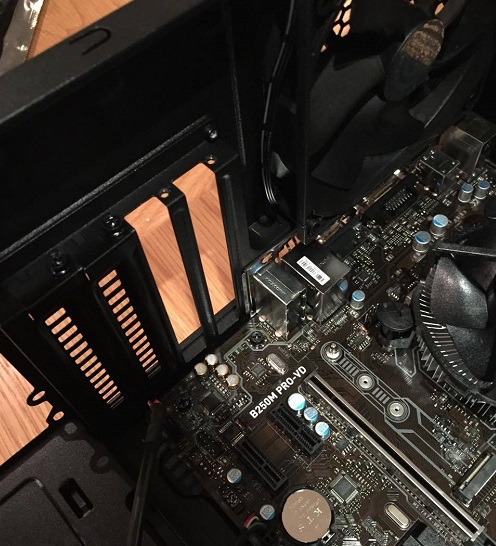 Our Gigabyte 1050 Ti OC is a dual-slot model, so we need to remove 2 brackets

Like with RAM slots, the graphics card PCIe x16 slot might have a clip (ie retention clip) that you need to unlock before you can install the graphics card. On some motherboards (like ours) the PCIe clip will also automatically lock back into place once you insert the GPU.

Now it's finally time for the king's entrance. As with handling all hardware components, before grabbing your GPU you want to ground yourself by touching a metal object (if you're not using anti-static PC building equipment like a strap or mat). Hold your GPU by its metal edge, and remove the cover over the bottom cutout of the card (the bit that you physically connect to the motherboard slot) if your card has one like our Gigabyte does. 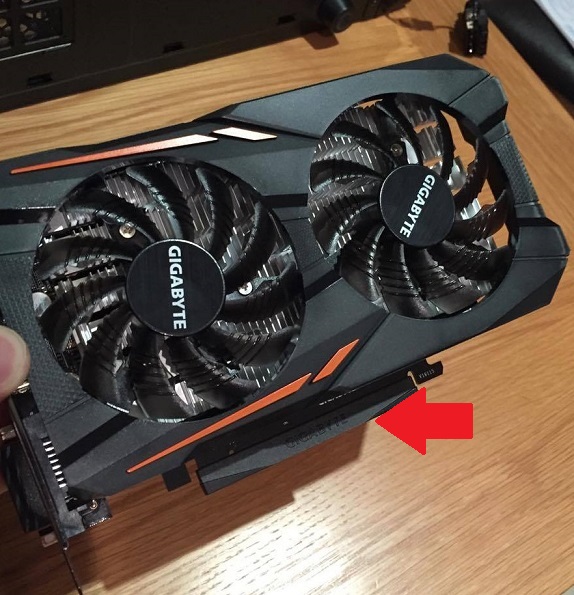 If there's a cover on the bottom, remove it before installing the GPU

Now, carefully lower your graphics card into the case, first aligning it to the back of the case in the proper position, then carefully inserting the bottom of the card into the PCIe socket on the motherboard. Ensure you've lined up the back and the connector of the card properly and securely, and give it a gentle but firm press down from the top of the card until you feel it's firmly in place.

As mentioned before, on some motherboards the PCIe retention clip may automatically lock back into place when the card is fully inserted. Otherwise you'll need to manually lock the clip by pushing it back into place. Check from the rear of your case that the connections (HDMI/DisplayPort etc) are lined up properly.

Now, re-screw the same screw/s that you removed in step 2 back into the top of the metal brackets to fully secure your graphics card into the case: 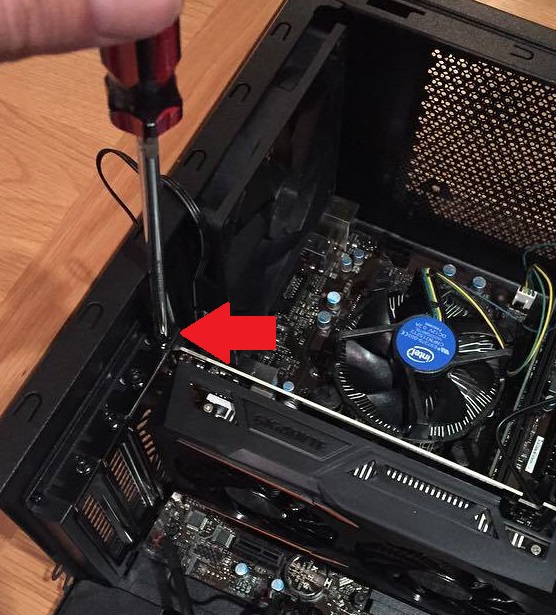 Lastly, if you're installing multiple graphics cards for SLI (see that guide for the steps and more details on SLI) or for AMD CrossFire, go ahead and install your additional card/s now. It's just a matter of installing all your cards in the right PCIe slots, and then installing your SLI bridge on top of them to connect the GPUs together (modern CrossFire setups won't need a bridge though).

Related: Should You Ever Replace GPU Thermal Paste?

Indie programmer currently working on my first game release (after years of hobby projects), an atmospheric story-driven VR FPS/adventure built with Unreal Engine to be announced once I'm ready here and here (for anyone into VR FPS's). Also likes writing about tech, which helps to fund development of the game.

My favs of all time are OOT, Perfect Dark, MGS1, MGS2, GE007, DKC2, THPS3, HL1, WC3, Vice City, and KOTOR, with the most recent addition to my list of immortals being the VR masterpiece Alyx.

If you want help with a new build or upgrade feel free to ask on the main PC builds guide. I try to respond to every comment. If you found the site real helpful and want to help support the work I do here, sharing an article with anyone you think might also benefit from it does help the site and is appreciated in advance. - Julz