Understanding Single vs 1.5 vs Dual vs 2.5 vs 2.7 vs Triple Slot Graphics Cards 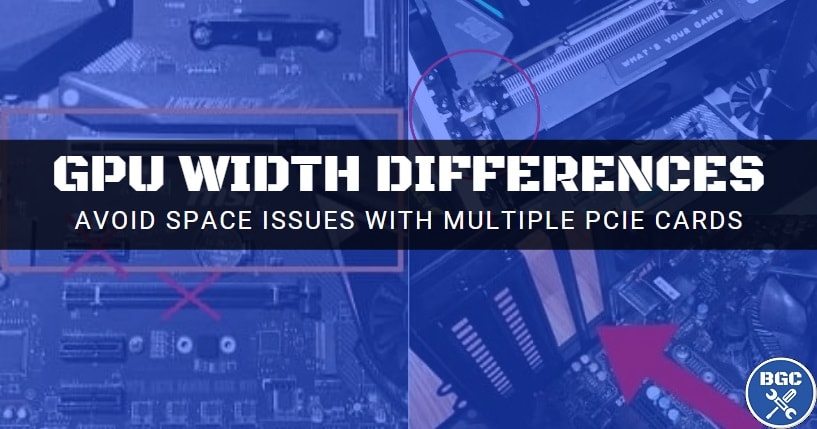 Confused about graphics card width compatibility with your motherboard and/or your case? Not to be confused with the length of motherboard PCIe slots (such as x16, x4, or x1), the GPU slot type refers to how many PCIe slots a graphics card takes up vertically, based on how thick/wide the card is.

In other words, how many PCIe slots the card "hovers over", rendering adjacent PCIe slots unusable. This article is not important for most PC builds, as chances are you probably won't even use adjacent PCIe slots (the slots right next to your graphics card), but in certain builds this information might be important.

See Also: The Best Gaming PC Builds for the Money

For example, if you have limited space on your motherboard (such as with mATX or mITX motherboards) and you want to install a large (wide) graphics card and another PCIe expansion card.

The slot type of your GPU might also be important if your case is small (perhaps when building a mini ITX computer) and it has limited rear expansion slots (those metal brackets you remove before installing a GPU) that cannot accommodate wide GPUs, as well as when using multiple graphics card (ie NVidia SLI).

The different GPU slot types are as follows:

It can be a little confusing because a graphics card may have different requirements in terms of how many PCIe slots it "takes up" (hovers over), and how many rear case expansion slots (metal brackets) they will need. 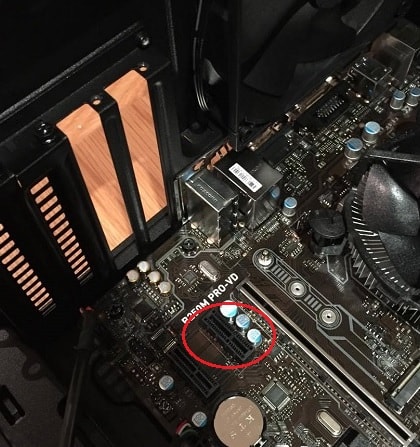 Installing a dual or 2.5 slot GPU (both use 2 rear case expansion brackets) means the 2nd PCIe slot is unusable

For example, a certain graphics card might take up 2 expansion slots in the back of your case (metal brackets), but might actually take up more than 2 PCIe slots on your motherboard (in this case it could be a 2.5 or 2.7 slot GPU). Anyway, let's break down the different GPU slot types so you can choose the right graphics card that's compatible with your PC build and avoid potential space/clearance issues.

See Also: How to Choose a Graphics Card (Specs 101)


What is a Single Slot Graphics Card?

A single slot GPU is the most compact of all GPU slot sizes and takes up the least amount of space in your case and on your motherboard. But what are the actual requirements for a single slot graphics card? In this instance it's simple, as a single slot GPU needs both 1 PCIe slot available on the motherboard, and also 1 rear expansion slot in your case. Because they are thin, they won't cause space issues on a near PCIe port.

The width of a single slot graphics card

The EVGA GT 1030 SC Single Slot Graphics Card is an example of a modern single slot GPU on the market, and with this particular GPU it actually has "single slot" in its actual model name. But most cards won't, and so to find out the slot type of a card you'll need to have a look around the product listing, or better yet check the manufacturer's website for the official specs and it should be listed there. Also keep in mind the spec could be listed differently from card to card so look for a spec called slots/width/height/thickness (it can technically be referred to as width OR height because it depends what angle you're looking at your build from ;p).

A GPU that's listed as having 1.5 slots will only take up 1 rear expansion slot on the back of your case, just like a card that's listed as having 1 slot, but its size/width is a bit bigger than a single slot GPU and therefore you will need a bit of clearance directly below the card. In other words, a 1.5 slot graphics card could use up a bit of the PCIe slot directly under the one you plug your card into (if your motherboard has a 2nd smaller PCIe slot directly under the first PCIe x16 slot).

The width of a 1.5 slot graphics card

When the manufacturer lists a card as having 1.5 slots, it's not an exact measurement, but a heads-up that you could have clearance issues if you want to install another PCIe card right next to your graphics card (it may or may not fit depending on the size of that additional card). An example of a current 1.5 slot GPU is the EVGA GeForce GT 1030 SC 2GB GDDR5 Low Profile Graphic Card, which will fit in 1 slot (1 PCIe slot and 1 case expansion bracket) but will hover over the adjacent slot:

What is a Dual Slot Graphics Card?

The width of a dual slot graphics card

That means your 2nd PCIe slot, usually a small PCIe x1 slot (if your board has 2 full-length x16 slots then the 2nd one will usually be further down on the board), won't be usable for other add-on cards like WiFi adapters (as pictured in our photo near the beginning of this guide). If you did have another PCIe card to install (other than your GPU), this isn't an issue if you have another PCIe slot further down that's free to use (full-size ATX boards will). Smaller motherboards may not though, hence why thinking about PCIe slots and your GPU width is more important for small builds such as with mITX cases.

Dual slot GPUs are perhaps the most common these days, as most cooling solutions on modern GPUs take up a bit of space (and being installed in 2 rear case slots instead of 1 is more secure and stable). A picture is worth a slab of fugly text though, so if you're still confused as to what a dual slot graphics card means then enter an older dual-slot Gigabyte GTX 1050 Ti build I did which shows it taking up both 2 rear case expansion slots and 2 motherboard PCIe slots:

Now we start getting into the larger/wider models, and if you've read until now you should already know what a 2.5 slot GPU means. Like a standard dual-slot GPU, a 2.5 slot graphics card will require 2 free expansion slots in the rear of your case, but it will also fully cover 2 PCIe slots on your motherboard - and then some. As you can see in the image below of a typical 2.5 slot graphics card, the width/height (depends on the angle you're looking from) extends a bit further than the 2 metal slots due to the cooling/fans of the card.

The width of a 2.5 slot graphics card

It won't fully cover 3 slots like a triple-slot card would, but if your motherboard has its first 3 PCIe slots all directly next to each other, it may (or may not) not render that third PCIe slot unusable (depending on the width of the card you want to install in that third slot). 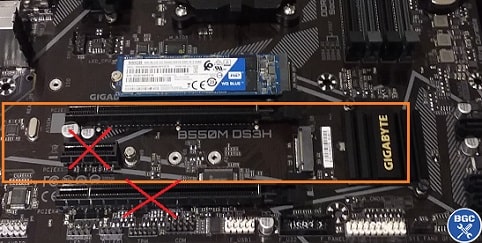 If you're wanting to see a real-life example of a 2.5 slot GPU, the MSI GeForce RTX 2060 6GB Gaming Z is exactly that:

Then there's also 2.7 slot GPUs out there in the wilderness, which may be officially listed as 2.75 slots instead in the specs, but they're essentially the same thing as GPU slots aren't official measurements by the manufacturer and only an estimation (there is no specific, universal slot size/width/height).

As you can imagine, 2.7 and 2.75 slot GPUs are slightly wider/taller than 2.5 slot models, with a modern example being the EVGA GeForce RTX 2080 Ti FTW3 Ultra Gaming Graphics Card which isn't something you want to be going anywhere near if rocking a small form-factor case and/or motherboard:

What is a Triple Slot Graphics Card?

Yup - it's getting a bit ridiculous now, but don't worry as we're at the last GPU slot type. Although, believe it or not, technically there was actually a frightening 4-slot monster released a few years ago, but you're never going to see that on a modern card (let alone a true 3 slot one). You know the deal by now; a triple slot GPU will need 3 rear I/O expansion slots in your case, and will fully cover/hover/block/dominate over an entire full 3 PCIe slots (if your motherboard has 3 PCIe slots all next to each other).

These things are super-wide beasts as you can imagine, taking up a wide area in your system (though 2.7 slot GPUs are not far behind in terms of size), but they are quite rare and I can't think of any recently-released triple-slot cards on the market right now (though there are plenty of 2.7/2.75 slot models).

There's just no need or real-world advantage of 3 slot cards, even with high-end high-powered GPUs, hence why we don't see them often (and they now seem to only be a thing of the past). Here's a side shot of what a true triple slot graphics card would look like: (the old ASUS GeForce GTX 570 Fermi for anyone wondering)

The width of a triple slot graphics card


Making Sure Your GPU is Compatible With Your Motherboard & Case

When it comes to GPU slots, keep in mind they're an informal measurement. In other words, a 1.5 or 2.5 slot card doesn't take up exactly 1.5 or 2.5 slots, and whether or not you'll have clearance issues will depend on your specific combination of case, motherboard, graphics card/s, other PCIe cards, etc.

But the most important thing to account for when checking if your graphics card will be compatible with your PC build is ensure you have enough slots for that GPU - and that means having both enough free expansion slots in the rear of your case (case specs should list this under "expansion slots", but for most builds you should have plenty unless you're using a very small case), as well as ensuring you have enough physical PCIe slots on your motherboard for both your graphics card and any other PCIe cards you'll be using.

If you're building a SLI system with multiple GPUs, you'll need to plan your slots more carefully. For example, if you're using two 2.5/2.7 slot GPUs, you will need 2 empty PCIe slots in-between the two PCIe slots you'll be connecting your GPUs in (so a minimum total of 6 available PCIe slots). Anyway, hope this guide helped you learn something new; I know I certainly did whilst researching and writing it, as I didn't know 2.7 slot GPUs were a thing.