Build the Best PC for World of Tanks 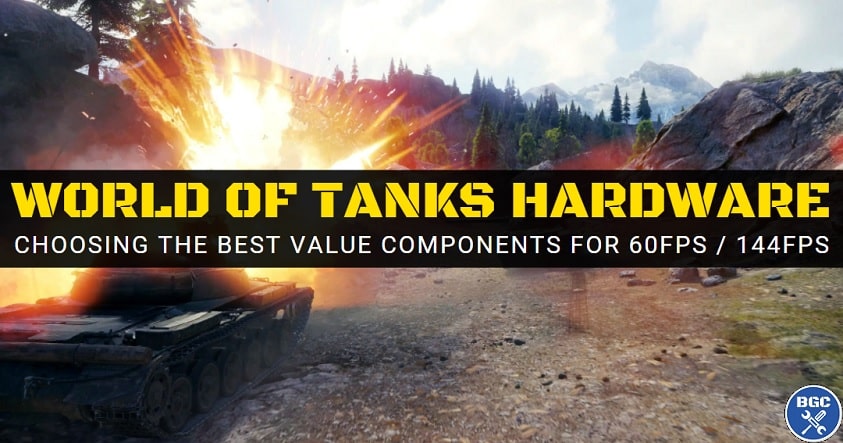 World of Tanks is a free-to-play MMO (Massively Multiplayer Online) featuring strategic team-based tank battles. Developed by Wargaming using their in-house Despair game engine, the graphics are quite good too, and at high settings and/or high frame rates the game can be quite demanding on PC. That said, the requirements for a basic 60FPS experience are not very high. In this guide we'll break down the minimum system requirements, and which modern CPUs and GPUs are the best bang for buck when building a new PC for World of Tanks.

World of Tanks System Requirements (to Run the Game)

As always, before getting into hardware recommendations let's briefly go over the official system requirements for World of Tanks (which you can find on Steam).

Those are some very low minimum and recommended specs, hinting at the fact that World of Tanks isn't a demanding game in general (and will therefore run well on any half-decent cheap modern PC). If you want to guarantee a silky smooth 60FPS for the best experience, let's get into requirements for that specifically (including requirements for 144FPS for those using a 144Hz monitor and wanting to take full advantage of it). 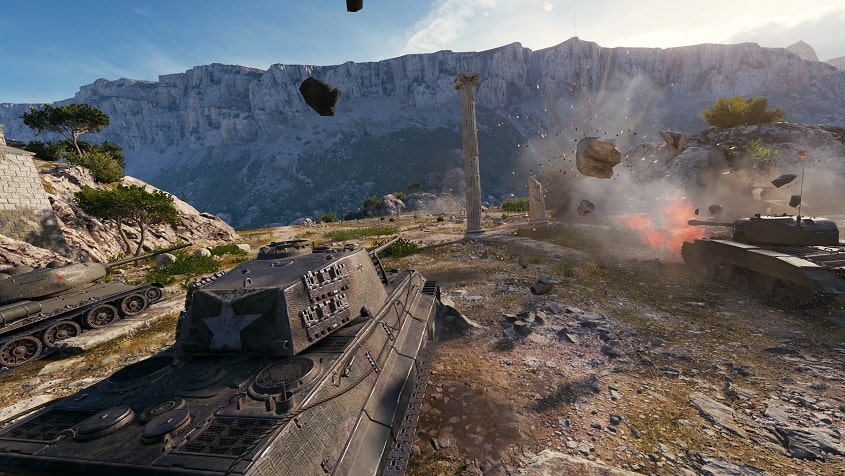 The visuals in WoT are solid and the tanks are detailed, accurate 20th century (1910s–1970s) era replicas

Starting off with 1080p 60Hz monitors, and hitting that magical 60FPS mark doesn't take much in WoT. Based on benchmark data from around the web, for the graphics card a NVidia GTX 1050 Ti 4GB is the minimum semi-modern GPU you’ll need to max out this game at 1080p (meaning, running the highest graphics settings) and get flawless performance that stays above 60FPS at all times. I say "semi-modern" because as I write this update to the guide, the 1050 Ti is now quite old and so if you're building a new setup today you'll want to look at a more recent equivalent GPU such as the RTX 3050, GTX 1650, or GTX 1650 Super.

Also keep in mind this is for ultra/max graphics settings, which can be quite demanding in this particular title relative to medium or high settings (which give you a noticeable increase in performance). So if you don't mind medium settings, you don't even need a graphics card to get 60FPS and you could get away with an integrated graphics solution such as the Ryzen 3 3200G or 5300G.

While NVidia cards seem to run a little more consistently than AMD ones based on different World of Tanks benchmarks that I've analyzed, AMD is totally fine as well for this particular title and it's not like the performance difference is massive. Plus, over time the performance gaps can decrease as a game matures and has regular patches added over an extended period of time (and same can happen in other games which may favor AMD-based graphics cards instead, where you seem to often see over time that any small lead that team red may have had near launch is flattened out over time after multiple game patches).

Anyway, if you choose an AMD graphics card for your World of Tanks setup, to get 60FPS on the highest graphics settings (called "Ultra") you'll want to eye off an RX 6500 XT. It's on the same level performance wise as NVidia's RTX 3050 or GTX 1650 Super, and is AMD's cheapest next-gen GPU. As for the CPU and RAM, hitting 60 frames per second in this title doesn't require much in terms of the processor and RAM/memory departments. Any modern entry-level Intel Core i3 or AMD Ryzen 3 is going to be just fine, and 8GB of RAM is more than enough for World of Tanks.

In fact, if building a new gaming PC these days you're best off getting 16GB, seeing as it's not too much more money than 8GB and really "future-proofs" your system (as well as maximining general system performance for multitasking and other programs, etc). If you're on a tight budget though, 8GB of RAM is still okay these days, and more than suitable for an older, generally less-demanding game like WoT (as I mentioned earlier it's not a very intensive title by today's standards).

Unlike First-Person Shooters, World of Tanks isn't a game that benefits all that much from fast 144Hz refresh rates. The gameplay is slower and more methodical overall. That said, there are moments in battle where you could theoretically benefit from the higher frame rate that 144Hz screens allow. I'm talking when lots of explosions are going off, and even when tanks are moving (though they obviously don't move all that fast). So while there isn't a huge need for 144Hz monitors to reduce motion blur in this particular title, if you do want to play at 144Hz because you already own a 144Hz monitor, and you want to make the most of it by reaching that 144FPS performance level (or thereabouts), you'll need to step up your specs considerably from the 60Hz recommendations above.

To get 144FPS in World of Tanks, any modern mid-range gaming CPU will be plenty, and for a modern GPU you're looking at a RTX 3060 or thereabouts (for ultra settings). Though a lesser card like a RTX 3050 would still be totally fine for 1080p 144Hz monitors, as you can just tweak settings a little. If you want 1440p resolution though, and want to hit that 144FPS, you'll need something beefy in the vicinity of a RTX 3070 or equivalent (again, for ultra settings - a RTX 3060 would still be great at slightly lower graphics settings).

Oh and there's also one caveat to using a high refresh rate for this game; the game developers have capped the frame-rate to around 120 and so you’ll need to manually unlock the FPS cap to get higher than that. Some players report their cap to be 125 or even 121 in some strange cases, but overall it’s not a huge deal as 120 frames per second is lightning fast, and even on a 144Hz monitor it’s still a very, very smooth experience as getting lower than 144 FPS doesn’t cause lag (like getting lower than 60 FPS on a 60 Hz screen does).

But, if you’re using a 144Hz (or even higher) monitor then you’ll likely want to get the maximum frame-rate possible to make full use of your screen (assuming you have the hardware for it), and so you’ll want to uncap that FPS to get over 120/125 FPS. A quick search around should easily find you a way to remove the cap if you're interested in doing so.

Related: How to Choose the Best Monitor for Gaming 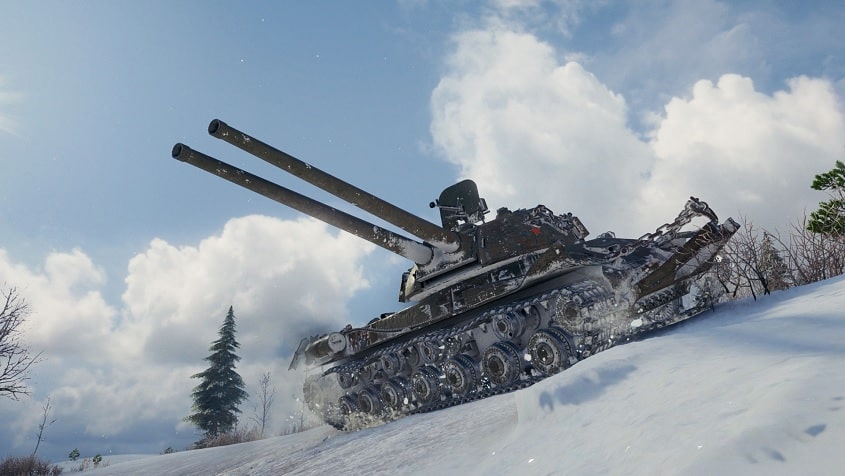 Not many competitive games are all that well-suited for the super high-resolution of 4K, since in most eSports you don't benefit from higher resolutions and are better off aiming for higher frame rates on a lower-resolution monitor instead (typically 1080p, which the far majority of competitive gamers use, especially for FPS and Battle Royale games, but also for MOBA and racing titles). But World of Tanks, while competitive, is more of a relaxed competitive title if you will, where 4K is a very viable option for a great experience no matter whether you're playing completely as a casual or as a more competitive one.

Which is why I often don't include hardware recommendations on this site for 4K unless it's a more visual-oriented casual title like Witcher 3 or Cyberpunk 2077. World of Tanks is somewhere in the middle, being a casual yet competitive title. Anyway enough rambling and let's get into the parts you'll need to reach 60FPS on a 4K 60Hz/75Hz monitor. A RTX 3060 Ti and any cheap modern CPU will get the job done, but if you're not trying to be cost-effective and simply want the absolute best GPU for World of Tanks at 4K, an RTX 3070 would be the absolute ideal (though completely unnecessary; a 3060 or 3060 Ti is much better value overall for this particular title IMO).

That wraps what you need to know about choosing hardware for a World of Tanks build. If you want to see how the parts mentioned can be used in full PC build example - including recommendations for all other PC components that make up a new working PC including the motherboard, power supply, case, and storage - see the full gaming PC build guide. Or, if you don't want to build your own PC, see the recommended prebuilt PCs section instead. Anyway hope this guide helped you plan a solid WoT setup and good luck.