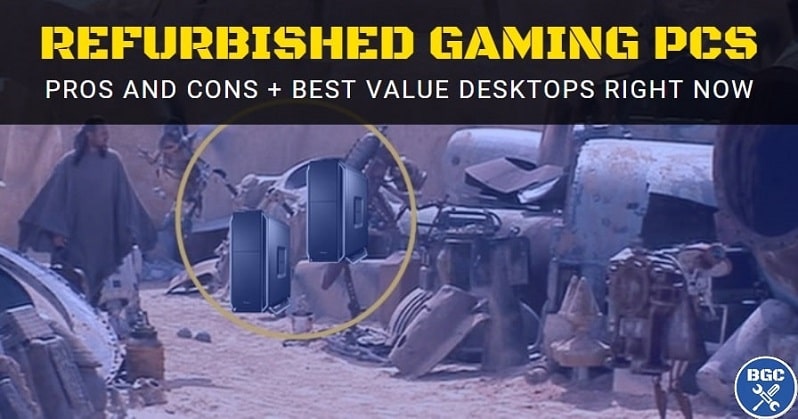 If you're set on buying a new gaming PC instead of building your own, hunting for a good refurbished gaming desktop is an option to consider that could very well be worth it, and something that not everyone is aware of. But if - and only if - you find a good-enough deal that's also from a reputable, trustworthy store and seller, and of course if you're comfortable with the fact that it's essentially a used product (albeit professionally checked and tested etc). Here we round up the best refurbished gaming PC deals we found on the current US market (mostly on Amazon who offer a 90 day warranty - more on that later). We'll also cover common questions about buying refurbished computers, including exactly what it means and what to be aware of.

What is a Refurbished Computer?

A desktop or laptop computer listed as refurbished could mean slightly different things depending on the particular product and which store it's being sold on, but in general refurbished means that a product has been tested and verified to work (as opposed to a used product that may or may have defects or be faulty). There’s no official standard for what exactly constitutes a refurbished product though, so depending on the store/seller it could specifically mean either:

Therefore, it's all about reading that a particular store's policy is regarding refurbished products, and judging refurbished deals on a case by case basis to determine whether it's worth it or not. Because you typically won’t be able to find out the exact history of a refurbished product, as a general rule of thumb you should only consider buying refurbished hardware from stores you trust so you know they’ve been professionally repaired and/or tested, and so you have some sort of guarantee.

Refurbished computers are returned and/or damaged stock that is then repaired, tested and cleaned for resale in new condition - at a discount.

Think of it like a middle ground between buying a straight-up used PC and buying brand new.

You typically get some sort of warranty too (albeit shorter than normal) which you don't always get when buying used.

Are Amazon Renewed PCs Worth It?

Amazon sells refurbished tech, but they refer to these products as "renewed". So in the context of Amazon, refurbished and renewed mean the same thing. They say that these products are professionally inspected, tested, and cleaned to work and look like new, and you can get a replacement or refund within 90 days if you're not satisfied. To know if a product on Amazon is renewed, it will say so at the end of the product title. Whether it's worth buying a renewed gaming PC on Amazon (or a refurbished computer from any other store) will come down to personal preference and how comfortable you are buying used products in general. I'd say it's generally safe when you buy from a place like Amazon as they have a high standard of quality, with a track record of happy customers who have had no problems buying refurbished products (as not just any random seller can list refurbished products on there).

But on the other hand, keep your wits about you, because renewed products on Amazon are sold by third-party sellers. They may have had to be approved by Amazon to sell refurbished goods, but you still want to do your research into a particular seller (click through from the product listing to their seller reviews) to get a sense of their service, trustworthiness, what customers have said about them, etc. It should go without saying, but don't impulse buy a computer without doing your pricing and store comparisons, and if a refurbished gaming desktop isn't all that discounted compared to the new version of the same model, perhaps it's not worth the potential trouble (and potential hassle of having to return it if something turns out to be wrong with it, despite it having been supposedly fixed/repaired).

Some of the Best Refurbished Gaming PCs (2020 Picks)

Let's get into some of the best refurbished gaming computers I could find right now at the time of writing this for anyone on a tight budget wanting to save as much money as possible, and of course if you don't mind having a used product that somebody else has handled, which is what refurbished computers essentially are despite having been fixed up (hopefully!) and tested. These range from budget refurbished gaming PCs suitable for entry-level 1080p gaming with older titles (that won't save you a crazy amount but still a little), to more high-end models capable of higher-resolution monitors that can save you more ($100-300+ in some cases).

Keep in mind these refurbished gaming desktops were decent deals (IMO) at the time of writing but prices may change at any time, so by the time you see this they might not be worth it (compare to some brand new prebuilt gaming PCs to judge a deal for yourself). If you find a better deal on a refurbished gaming computer on Amazon or another trustworthy site (that have a guarantee for buyers), please get in contact and let me know so I can share it here (and thanks in advance).

Dell offer a lot of refurbished desktops, but mostly business-oriented ones in small form factor cases that don't have graphics cards (and that don't have enough space for you to add your own card). However, if you do some serious digging around, you can find refurbished Dell desktops that do have gaming GPUs, or that give you the option to add your own. Here are the best ones we could find at the time of writing that are suitable for good gaming.

The difference between refurbished and used is simply that refurbished parts have been professionally tested and cleaned, and fixed where necessary, so you know there aren’t any defects and that it’s going to work. Plus, you get a warranty/guarantee of some sort (such as Amazon's typical 90-day renewed product guarantee). When buying used PCs, there’s no telling if something is defective or not, and there's quite a lot more risk - not good if you're not that tech-savvy. There's no telling how long a private seller has used their computer (despite what they might tell you), how they've looked after it, or thrashed it with overclocking. I would generally avoid buying used unless you're fairly confident in being able to check the PC thoroughly in-person before buying, so for most people, buying a refurbished gaming desktop is the safer way.

Should You Buy Refurbished Monitors/Peripherals?

Gaming monitors may also be a potentially good deal to get refurbished so long as they have some sort of decent warranty (I’d say ideally 1 year and 6 months minimum) and you’re fine with the possibility of getting a dead pixel or two. Monitors often get returned for this reason and then they are sometimes put straight back up for sale (yes, with a dead pixel) unfortunately, however a dead pixel is not the end of the world and some people wouldn’t even notice it. But yeah, so long as there’s some sort of return policy then you could always return it, so overall refurbished monitors can be a great way to save as monitors can quickly eat into even the healthiest of build budgets.

As for keyboards, mice, headsets, speakers, etc, these are also all fair game to get refurbished if you find a good deal as these parts either work or not. The only thing I’d probably avoid in this realm would be with mechanical keyboards, as each key is an individual mechanical component which could possibly fail early, so there’s a bit more risk involved especially if the warranty is short. Also, if you’re a pro or aspiring pro gamer who cares about every little microsecond of precision, speed and accuracy and you wish to grab a high-quality mouse, I’d personally only ever buy a new gaming mouse to avoid any potential issues now or down the road so you can game at your best at all times without having to worry about whether your mouse has a defect that may be hard to detect. Just my two Galactic credits on the matter.