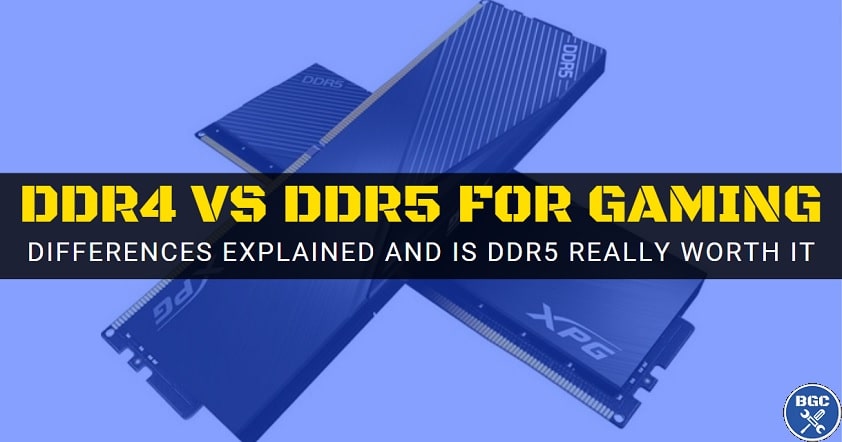 Wondering if DDR5 is worth it for your new gaming PC? DDR4 (Double Data Rate 4) and DDR5 (Double Data Rate 5) are types of dynamic random-access memory (DRAM), with DDR5 only fairly recently becoming available on the latest Intel and AMD platforms. DDR5 memory will eventually become the standard for PCs, but for now its predecessor DDR4 still remains relevant and worthy of consideration when building or upgrading a computer for gaming or work. Let's look at the differences between them, and whether or not DDR5 is worth spending the extra money on specifically when building a PC for gaming.

Differences Between DDR4 and DDR5

However, DDR4 is still widely used and isn't going away anytime soon, so don't expect it to become completely obsolete for quite some time (and by the same token, don't think of DDR5 as a necessarily must-have product for the time being). Plus, DDR4 is cheaper, with DDR5 modules typically selling for significantly more.

Since DDR5 is brand new to the consumer hardware market, only the very latest processors released by Intel and AMD support DDR5 memory. DDR5 is not backwards compatible with DDR4 or earlier versions of DDR memory, as DDR5 uses a different physical interface and operates at a different voltage and speed than DDR4.

Here are the CPUs that currently support DDR5:

Previous CPU series from Intel and AMD do not support DDR5, and only support DDR4.

* Intel motherboards can come in either DDR5 or DDR4 versions.

Is DDR5 Worth it for Gaming?

Now we get to the question that most of you building a new gaming PC are probably wondering. Should you buy DDR5, even if it's a little more expensive? Speaking of prices, the cost of DDR5 memory is slowly coming down over time and at the time of writing isn't typically all that much more expensive than DDR4 (though some higher-end DDR5 memory modules can definitely be a whole lot more costly than DDR4 equivalent models). That said, the overall cost of buying into DDR5 is still definitely higher than DDR4, as DDR5 compatible motherboards are more expensive than their DDR4 counterparts as well.

In terms of gaming performance differences between DDR4 and DDR5, if you look at memory testing benchmarks such as this one from ever reliable Techspot you won't see a noticeable difference in most games (though in some circumstances the FPS boost DDR5 provides is a bit more significant). We're talking a few percent faster performance with DDR5 vs DDR4, which doesn't translate to anything noticeable for most gamers (in other words, a typical gamer won't visually see a difference).

However, DDR5 is the future, so if you want the most longevity in your new system build in terms of being able to upgrade to future CPUs that will likely only support DDR5, I would spend the extra on DDR5 now to be a little more "future proofed" if you will. But if you're on a budget and wanting to squeeze out the most performance for your dollar today, DDR4 can save you money and you will hardly notice the difference when it comes to gaming performance.