What OEM Hardware Is, Difference Between OEM vs Original, & Buying OEM Windows

When looking to save money on a PC build, on top of various strategies like buying officially refurbished or renewed parts, buying a good barebone PC kit, or getting straight-up used private parts (came out wrong but a good laugh must stand), there is also such a thing as OEM parts out there in the hardware wilderness that you may or may not have come across before. In this guide we'll cover what OEM is about, the differences compared to regular retail products, and whether it's worth buying OEM hardware or software.

Related: Which Old PC Parts Can You Safely Reuse?


What is OEM Hardware?

Short for Original Equipment Manufacturer, OEM is a confusing term as the name doesn’t hint at its meaning. Technically speaking, an OEM is a company who makes a certain product and sells them to other companies like system builders to then sell to the consumer as a complete package (ie a full computer). But consumers are occasionally able to purchase OEM products directly, which is a bare or stripped-down version of a particular product that typically sells for less than the standard retail version and without certain touches like proper packaging, relevant cable/s, accessories, manuals, etc.

When you buy an OEM product such a hard drive or optical disk drive, you may not even get certain things that are required for operation. In the examples of OEM hard drives and optical drives, you might not get the SATA data and power cables you need to connect the hard drive or optical drive to the PSU and motherboard. Another good example is when buying OEM CPUs - you typically just get the CPU and not the cooler (if that particular processor normally comes with a stock cooler).

OEM parts will also typically have a shorter warranty (if any) and limited or no support. When browsing an online store an OEM product will either be described as "OEM" somewhere, but keep in mind they could also use the word "bare" or "tray" instead. Some people have accidentally bought OEM hardware in the past without actually knowing it was OEM until they received it and were disappointed, only to later realize that the listing had listed something like "tray CPU" instead. So watch out for that.

While OEM is a term mainly related to B2B company dealings behind the scenes (OEMs selling to system builders), there's still many places where you can find and buy OEM products directly as a consumer, as online stores don’t need to display any packaging to sell a product as compared to a physical location where having a full package on display is more important.

In terms of hardware components, the more common ones you’ll find available as OEM are hard drives and optical drives as mentioned, but you can also find OEM graphics cards, CPUs, motherboards - pretty much anything. OEM software programs are also a thing, but we'll get to that later in this guide when we discuss OEM Windows.

Is OEM the Same as the Original?

Yes and no. The actual bare hardware is almost always the exact same, but what you get for your purchase is not the exact same. Let’s use optical drives as an example to explain the difference between an OEM and a full retail version or a product, which is a common component that sells as OEM.

The full retail version of the drive will (well, should) come with the cable, full box/packaging, manual/install instructions, as well as any software CD/DVD that relates to the drive. With an OEM version of the same drive, you will just get the drive in a bag and/or box and that's about it (and a shorter warranty, or none at all). Since OEM products aren't intended to hit store shelves, there's no effort made to make it customer friendly or have attractive packaging. 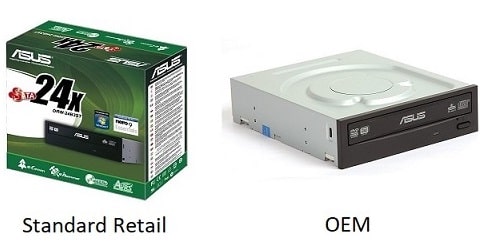 Should You Buy OEM Computer Parts?

The biggest benefit to buying an OEM computer part is obviously the lower cost, although don’t expect any huge savings as only rarely will you see a large difference in price between OEM and retail. Whether you should get something OEM will come down to personal preference and the individual product and price you’re looking at, how much you’re going to save compared to the full version, and what you’re missing out on by going OEM (full warranty, cable/s, documentation, drivers, box, support, etc).

For example, sometimes you may require something that only comes with a retail version (such as a cable or bracket or something), and so the lower-priced OEM version wouldn't be worth the cost savings. Also, if you’re a hardware beginner who likes or needs to know all the little details about installation and/or maintenance of the component, the instructions/manual may come in handy; OEM products are unlikely to come with this.

Overall, I'd recommend against buying OEM hardware parts, especially when it comes to crucial components like the CPU, motherboard, graphics card, et - unless you really know what you're doing. But for accessories or basic add-ons like extra hard drives or optical drives, OEM products are just fine (just make sure to have any necessary cables).

Should You Buy OEM Windows?

Software also have discounted OEM versions, with the most common you’ll likely consider when building a PC being Windows, but you can also get OEM versions of all the other programs that you install on a new PC build such as security, utility and productivity applications. Windows OEM is potentially a good buy if you can find it at a good price compared to the full retail version, however there are some things to keep in mind.

With OEM Windows you can only legally install it on the one computer, and you can’t move it to a new build in future, whereas the full version has more flexibility with this (more on this in our guide to reusing old parts for a new computer). Plus, OEM Windows doesn’t come with documentation, and has no tech support either.

So overall, OEM parts or software is absolutely fine to use in your PC build and can save you a bit of cash without too much downside, so long as you take the above into account. Physically, OEM products are identical to the full retail versions. One last thing to note about OEM parts in case anyone wonders about this, yes - strangely enough, sometimes the OEM version costs more.

This typically happens when a component is going into the end of its lifespan and spare stock is sold as OEM and marked up for the same or higher price as retail. In terms of where to buy OEM computer parts, there's no particular places that stand out as the best source to score them, and you'll see them from time to time at any typical online hardware store like Amazon.