The Best Headphones for Gaming and Music 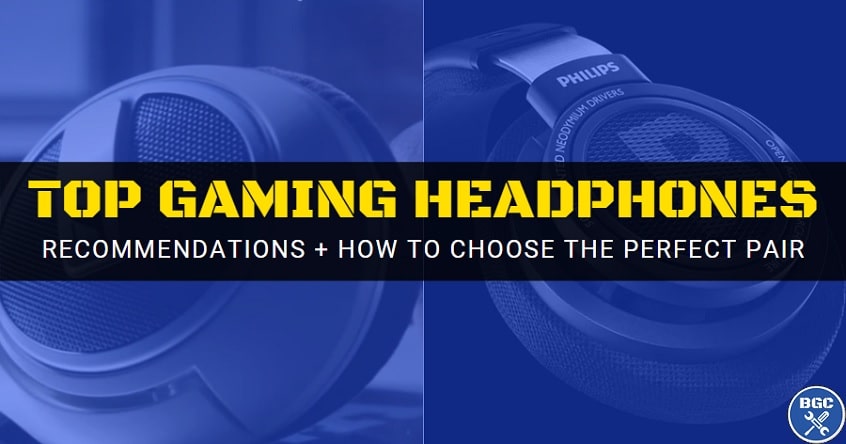 In this roundup review we'll be going over some of the current best headphones for gaming and music, to help you get the best quality and comfort for your money. Gaming headsets, which are headphones with attached mics and extra features marketed to gamers such as special software or cool aesthetics, are very popular these days. However, when compared to standard headphones, with gaming headsets you get less audio quality for the same price. In other words, just getting standard headphones, and adding your own mic if you need one (whether attachable or external on your desk), is the smart way to stretch your money furthest if you care about quality.

Don't get me wrong, there's nothing bad about getting a gaming headset as they are handy, and not all of them are bad (some have good quality). But buying some good headphones is the best way to get top-notch sound quality, and if you find good cheap headphones then you'll end up paying less than many gaming headsets (and you'll get better sound quality). And if you're looking to invest into the absolute highest quality sound, studio headphones are a no-brainer as even the best high-end gaming headsets on the market won't come close in terms of quality.

So if you don't need a mic, or you're just going to use a separate mic (which will also typically be better quality than most built-in gaming headset mics) then consider buying some good headphones for gaming like the ones below. This dual setup of using headphones and a separate mic is actually quite common among gamers who know more about audio, and as mentioned it can save you money too since gaming headsets can be quite overpriced. Anyway, let's cut the small talk and get into the best headphones for gaming and music listening, based on my own personal opinion and judgement, but also more importantly on the opinions of much more in-the-know audio professionals that I have done my best to learn from around the web. At the end of the article we'll wrap with an explanation of various specs.

The Behringer HPS3000 are a good example of how you can save quite a bit of money opting for non-gaming headphones instead of a headset marketed for gamers which are sometimes a little inflated price-wise because of better aesthetics and add-on features that you don't always need.

For example, 7.1 surround sound is a feature often marketed for gaming headsets, but the reality is you don't need this feature as a good quality stereo headset can be just as good if not better when it comes to quality and directional sound. 7.1 for headsets is not real surround sound; it's virtual surround sound.

The Behringer HPS3000 will offer similar quality sound to gaming headsets that sell for more than this, and if you need a microphone you can always get a cheap add-on mic like the Zalman Zm-Mic1 or V-Moda BoomPro which are both good value.

With more to invest the Audio Technica AD500X is another excellent value buy that'll outperform many gaming headsets (in terms of sound quality) that sell for more. These are designed for audio mixing and general listening, but it'll work just as well for some seriously great sound for gaming. Audio Technica, along with Sennheiser, are one of the premiere brands when it comes to trusted quality for sound, and this is one of their best value options right now. Just keep in mind the AD500X is an on-ear, open-back style, meaning that it doesn't insulate sound inside your headphones. So if you don't want people around you to hear the sound, go for over-ear headphones instead (which are almost always a closed-back design, and therefore trap sound inside).

It has an open-back design which releases pressure on the ears, making for a very natural lightweight feel great for those longer gaming sessions. The self-adjusting wing-style headband also adds to making this a seriously comfortable fit. Again, if you want a mic, getting a cheap add-on like the Zalman Zm-Mic1 or V-Moda BoomPro will get the job done nicely if you don't need the best mic around. The Philips Audio Philips SHP9500 is another great bang for buck choice in this price range that doesn't disappoint when it comes to sound quality as it also has an open-back design like the AD500X. Choosing between the SHP9500 vs the AD500X is a tough choice as they're both excellent value headphones for gaming, music, and even audio production, and I could have easily picked one or the other as the top recommendation here. You really can't go wrong with either.

If you just want the best of the best, the Audio-Technica ATH-M50x are top-notch studio headphones that deliver superb audio quality, and are very well received across the audiophile community. Their over-ear, closed-back design are ideal if you want to prevent sound leakage, whether to prevent people around you from hearing your headphones, or to prevent outside noise from getting in the way of your experience.

We've included the 599 SE here as our recommendation over the previously recommended Sennheiser HD 598 SR, as the 599 is almost identical to the 598 but at a much better price (and the bass is reportedly slightly better too). At this level of investment you want to start considering a dedicated sound card for your PC to make the most of such high-quality headphones (and same for the ATH-M50x), though keep in mind that built-in audio on any half-decent modern motherboard is very good these days (hence why sound cards aren't common these days). But if you're super picky about sound, and are investing in top-notch headphones like the ATH-M50X or 599 SE, sound cards do make sense (whether internal PCIe or external DAC).

Open vs Closed Headphones for Gaming

Headphones vs Headsets for Gaming

What is Frequency Response in Headphones?

What is Impedance in Headphones?

Headphone impedance is a measure of the electrical resistance of the headphones. Measured in ohms, impedance can affect the way that a pair of headphones sound and how they interact with devices they are connected to. Headphones with low impedance tend to have a resistance of less than 25 ohms, which makes them easy to drive and produces a consistent sound across different devices.

Headphones with higher impedance typically have a resistance of more than 25 ohms and often require more power to produce a consistent sound. High impedance headphones may have greater dynamic range and better sound quality, but they aren't as compatible with portable devices as they could require more power than the device is able to provide. When choosing the best headphones for gaming and music, the impedance of the headphones in question is a fairly important spec to be aware of, as well as the output impedance of the device they will be connected to.