Is Memory QVL Important When Choosing Compatible RAM for Your Motherboard? 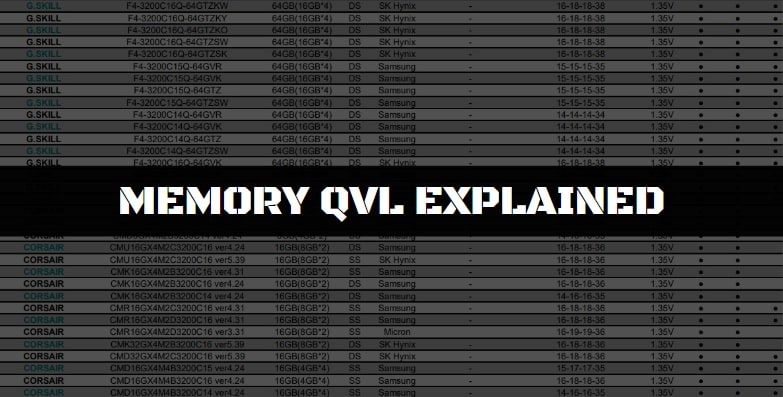 During the planning of a new gaming/workstation PC build (or if you're simply upgrading the RAM on your current system), when choosing RAM to buy you may stumble upon something called the QVL and wonder what it is exactly, and whether or not it's important to worry about when choosing compatible memory for your motherboard.

In this article we'll clear the air a little on this slightly-confusing, grey-area of a topic. It's hard to get a straight answer on the matter - even from manufacturers themselves. Ask a support technician about the QVL and its important and you'll likely get different answers depending on who you talk to. Same thing goes for forums and hardware communities; some enthusiasts will say the QVL matters a lot, some say it's kinda important, and some say it just doesn't matter at all. What gives? Let's talk about it.

What is the Memory QVL?

The QVL (Qualified Vendors List) is a list provided by a motherboard manufacturer of all the tested and supported memory module brands/models that is guaranteed to work on a certain motherboard. In other words, it's simply an official RAM compatibility list, and you can find the QVL on the manufacturer's website (sometimes as a downloadable PDF file). Some manufacturer's (MSI comes to mind) also provide a QVL for other devices like SSD support, but here we'll focus on the memory QVL. Though...is it?

Is the QVL Important?

In other words, should you stick to only buying RAM modules that are listed on the memory QVL? Or is it fine if you end up going with RAM that isn't on the list?

To summarize the rest of the article, whether or not the memory QVL is important or not ultimately comes down to personal opinion. The general consensus among most experienced builders and hardware enthusiasts on this grey-area of a topic is that it's not necessary to worry about the QVL for consumer gaming/workstation PC builds, and that it's only crucially important to stick to when building high-end servers and other professional-grade systems of that nature.

A lot of hardware enthusiasts will say it just doesn't matter and they've never encountered a problem using RAM that's not on the QVL, and therefore there's no need to concern yourself with ever worrying about the QVL.

Others will say you ideally should indeed stick to only choosing memory that's on the QVL, especially if you want to be extra cautious and ensure compatibility. Then there's those who were unlucky and actually did encounter a problem by not sticking to the memory QVL, and who now swear by it.

Unfortunately, after having researched this topic thoroughly to gather the opinions of a wide array of different opinions (and not just rely on my own limited experience; personally I never considered the QVL for my own builds), I can't conclusively say that you either should or shouldn't worry about the QVL.

The truth is though, for most builders who are building a consumer gaming or workstation desktop, the memory QVL is just not important and in the far majority of cases you will be just fine ignoring it.

Besides, the published QVL by a manufacturer is just a snapshot of the compatible RAM modules on the market, as they can't and don't test every single model on the market (with new models are continually being released). No QVL is going to include every single type of memory that will work with that motherboard, and manufacturer's might revise RAM compatibility of a particular board through BIOS updates and then not update the QVL.

Have People Encountered Issues Avoiding the QVL Though?

But while the chances are low you'll encounter compatibility issues by ignoring the QVL, there are always exceptions to the rule, and if you do your research you'll indeed find examples of those who got stung by not sticking to the memory QVL. First generation Ryzen processors a couple years or so ago spring to mind, as there were a fair few people having RAM compatibility issues during that period which, do correct me if I'm wrong, would probably have been avoided if they stuck to the QVL.

If you want to be as safe as possible, and especially if you're going with AMD Ryzen (even more recent versions) which over recent times tend to be more picky with RAM compatibility compared to Intel, doing the extra upfront research of checking the memory QVL for your chosen motherboard won't hurt. Not necessary as I said, and you'll likely be okay without doing so, but you just never know. Remember, if using PCPartPicker to check compatibility of your new PC build, they don't check the QVL so it's always something you need to do manually by going to the manufacturer's website.

Speaking of PCPartPicker, here's what they themselves said about sticking to the QVL which also mentions that using memory NOT on the QVL may possibly void your warranty with Asus motherboards:

"The list on Gigabyte isn't the full compatible list. It's the QVL - Qualified Vendors List. That's what they've tested and can guarantee works. Everything else has to meet common specifications (which does the vast majority of the time because it's a shared spec). Needless to say Gigabyte can't possibly test with every RAM module on the market, nor can they continue testing as new modules are released by the week. So the QVL is a snapshot of what they tested and approved at the time the QVL was published.

If you're building large scale server farms with high end server motherboards, it can be worth the restrictions to stick to the QVL. But in the desktop/PC world it's almost never necessary to restrict yourself in such a way. That's why we allow for compatibility if the RAM says it is a certain spec and the motherboard says it supports that spec. The only manufacturer I've heard of to date that denies support requests because RAM isn't on the QVL is Asus. I'm not sure if that's an Asus-wide thing, or just select people handling the support calls not wanting to spend the time on it."