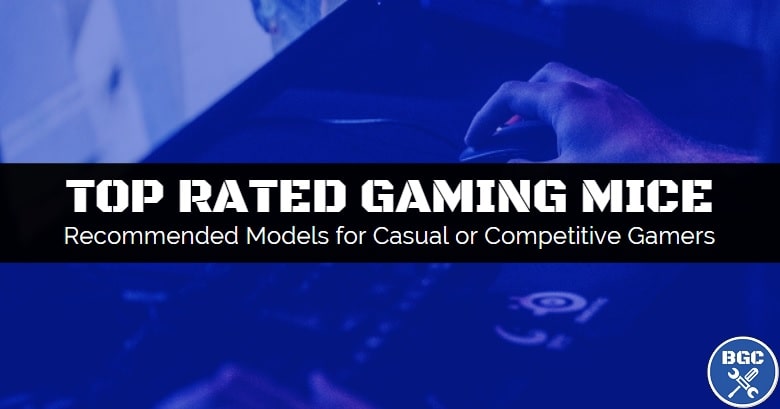 Your trusty mouse can be an important piece of the PC gaming puzzle, and especially so if playing certain competitive eSport genres like FPS and Battle Royale as you don't want a bad mouse holding you back from playing at your best. But what makes the best mouse for PC gaming? It's a great question, and selecting the right PC pet is no easy task with the plethora of different brands, models and specs out there.

But some computer mice do stand out from the crowd in terms of overall value for money and bang for buck in certain gaming categories. To help simplify your selection we've tracked down and compiled what we believe to be the very best gaming mice for the money right now after closely studying and analyzing different individual price tiers along with what most of the world's top pro gamers currently use as their weapon of choice.

We've broken down our gaming mouse recommendations into 5 categories based on what type of PC gamer you are:

While wireless gaming mice can be good for gaming (see below) if you're willing to spend enough money on one with a flawless wireless sensor, for most gamers, and especially those wanting to be cost-effective, buying a good wired mouse for gaming is the best way to go. Besides, most well-known pro gamers still use wired gaming mice, and that likely won't change for a while to come when flawless wireless sensors will come to budget gaming mice too.

As for how much to spend on a good gaming mice, if you're not trying to be the next eSports pro superstar, don't let anyone tell you a cheap mouse won't be good enough for casual gaming as you can indeed find a very capable and comfortable wired gaming mouse for under 50 bucks or even less. Case in point is the versatile Logitech G300s, a standout among budget gaming mice and is more than enough to keep many gamers happy (for any genre, and for right OR left handed players).

If you want to go even cheaper with a dirt-cheap basic office mouse to just get the job done, something like the Microsoft Basic Optical Mouse may be okay if you don't expect much from your new pet. On the other hand, if you want to step things up a notch from the Logitech G300s, the notoriously-good Razer Deathadder Elite is another excellent pick that's stood the test of time as great value for any genre.

For more serious gamers wanting the very best quality and features that a wired mouse can provide, the Logitech G502 Hero is great for larger hands and/or palm grips, and the Razer Viper Ultralight is an excellent eSports-grade mouse for smaller hands using either a claw or fingertip grip. Also keep in mind that any of the more specific gaming mice we recommend for other genres can work just fine as a general all-purpose gamer, such as the uber-popular Zowie mice used religiously by CSGO and Overwatch pros. Just because a mouse is great for FPS, doesn't mean you can't use it for any other type of game.

Wireless mouse sensors have come a long way. Until only fairly recently, the sight of a wireless mouse on the desk of any aspiring competitive player was a quick-tell to the more experienced that gamer didn't really know what he was doing and would inevitably be an easy kill. How things have changed though, and a fair handful of pro players now actually use a wireless mouse as their preferred weapon of choice as the latest wireless sensors are quite literally flawless.

Howoever, good wireless gaming mice come at a price premium, and you definitely don't want to be rocking a cheap wireless mouse for competitive play as many wireless models on the market aren't flawless. So if you're on a budget, stick with a wired version, but if you're willing to invest some monies in a top wireless mouse then consider top models used by pros such as the Logitech G Pro Wireless - a current 2019 favorite among many top FPS, Battle Royale, and MOBA players. The Logitech G703 Lightspeed is another wireless mouse we can comfortably recommend for serious gamers. If you're just gaming casually, you can get away with a cheaper wireless model like the Corsair Harpoon or Ironclaw.

When it comes to competitive gaming, and most especially first-person shooters (FPS's) like CS:GO and Overwatch, and Battle Royale games like PUBG, Apex Legends and Fortnite where perfect aim accuracy and every little 1% of an edge can be the difference between winning and losing, your mouse is perhaps the single most important piece of PC equipment of all. To play at your best and maximize your chances of winning cutthroat fast-paced games like this where every millisecond counts, you want to ensure you’re using a mouse that doesn’t let you down in the heat of battle. That means not only choosing a high-quality, well-designed, proven mouse that the pros use, but picking a model that fits your particular hand orientation and size.

For FPS games specifically, where your selection of mouse plays the biggest role in any gaming genre bar none, Zowie mice sweeps the floor when it comes to the most widely used brand by pro Counter Strike and Overwatch players. Do a little digging around into which gaming mice are best for CSGO or Overwatch and you'll quickly find that Zowie are the way to go without a shadow of a doubt. Zowie mice give unprecedented precision and control for First Person shooters, and the great news is they have different models for your exact hand orientation and size. For example, if you're right-handed with medium to large sized hands, the BenQ Zowie EC1-A is the best FPS mouse can you get your big mitts on: (see all recommended styles in our main table above)

If you want a wireless gaming mouse for FPS or Battle Royale gaming, I'd get the Logitech G Pro Wireless which is what a lot of pros actually use. In the past a wireless mouse was the sign of ultimate noobery, but not anymore with Logitech latest wireless mice sensors included in models like the G Pro. The G703 is another excellent wireless gaming mouse we can highly recommend that's also used by lots pro gamers too, and is better suited for those with larger hands and/or who like to use a palm grip (though a claw grip is just fine for the G703 too if you have large hands).

As for the FinalMouse Ultralight 2 and Air58, these are the pinnacle of wired gaming mice for eSport pros for anyone wanting the absolute lightest mice on the market that's been specifically designed for maximum precision and control for FPS and/or Battle Royale. But it comes at a price premium and the fact it's super-hard to find one for sale at a respectable price (let alone in stock), as people mark-up the prices heavily over normal retail prices due to the high demand and short supply. Avoid paying too much if you do find one for sale and you want the lightest mouse on the market that some Fortnite pros like Ninja use, but avoid sellers trying to get $150 or more out of you unless you really, really want one.

For MOBA titles like DOTA2 and League of Legends (and RTS games like Warcraft 3), the mouse you choose isn't as important when compared to First-Person Shooter, but you still want a good mouse with great accuracy, control and comfort for your particular hand type. For MOBA you also don't need a crazy amount of buttons like with MMO games (see below) as you'll want keyboard bindings instead, and a mouse with 2-6 customizable side buttons is more than enough for most players.

Any good gaming mouse will do for these games, including any good FPS mouse, but if you want our top specific picks for someone who just plays MOBA games then I'd either get the Razer Deathadder Elite if on a budget, or the Razer Naga if you want a few more side buttons; keyboard bindings are most important for DOTA/LoL but some players still want 6-7 side mouse buttons too. If you want a wireless mouse for competitive MOBA, once again like mentioned above in our thoughts on FPS mice, I'd get the Logitech G Pro Wireless for its flawless sensor.

For MMO games (short for MMORPG: Massively Multiplayer Online Role Playing Game) like World of Warcraft, Star Wars The Old Republic, Final Fantasy XIV and Guild Wars 2 to name a few popular modern ones, the ideal mouse is one with plenty of programmable/macro buttons on its side to have all your frequent skills and items effortlessly at your fingertips. Same goes with RTS games, where the extra customizable side buttons helps in the heat of battle. As for wireless gaming mice for MMO games, unlike MOBA or FPS games where every single millisecond counts in competitive play, for slower-paced MMO games you can get away with using any wireless mouse (see our top recommended wireless gaming mice above).

Answer: There are many specs to consider, but the best gaming mice all have the folllowing: a flawless (wired or wireless) sensor to eliminate the possibility of input lag, great comfort, pinpoint accuracy, and the right features for your specific genre (such as enough customizable side buttons for MMOs).

Answer: They can be, however unless you have the budget to buy a high-end wireless gaming mouse that has top-notch reliability, you're better off getting a wired mouse for gaming as it eliminates the possibility of input lag and interference.

Question: What Mice Do Pro Gamers Use?

Answer: Our top recommended gaming mice above were picked based on what many of the top pro gamers in the world use for different genres, and we found the far majority of FPS pros use Zowie mice while it's a more even split between Logitech, Razer, Zowie, Corsair and FinalMouse for other genres like MOBA and Battle Royale.

Answer: It's a good question, as many products marketed as "gaming" models can bring a lot of over-the-top hype (not to mention price tags) without much actual real-world benefits, but when buying a gaming mouse it's different as there can be clear benefits to using a high-quality gaming-specific mouse in fast-paced competitive gaming where pinpoint accuracy, control and every little millisecond can make a difference.