How to Install Optical Drives in a PC Case

5 Steps to Upgrading/Installing an Internal CD, DVD, or Blu-Ray Reader/Writer 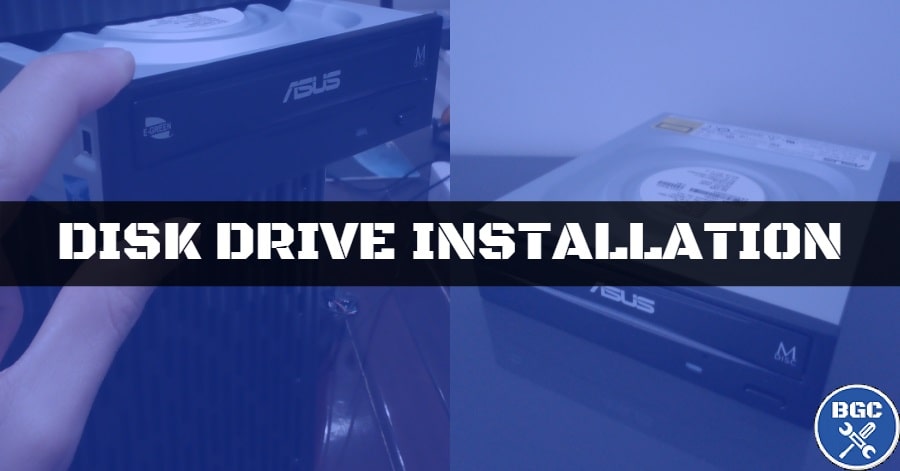 Optical drives can refer to either CD, DVD, or Blu-ray drives and burners. They're not 100% necessary in a modern computer these days, as not everyone has a need to play or burn physical media since almost everything is digitally available.

But if you do have an optical drive to install in your PC, you'll be done in no time as they are one of the easiest, quickest PC components to install. All that's involved is mounting the drive into a 5.25 inch drive bay in the front of your case, securing it with screws, attaching a SATA data cable to the motherboard, and then connecting a SATA power cable to the power supply.

To install or upgrade to an optical drive, you'll need the following:

If you have all that, let's dive into the full steps to install an optical drive in your PC case and connect it to your motherboard and power supply.

See Also: How to Build a PC (Full Guide)

Some cases will have multiple 5.25" drive bays, so first decide which one you want to use to install your optical drive.

The drive bays in a case have covers on them to protect your PC from dust, so before installing a optical drive you need to remove the cover on the drive bay you want to use.

In most cases the cover can simply be removed by pushing it out with your fingers from either the inside or outside of the case, but some cases have the covers screwed into place (in which case you'll need to unscrew them first in order to remove them).

Leave the covers in place for any of your unused drive bays. 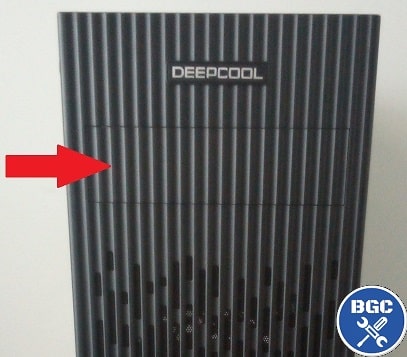 If you need more help with pulling off the front panel, refer to How to Install Extra Case Fans in a PC as we explain it in more detail there. Also, if you haven't already removed the side panels of the case, remove those you'll need to reach inside the computer to screw in the optical drive (from both sides).

If you're upgrading an existing PC with an optical drive, before opening up your case don't forget to turn off your PC, turn off the switch on the back of the computer, and remove the power plug from the wall to be safe. 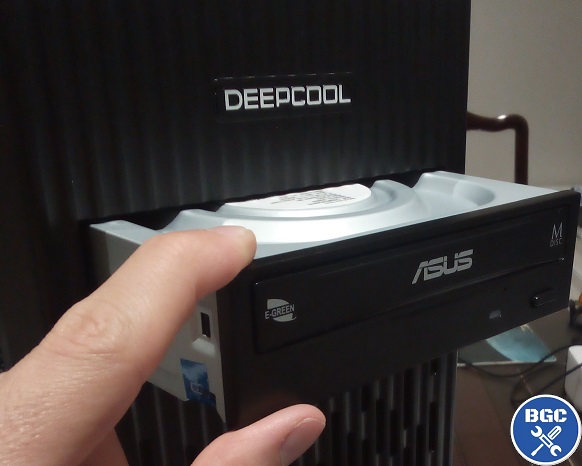 Carefully push the optical drive into place from the outside

You want to slide the optical drive all the way in until the front of the drive sits flush with the case (in other words, sits at the same level). However, keep in mind that depending on your case and the specific optical drive you're installing, the front bezel/faceplate of the optical drive might stick out a little as is the case (pun intended) with our DeepCool Matrexx 30 Mini Tower and Asus DVD-RW: 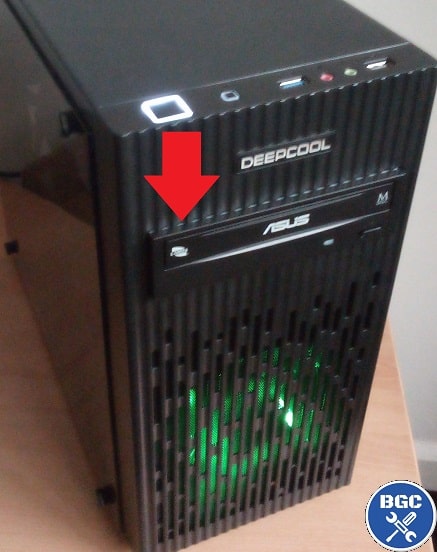 If you look closely, the front bezel/faceplate sticks out ever so slightly - don't worry as this is normal with some drives and cases


3. Line Up Holes and Screw Optical Drive in Place 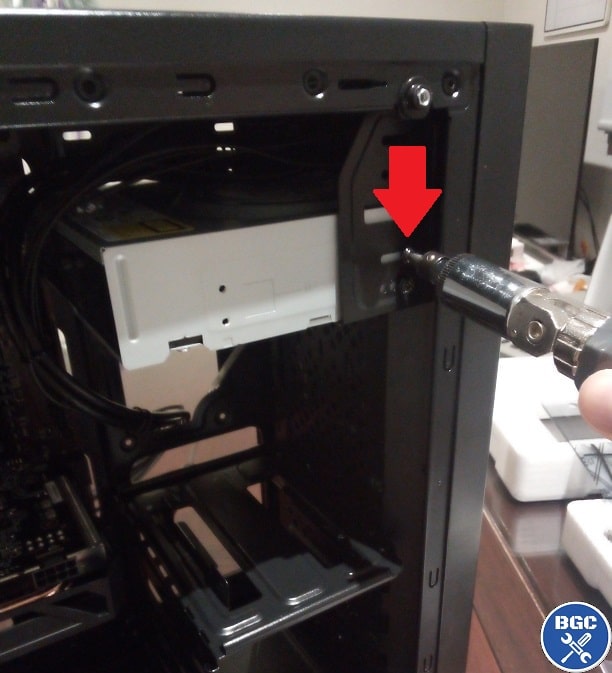 Once your CD/DVD/Blu-ray drive is securely installed in your computer case, you need to connect 2 cables. The first of which is the SATA data cable which plugs into the back of the optical drive and into a SATA port on the motherboard.

If you bought an OEM (Original Equipment Manufacturer) optical drive which only came with the bare drive and nothing else, you will need to use a SATA data cable provided by your motherboard (most boards come with at least 2). Otherwise, you'll need to buy one.

Also, when plugging the SATA data cable from the optical drive to the motherboard, try to thread it through a cable management hole on the back of the case somewhere if you can to keep things neat. Having loose cables hanging around in the case isn't ideal, and something to avoid if at all possible. 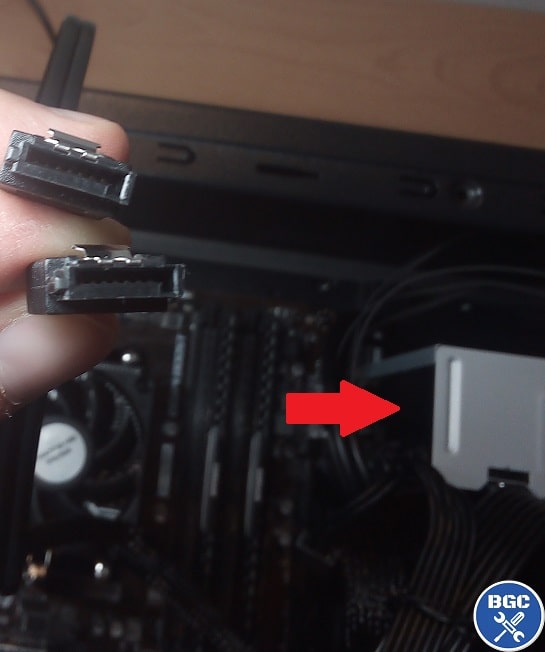 These is a SATA data cable which plugs into the back of the optical drive, as well as into a SATA port on the motherboard

Note: For anyone wondering, if you have a motherboard that has a mix of both SATA2 and SATA3 ports, most optical drives don't take advantage of SATA3 so it doesn't matter if you plug it into a SATA2 port.

Now all that's left is to take one of the SATA power cables from the power supply and connect it into the back of the optical drive.

If you're building a new PC from scratch and haven't reached the section on installing the power supply, then you can just do this later on once you've installed the power supply in the case (but don't forget otherwise your optical drive won't work).

When you eventually load up your PC, the system will automatically recognize your optical drive and there's nothing else you need to do as optical drives don't require you to install drivers.

Some optical drives will come with a CD or DVD containing software, but installing this isn't necessary unless you want to use said software. That's all there is to installing an optical drive in your PC.

See How to Assemble a PC from Scratch for all other component installation steps (also explained in an easy to understand way, with plenty of helpful photos and diagrams) 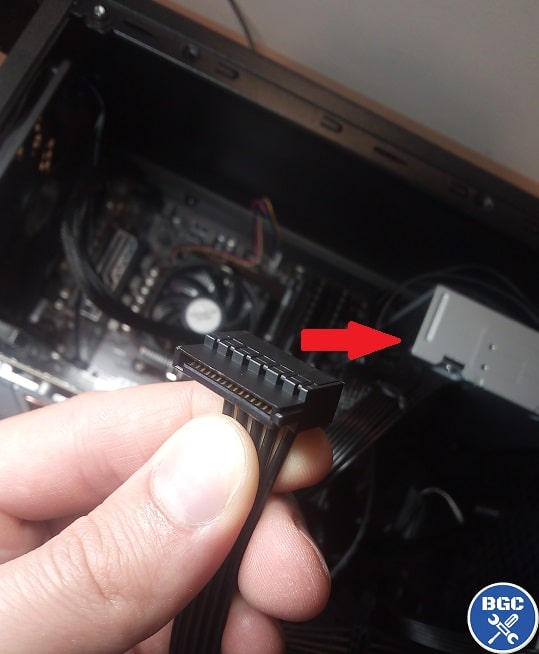 Indie programmer currently working on my first official game release (after years of hobby projects), an atmospheric story-driven VR FPS/adventure built with Unreal Engine to be announced once I'm ready here and here (for anyone into VR FPS's). Also likes writing about tech, which helps to fund development of the game. My favs of all time are OOT, Perfect Dark, MGS1, MGS2, GE007, DKC2, THPS3, HL1, WC3, Vice City, and KOTOR, with the most recent addition to my list of immortals being the VR masterpiece Alyx.

If you want help with a new build or upgrade feel free to ask on the main PC builds guide. I try to respond to every comment. If you found the site extra helpful and want to support the content here, all I ask is consider sharing an article with anyone you think might also benefit from it (I'm also never going to say no to coffee should you want to directly support the site). - Julz