How to Install a CPU Cooler (Step by Step) 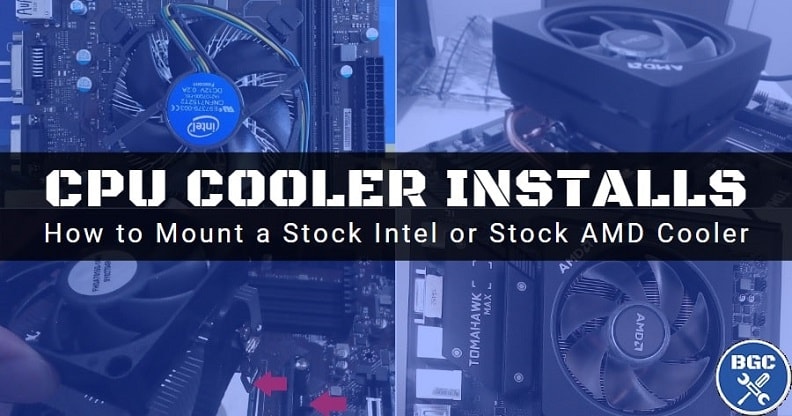 If you're following along with our complete computer assembly tutorial for beginners, you've now installed the CPU onto the motherboard and it's time to learn how to install a CPU cooler onto your processor. There are 4 different types of CPU coolers you could be installing for your PC:

In this CPU cooler installation guide we'll be explaining how to install an Intel or AMD stock CPU cooler, but if you're installing an third-party air or liquid cooler this tutorial may still be helpful when paired with what's included in your particular cooler's manual as the overall process and concepts are similar (though each third-party cooler has slightly different install processes).

If referring to your CPU cooler's instruction manual isn't enough, check for a more detailed walkthrough guide online through Google or YouTube, and don't forget we have a detailed guide to installing the Cooler Master Hyper 212 if you're rocking that one like many people do (it's one of the most popular CPU coolers ever). We also have an installation guide for the NH-D15 if you're after the absolute best high-end CPU cooler on the market today for powerful processors.

Thermal paste, also called thermal grease or thermal compound, is a substance used between the CPU and the CPU cooler to eliminate air gaps and to maximize heat transfer between the CPU and cooler. AMD and Intel stock coolers, along with some aftermarket coolers, already come with thermal paste already pre-applied to the underside of the cooler as pictured below. Therefore, there's no need to buy and apply your own paste unless you want to. As you see below with our stock Intel CPU cooler, the grey strips in the middle of the underside of the cooler is the pre-applied paste:

If you're installing a third-party/aftermarket CPU cooler, some do come with pre-applied paste already, but not always so you should check. If there is no paste, the cooler should have come with some already that you can apply yourself. Or, buy some paste yourself - the Arctic 5 or MX-4 pastes are great and have cult-like status in the DIY community; see our guide to the best PC building tools for more on choosing a paste.

Top-quality pastes like these may work slightly better than paste that comes with a cooler, but it's not going to make a huge difference so most people will be fine just using the paste that comes with their cooler (if it does in fact come with some). To learn how to install thermal paste see our Hyper 212 RGB Black install guide which explains it in detail.

Fitting a stock cooler is very simple, but again, if you're installing a third-party cooler the process may be a little more involved so you'll want to refer to your specific cooler's manual.

Locate Where the Fan Cable Will Go in Advance

Before fitting an Intel or AMD CPU cooler onto your CPU, you'll first want to check where the power connector for your cooler is located on your particular motherboard, so that you can orient/position the cooler in a way that the cable can comfortably reach that connection (or so you can plan in advance how to best tuck away or neaten the fan cable if you want to avoid loose wires hanging over your motherboard - not necessary but something to think about).

Why plan ahead where the CPU cooler's fan cable will go? You want to avoid installing the cooler onto the CPU, only to realize you want to orient it another way around and have to re-install it. If you did that, you run the risk of messing up how the thermal paste sits, meaning that you might have to remove and re-apply the paste. So, try and install the cooler the ideal way around the first time.

Don't overthink this though, as with AMD stock coolers there's only 2 ways you can orient the cooler as there are 2 clips on the side that need to attach to 2 clips on the motherboard bracket as you'll see below (whereas Intel stock coolers can be positioned any way you like as they are mounted using 4 holes in each corner). The cooler fan cable should reach no matter which way around you install the cooler, but it's just something to keep in mind.

Note: For more high-end stock coolers that have RGB lighting effects, like the Wraith Prism cooler that comes with the AMD Ryzen 7 3700X (shown in some of the photos below), there will be 2 cables to plug into the motherboard so keep that mind (the 2nd cable plugs into a USB header on the motherboard; check your motherboard manual to locate this).

Making sure you've grounded yourself beforehand by touching a metal object, pick up your Intel stock cooler by its sides and carefully lower your cooler onto the top of your CPU by lining up the four corners with the four holes on the motherboard: 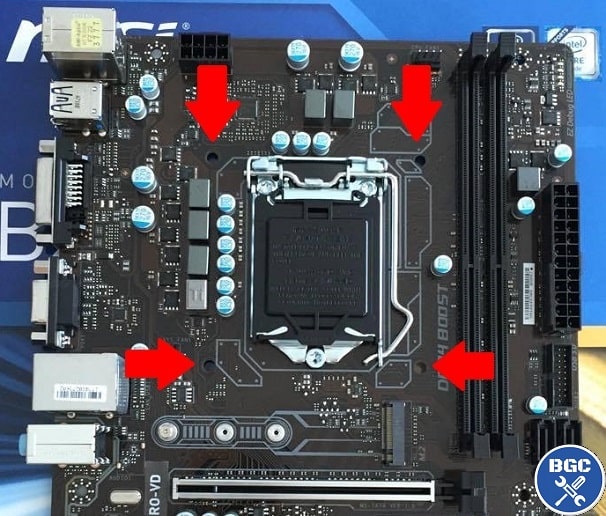 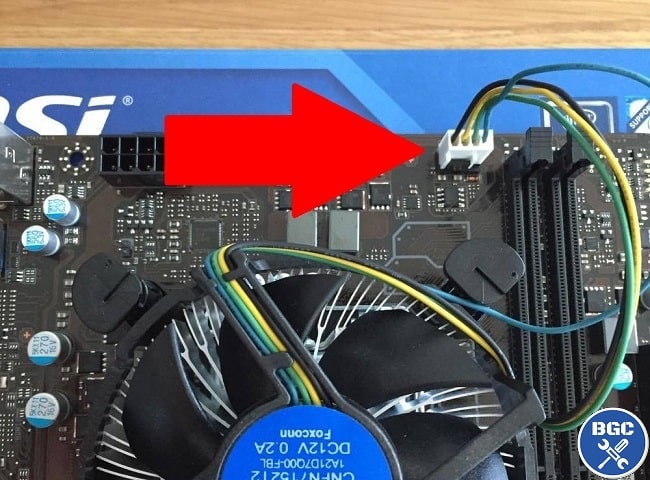 To lock the Intel stock cooler in place, you need to push down on each of the four corners until you hear a clicking sound for each. To check if the Intel stock cooler is properly locked in, carefully lift the motherboard (holding the CPU fan to do this is fine) and check to see whether the four corner of the cooler have all come through on the back of the motherboard. Remember to only touch your motherboard by its edges. Also, try to gently lift the cooler out of its place to see if it's nice and firmly locked in.

It should be tight, and if one of the push pins isn't locked in place properly you won't have an evenly balanced cooler which may lead to undesirable temperatures down the track because the cooler base isn't entirely touching the processor. So take your time to make sure it's installed correctly. If you ever need to remove the stock Intel cooler, you'll need to twist each of the four corners 90 degrees in a counter-clockwise direction before lifting it out.

Mounting an AMD stock cooler is slightly different. On your AMD motherboard, there should be 2 pre-installed brackets on either side of the CPU socket as you can see here in this image of our Tomahawk Max just before installing the Ryzen 7 3700X: 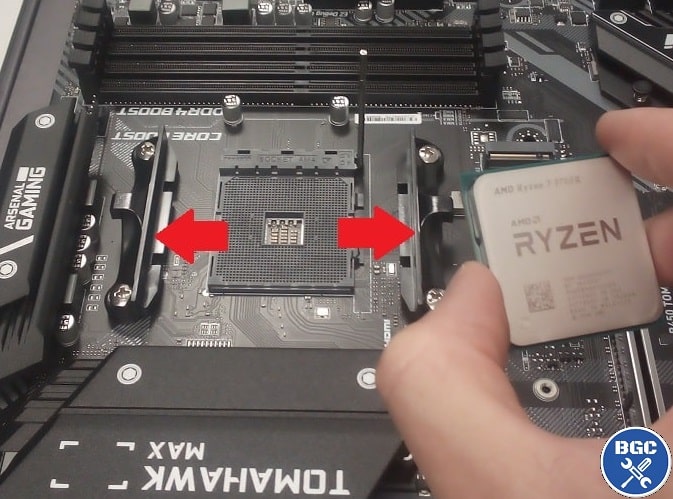 Unlike Intel coolers, AMD coolers attach to 2 brackets on either side of the CPU socket

To mount the stock AMD cooler, lower it directly on top of your AMD CPU so that the two metal clips on the side of the cooler line up with the 2 brackets on the motherboard. Make sure you place the cooler directly in the middle of the CPU. Here's what installing the smaller, more basic stock AMD cooler that comes with budget CPUs like our AMD Athlon 3000G: 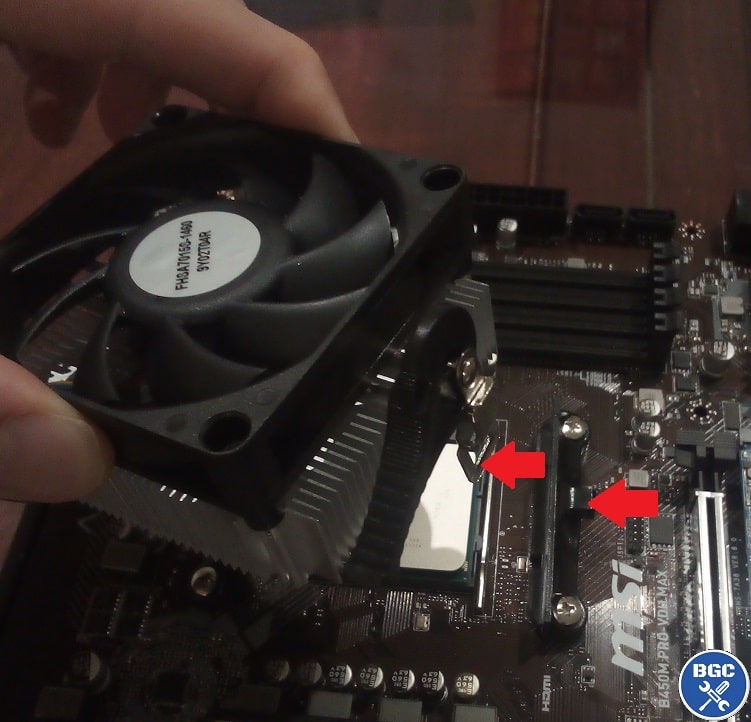 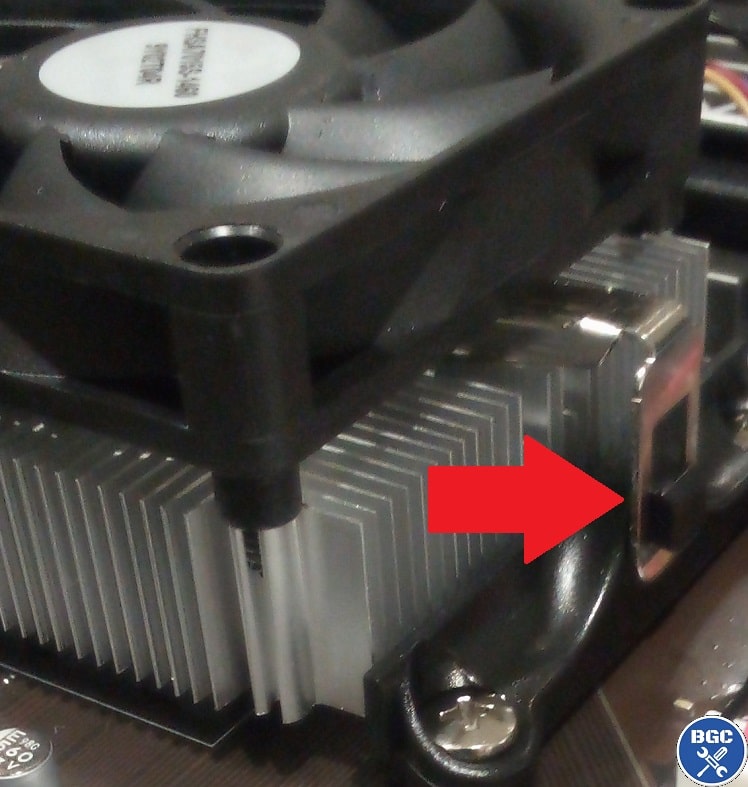 For more high-end AMD stock coolers like our Wrath Prism cooler that came with the Ryzen 7 3700X, it's the same deal and just a matter of locking in the 2 clips on either side: 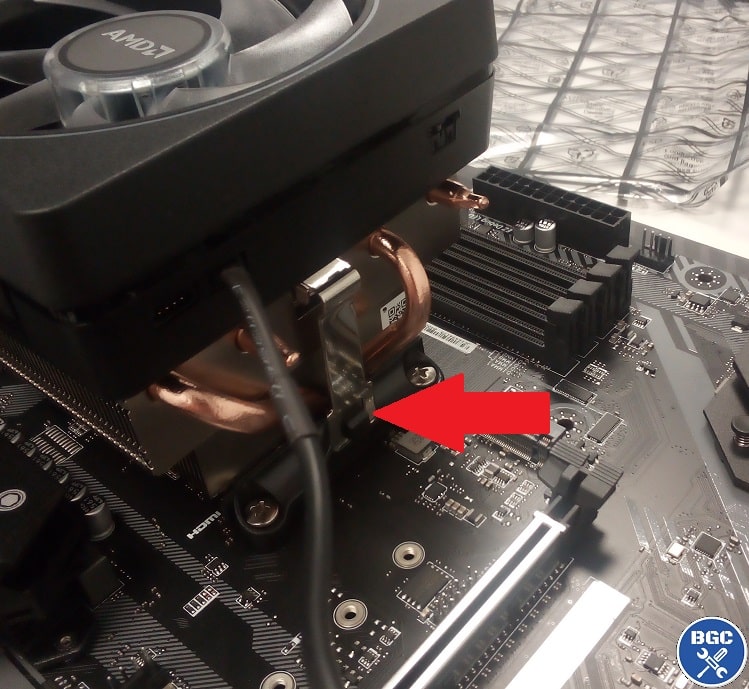 After attaching the clips to the bracket you also have to lock the lever arm found on one of the sides of the cooler by lifting it around 180 degrees: 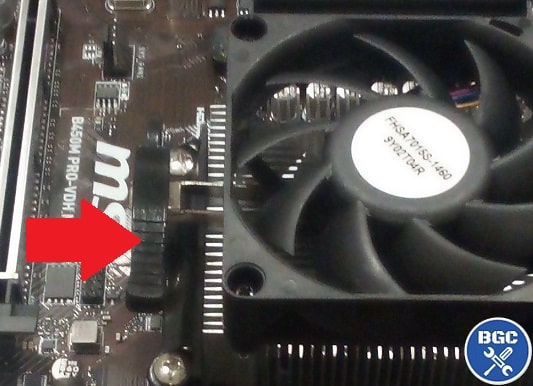 To secure the AMD stock cooler, lock this lever by pulling it around 180 degrees

Now your cooler is in place, don't forget to plug in the fan cable to the matching four pin connector on the motherboard which should be labelled “CPU_FAN” or something similar. Avoid having the fan cable lay across the cooler fan otherwise it could jam the fan one day - keep it away from the fan blades.

If your cooler has a second cable for RGB, like the Wraith Prism, remember to plug that in to a USB header on the motherboard if you want the RGB to work. That's all you need to know to install a CPU cooler for an Intel or AMD processor. Check out the complete guide to building a PC for guidance on installing all your other components.