How to Install a CPU on the Motherboard 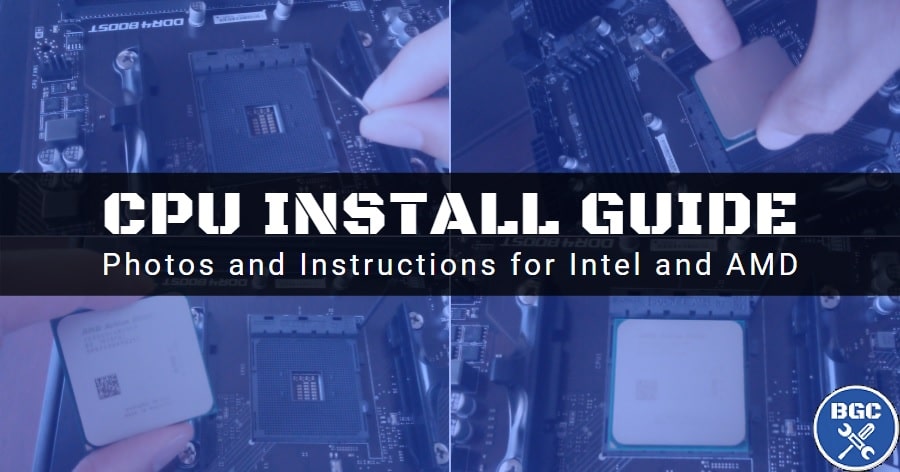 Learning how to install a CPU onto the motherboard is straightforward, but there are couple tips to know before and during CPU installation to ensure a properly-installed and secure processor, and to avoid damaging something. CPUs are fragile so you're going to want to take your time with this part to make sure you do things correctly.

These steps on how to install a processor are part of our main how to assemble a PC tutorial. Refer to that guide if you need to learn the steps before and after installing your CPU (such as getting the motherboard ready).

This CPU install walkthrough explains and shows both how to install an Intel CPU, and how to install an AMD CPU (specifically, using the Intel LGA1151 socket and AMD AM4 socket). The steps are very similar for installing Intel and AMD CPUs, but there are a couple small differences which we'll get to.

Before proceeding with the CPU installation steps below, just keep in mind the following safety precautions:

- Hold a CPU only by its edges/sides (don't touch the bottom or top).

- Keep your CPU in the anti-static safety bag that it came with until the moment you're ready to install it. Don't leave it lying around in the open.


Lastly, before we get straight into the CPU install steps, you'll notice the photos used in this CPU install guide show how to install a CPU onto the motherboard outside the case. But don't worry if you're installing a CPU inside the case (when your motherboard is already inside), as it's the same process.

See Also: How to Choose a CPU (Features Explained)

Yup, we weren't kidding when we said the chief aim of our guides and tutorials is to ensure absolutely no noob ever gets left behind. We keep things as simple as is possible.

So, first go ahead and find the CPU socket on your motherboard. You can't miss it - look for the large square socket somewhere near the middle of your motherboard that has a little metal lever alongside it.

This is where your trusty new CPU will happily reside for the next few years (well, hopefully). Intel and AMD sockets look slightly different, as you'll see below, but they're in the same location. 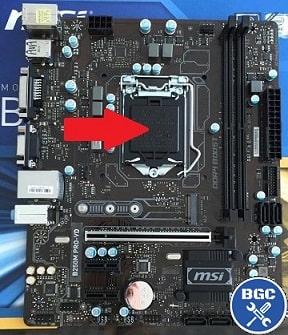 Opening an Intel CPU socket: Pull the retention arm out to the right and then lift it up. Then open the socket cover.

For installing AMD CPUs (AM4 socket) you also have a little retention arm to lift out to the side and then up, but there is no socket cover to open. Instead, when you lift the retention arm up to a 90 degree angle, it automatically opens up the middle of the socket to expose the middle.

Opening an AMD CPU socket: Lift the lever to 90 degrees so that the middle of the socket slightly opens up

Before picking up your CPU, first look closely at the CPU socket and look for the small mark/icon in the bottom left corner. This indicates which way to install your CPU, as there will be an arrow on the CPU itself that goes in this corner: 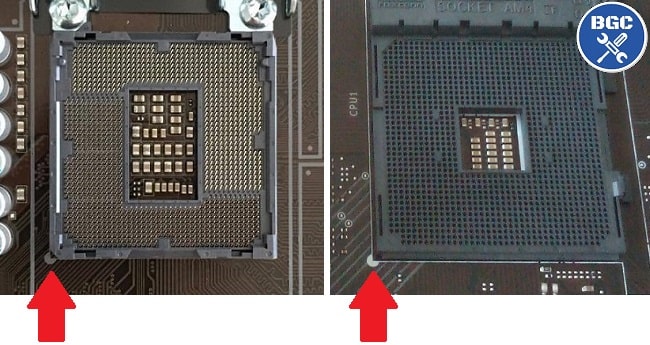 Before grabbing your CPU, ground yourself by touching the metal part of your case or another metal object (if you're not using anti-static equipment like a wrist-strap or mat). It's also worth mentioning again that you shouldn't ever touch the bottom of the CPU. Avoid touching the top of the CPU too, as this is where the thermal paste of your CPU cooler will be so you want the surface as clean as possible).

There's only one correct position to install an Intel or AMD CPU into the socket - by placing it so that the arrow on the CPU matches the mark on the bottom left of the socket (as pictured above). You don't want to accidentally lower in the CPU in the wrong way, as you risk damaging/bending pins, so before lowering it in make sure you're aware of the arrow and which way to install it.

Be very careful not to drop the CPU, and slowly and carefully lower it into the socket as far as you can without letting go. When the CPU is fully lined up with the socket, you can very, very gently let it go and it will naturally fall into place. Do NOT force or push the CPU in - if you have lowered it in the correctly aligned way, it will effortlessly sit into place. To confirm it's fully installed, VERY gently try to nudge it a fraction to left or right. If it wasn't already properly seated, it will gently fall into place when you do this.

Match the arrow on the CPU with the mark on the socket, and very gently lower in the CPU

That's your CPU installation done and dusted! Very simple to do, and hard to screw up if you simply take your time and understanding each step in advance before actually doing it. Now that the brains of your new machine is in place, it's time to keep that little guy cool and quiet by fitting the heatsink and fan (CPU cooler).

Next: How to Install a CPU Cooler 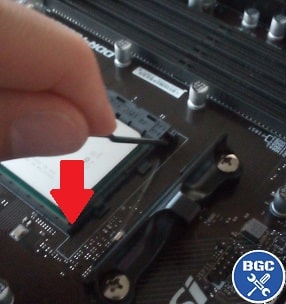 Pull the retention arm back into place