Do You Need to Update Your Motherboard's BIOS for Ryzen 3rd Gen CPUs? How Do You Do It? What About the Widespread MSI B450 Flash BIOS Problems? 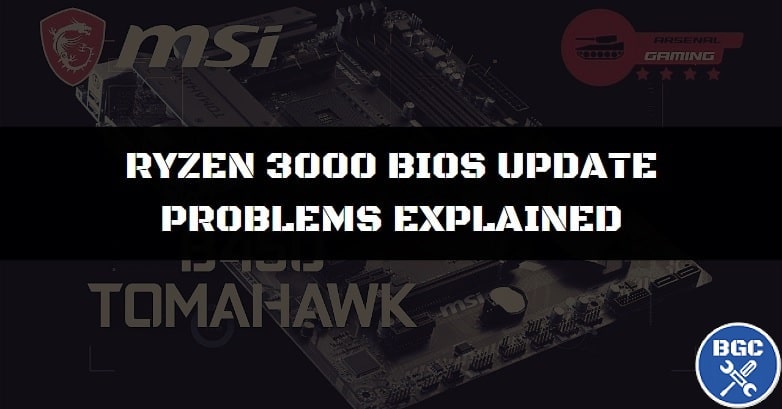 I remember the confusion among beginner builders surrounding motherboard BIOS updates back with the last Ryzen launch. This time around with the new 3rd gen CPUs having just launched, it's no different, with seemingly even more confused builders due to what seems like (from my perspective after looking into this) fairly widespread issues with performing flash BIOS updates on certain popular MSI B450 motherboards like the Tomahawk.

Here's we'll break down what we know about the situation for anyone building a new PC and looking to buy a new budget motherboard (such as a B450) in conjunction with a shiny new 3600/X, 3400G, 3200G, or even 3700X processor from the impressive new 3rd gen lineup, plus how to know if you actually need to update a BIOS for Ryzen 3000 in the first place. If you're still struggling after reading this FAQ, leave a comment below and we'll do our best to help a B450 brother out.

Related: How to Choose the Right Motherboard for Your PC Build

Besides the new X570 boards which are guaranteed to support Ryzen 3rd generation CPUs, when buying any 300/400 series motherboard you'll want to first confirm that the model you're thinking of buying (or already have) has a BIOS update released for it. Most models should by now, but if you have a rarer model you never know. See the official manufacturer lists of Ryzen 3000 supported motherboards here:

Let's begin at ground zero if you're not sure whether or not a motherboard will actually need its BIOS updated for the new Ryzen 3rd gen processors.

You're good to go without needing to upgrade the BIOS, as all X570 motherboards support Ryzen 3rd-gen out the box. X570 is the brand new chipset though, and is significantly more costly than your other options, though worth considering if you just want to guarantee compatibility without having to worry about the BIOS (though only recommended higher-end Ryzen 3600 or 3700X builds, as for a budget rig it can't be justified).

You will need to update the BIOS if buying any 300 or 400 series motherboard (B350, B450, X370 and X470 chipsets) for it to be compatible with the new Ryzen 3000 CPUs. If you get lucky, you could receive a revised board with a BIOS that's already been updated for Ryzen 3000, however at the time of writing this in early August 2019 this is unlikely as the odds are you'll receive stock that was made before the Ryzen 3000 BIOS updates were released.

To know if a motherboard has been updated already, look for a "Ryzen 3000 ready" type sticker on the box. Though this is only practical if buying in-store where you can actually see the box before buying, as when you buy online you won't be able to confirm the sticker unless you have some way of contacting the seller beforehand (perhaps worth a shot if buying from a smaller company, however good luck getting a response from a big online store). In time though, new stock will come through with the update already done, but that could take months.

You will need to update the BIOS.

So, while the new Ryzen 3000 series CPUs are indeed backwards compatible with older motherboards thanks to the flexible AM4 socket, if you're building a new computer for the awesome new Ryzen processors like many people at this time (having eagerly awaited this groundbreaking launch for a long time) chances are you will indeed need to update the BIOS for compatibility with your shiny new chip.

That's unless you're fortunate enough to be splurging on a fancy new X570 chipset, though we can only comfortably recommend that for if you have the cash to splash on a high-end $1000 gaming PC build or higher. For most people looking to be cost-effective, X570 isn't good value for money, especially for the mainstream Ryzen 5 3600 which is without question going to be the most popular choice among builders.

But here's where it gets interesting (AKA a potential hassle for some).

To update your new motherboard's BIOS, you're either going to need an old AMD CPU on you to be able to do the update (explained in the next section), or you can update the BIOS without needing to use an old CPU if your model has a feature to allow you to update the BIOS without needing an old CPU (called a Flash BIOS button on MSI boards). This is a button on the motherboard where you can simply use a USB drive to update the BIOS, and comes mostly on MSI boards but a few ASUS ones too; see this list of B350/B450/X470 boards with flashback.

Sounds good, right? Usually, it is all fine and dandy, but here's the problem. There are widespread reports in various places online from people having issues updating MSI boards using the flash feature. This isn't just one or two random people who don't follow the instructions properly, or who get unlucky, who then leave a negative review. From my perspective after looking into this, my opinion is that's it's a fairly widespread problem (for certain MSI boards). The issue seems to be that 300 and 400 series boards don't have the space to accommodate the new BIOS.

Here's how a couple other sites have explained the issues, which is related to the existing motherboards not having the space needed for the new BIOS:

But there are reports of many people having done the flash update successfully without issues, so it seems a hit or miss thing - you could get lucky, but there's a fair chance (from my perspective) you encounter issues. See here, here and here for more discussion on this from the lovely land of Reddit, but if you look around you'll find even further discussions in other places on the BIOS problems.

Therefore, at this stage, and at least at the time of writing this, my opinion on the matter is as follows: I would personally suggest avoiding buying a MSI B450 motherboard with the intention of using the Flashback update (especially the ones with the most reported issues such as the B450 Tomahawk) for a new Ryzen 3000 CPU. At least for the time being until we can confirm more about this. If you're new to all this and wondering, this does NOT apply to 1st and 2nd gen Ryzen CPUs, so if you're using an 2600, 2600X, 2200G, 2400G, or 2700X then this article is not for you as don't need to update the BIOS.

To fix the issue, MSI have rushed out refreshed "Max" versions of their B450 motherboards which will come with guaranteed support for Ryzen 3000 (ie an already updated BIOS). They're already out in certain regions, but not in the USA as yet at the time of writing, and there's no official word on when (fingers crossed soon). However it must also be said that just because these new Max boards will come with the new BIOS, doesn't mean you should buy them without reading reviews and confirming they're good to go. But they do guarantee you won't have to update the BIOS for a Ryzen 3rd gen CPU.

As for when other motherboards will come shipped with already built-in 3000 support, we could be waiting a while as sellers need to finish selling off the old stock first (AFAIK). So even if someone in an Amazon review says they received a 3000-ready board, there's no chance that you''ll get the same stock (or luck).

All of the above assumes you were considering a board with a BIOS flash feature (where you can update the BIOS without a CPU), but there are plenty of boards that don't have this handy (well, handy when it works) feature. In which case you'll need to update the motherboard with the use of an old CPU.

But here lies another potential problem for many builders: if you're building your first PC, chances are you don't have an old AMD CPU just conveniently laying around. Good news is you have a few different options to get the BIOS update done should you not mind the extra hassle, wait and/or cost:

A video is worth a slab of text for software how-to, so check out the below step by step tutorial on how to update your existing motherboard's BIOS to be Ryzen 3000 ready if you want to do it yourself (instead of bringing it into a repair shop). We won't explain how to update the bios using USB flash on MSI boards, as we don't recommend doing that due to the issues mentioned above, but if you still want to give it a shot despite the risks then Google is your friend to learn how. Anyway, here's how to update your AMD BIOS if you already have an old CPU installed (or if you borrow/buy one to do the update):

If building a new PC with a new Ryzen 3rd gen CPU, I'd suggest either a good-value X570 model if you can afford it and want guaranteed compatibility without needing to update the BIOS (not recommended for cost-effective builders though), consider waiting for refreshed B450/X470 motherboards that will support these new CPUs out of the box, or to buy an existing/old B450/X470 that isn't one from MSI with the BIOS flash feature if you can bring it into a local store for them to update for you.

See Also: The Best B450 Motherboards