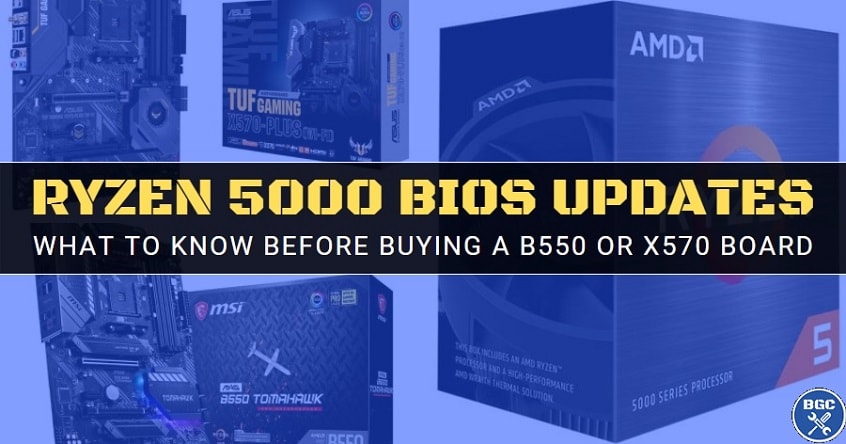 Confused about whether you need a BIOS update or not? This guide will clear the air

The impressive new Ryzen 5000 series is almost as in-demand as the latest NVidia and AMD GPUs, and the premier processor series of choice right now if wanting to build the fastest gaming PC money can buy, having just edged out Intel as overall gaming performance king (well, for now at least). But whenever a new Ryzen series hits the scene, like clockwork we see BIOS/firmware (same thing) questions from confused first/second time builders pouring in left, right, and center across DIY communities online.

Related: How to Update Your BIOS Without a CPU (Tutorial)

But for good reason, as BIOS updates can be a confusing topic, especially if planning your first PC build (but you'll soon find there's nothing too complex about them). This FAQ guide is here to clear up some of the more common questions you may have surrounding BIOS updates for the latest Ryzen 5000 CPUs (5600X, 5800X, 5900X, and 5950X) when buying a new 500 series motherboard (B550 or X570), so let's get straight to it.

Firstly, before explaining what to know about Ryzen 5000 BIOS updates for those building a new system from scratch (where most people have questions surrounding BIOS updates), if you already have an existing system with a B550 or X570 motherboard and you want to upgrade to a Ryzen 5000 CPU, whether or not you need to first update your motherboard's BIOS will depend on how recently you bought your motherboard and whether you updated the BIOS since).

In other words, which specific BIOS version your board was shipped with. To be able to boot up with a Ryzen 5000 processor, you need a BIOS version that is at least AGESA 1.0.8.0 (or newer), but ideally you want one that is AGESA 1.1.0.0 (or newer) for full functionality and/or stability.

So, for current B550/X570 owners, go into your BIOS and check the BIOS version which should be stated on the main screen (or check your motherboard manual if you can't find it). If you need to update it, do so within the BIOS itself following the manufacturer's instructions which you should be able to easily find online (but avoid using the BIOS flashback button if your motherboard has that feature, as that is only recommended if you can't boot with a brand new PC build).

Note: Even if you don't need to update your motherboard's BIOS for Ryzen 5000 to boot (ie your BIOS is AGESA 1.0.8.0), if your BIOS isn't AGESA 1.1.0.0 then you should update to that version since AMD themselves has recommended it to "make sure your AMD Ryzen 5000 Series processor has full performance and the best experience".

Now to the question most have in relation to BIOS updates right now. If you're building a new PC from scratch with a B550 or X570 motherboard, yes, you may need to first update the BIOS before being able to install and boot/post your new system with a Ryzen 5000 CPU. You'll see PCPartPicker (a handy PC planning tool) indicate this to you if using them to plan a build, and some retailers will also mention it on their motherboard listings (ie Newegg).

However, the key words here are "may need" - as I write this at the start of 2021, generally speaking the chances are quite good that many (perhaps even most) B550 and X570 motherboards bought from large hardware retailers like Amazon or Newegg (ie ones that move stock at high rates) will actually already have had their firmware (ie BIOS) updated by the manufacturer to a recent-enough version that supports Ryzen 5000 out the box (ie AGESA 1.0.8.0 or newer).

So to summarize, while it is entirely possible that a new B550 or X570 purchased right now won't have been updated for Ryzen 5000, at this point in time it's becoming increasingly unlikely that you will need to update a newly purchased B550/X570 BIOS and Ryzen 5000 should work out the box.

Despite your chances being good by now since Ryzen 5000 has been out for a while while now (and so motherboard stock has had plenty of time to have been updated), there still absolutely IS a fair chance a new B550 or X570 comes with an older BIOS that needs to be updated prior to booting up with Ryzen 5000 (even if buying from big stores). So if buying a motherboard online, you can't just assume it will come Ryzen 5000 ready and you should prepare for that to be the case.

This is important to understand if building a new Ryzen 5000 build, because some motherboards will require you to have an old CPU installed in order to be able to update the BIOS, and not everyone building a new PC will have a spare older AMD CPU lying around to use (especially if building your first PC). So what should you do? If buying a board online, to be prepared for the (small but possible) chance of you needing to update the BIOS to be able to boot with your Ryzen 5000 CPU, I recommend sticking to B550 and X570 motherboards that have BIOS flashback.

BIOS flashback is a handy feature that allows you to update the BIOS without needing a CPU installed (all you need is access to another desktop/laptop and a USB drive), but keep in mind this feature is named slightly differently based on the manufacturer (eg on Gigabyte motherboards it's called Q-Flash Plus). See those two articles I just linked for full details as they explain absolutely everything you need to know.

As we move further into 2021, having BIOS flashback will become less and less important as the chances of getting a B550/X570 with an older BIOS version becomes near zero. Sure, the chances are probably quite slim right this second too (hard to gauge so that's as accurate as I can be in my wording), but it definitely can and does still happen, and if you receive a board that's not been updated AND you buy a board that doesn't have BIOS flashback, you will need to update the BIOS using one of the following methods:

Related: B550 vs X570 Differences Decoded

If you already bought a 500 series motherboard, or are looking at buying one at a local brick and mortar store (those still exist?), to know if it has a BIOS version recent enough to be able to boot up with a Ryzen 5000 processor, look for a sticker or printed logo on the front of the motherboard box that says something along the lines of "Ryzen 5000 Ready" or "4th Gen AMD Ryzen Desktop Ready" (remember that Ryzen 5000 is 4th generation Ryzen since AMD skipped from Ryzen 3000 to 5000; yup, tech naming will forever remain strange).

But if buying online, there's no surefire way to know which BIOS version it will be shipped with unless either states on the product listing in clear terms, or if you're able to somehow contact the seller beforehand to confirm, though with most large online retailers that isn't possible. I tried asking once - for science - and only got generic responses telling me they can't guarantee whether a certain board sent out to me will have a Ryzen 5000 ready sticker or not. You could look at recent reviews of that motherboard to perhaps get an idea if people are receiving Ryzen 5000 ready boards, but you can't just assume that you will get the same exact stock as the person who wrote the review.

Related: How to Choose the Best Motherboard

Does AMD Give Out Free CPU Boot Kits for Ryzen 5000?

If your motherboard does NOT have BIOS flashback (and therefore cannot have its BIOS updated without a CPU), as mentioned you will need an older Ryzen CPU to be able to update the BIOS.

As they did following the Ryzen 3000 launch, it seems that AMD are indeed also offering the same service they did for Ryzen 3000 purchases; as mentioned here by AMD, you'll need to show proof of purchase of both a Ryzen 5000 CPU and 500 series motherboard, and after verifying your situation they'll send out a temporary CPU and cooler for you to install on your motherboard so that you can boot-up (and update the BIOS). You then uninstall the CPU and cooler, and send it back.

Just keep in mind if you are in the situation where your B550 or X570 needs a BIOS update to be able to boot with Ryzen 5000, and your motherboard doesn't support BIOS flashback (ie can't be updated without an older CPU installed), as mentioned earlier, instead of waiting on AMD's free boot kit you can just pop into a computer store and they'll do the update for you (usually for a small fee).

Hopefully I've pinpointed and eliminated the question you were seeking within this article (or the ones I linked to), but if you're still stick and confused about something feel free to post below and I'll help out when and where I can. And as always, general feedback on this guide is more than welcome and appreciated in advance. Otherwise, I hope this guide helped and good luck.

Indie programmer currently working on my first game release (after years of hobby projects), an atmospheric story-driven VR FPS/adventure built with Unreal Engine to be announced once I'm ready here and here (for anyone into VR FPS's). Also likes writing about tech, which helps to fund development of the game.

My favs of all time are OOT, Perfect Dark, MGS1, MGS2, GE007, DKC2, THPS3, HL1, WC3, Vice City, and KOTOR, with the most recent addition to my list of immortals being the VR masterpiece Alyx.

If you want help with a new build or upgrade feel free to ask on the main PC builds guide. I try to respond to every comment. If you found the site real helpful and want to help support the work I do here, sharing an article with anyone you think might also benefit from it does help the site and is appreciated in advance. - Julz