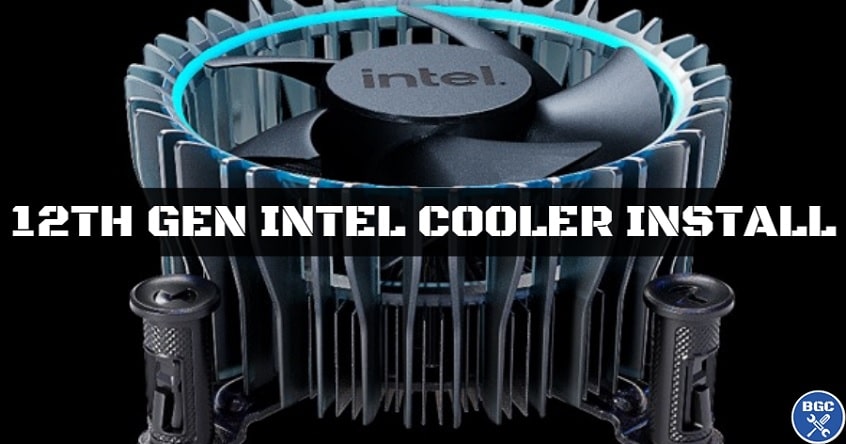 In this beginner friendly guide we'll cover how to install a 12th-gen Intel stock cooler step by step. The new 12th-gen Intel 'Alder Lake' processors provide a nice leap in performance over previous generations, and there are also fresh new Intel coolers for any models that come with an included cooler (basically any Intel CPU that is NOT a 'K' model - models with a 'K' in their model number are intended for overclocking and require you to buy your own cooler). Any non-K CPU from the latest 12th-generation i3, i5, or i7 range comes with the Intel Laminar RM1 cooler, which is what I've used for this installation guide since it'll be the most commonly used (the non-K i9 range comes with a beefier Intel Laminar RH1 cooler).

Related: How to Install AMD AM4 Stock Cooler

Before installing the cooler, make sure your 12th-gen Intel processor is installed on your motherboard and that the motherboard's metal lever/arm is down and locked into place underneath the metal clip found on the side of the CPU socket: 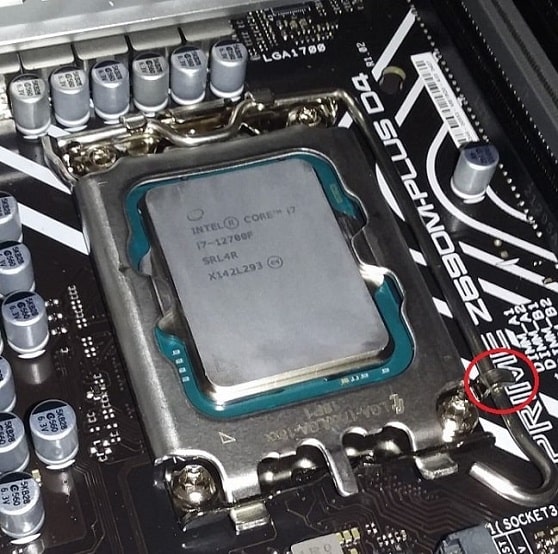 The Intel stock cooler can be oriented in any way, as it is a square design with all 4 corners being the same length apart. Before installing it, it's not required but good practice (at least in my opinion and experience) to first locate the CPU fan header (connection) on your motherboard which will be labelled something along the lines of 'CPU_FAN' (printed on the actual board itself). If in doubt check your motherboard manual to find where it is. You want to locate this ahead of installing the Intel cooler so that you can orient the cooler the most optimal way around.

Grab your cooler - hold it by the sides and don't touch the bottom where the pre-applied paste is or you can smudge it everywhere. Simply hover the cooler over the CPU socket without touching the top of the CPU (which would smudge the paste) to get a sense of the most optimal orientation/positioning to ensure that the fan cable (the cable attached to the cooler) will actually reach the CPU fan header on the motherboard, AND optionally to also ensure that you can neatly tuck away the fan cable to the side somewhere so that it doesn't end up hovering over the cooler's fan (which wouldn't be the worst thing but would look a little messy and could also fall and get stuck in the fan in future). 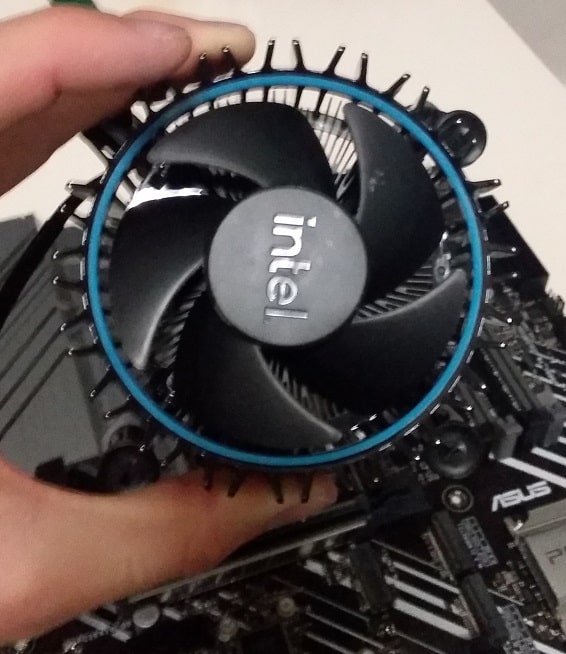 If you position/orient the cooler in a way where the fan cable is right near the fan header on the motherboard, there is more cabling you need to manage (ie to tuck away neatly somewhere). Whereas if you orient the cooler so that the fan cable is a little away from the fan header (yet not so far away that you would need to pass the cable over the fan itself to reach the header), once you've connected the fan cable there will be less "excess" cable to have to manage and tuck away.

3. Mount and Secure the Cooler Onto Motherboard

When you know which way you're going to orient the Intel stock cooler onto your motherboard (to best accomodate the fan cable), it's time to install the cooler.

Slightly wiggle the cooler around to check that all 4 pegs have aligned correctly and are slightly poking through the 4 holes on the motherboard. If the cooler doesn't slide out of place (out of the holes) when you gently wiggle it then it should be in place and ready to be secured. 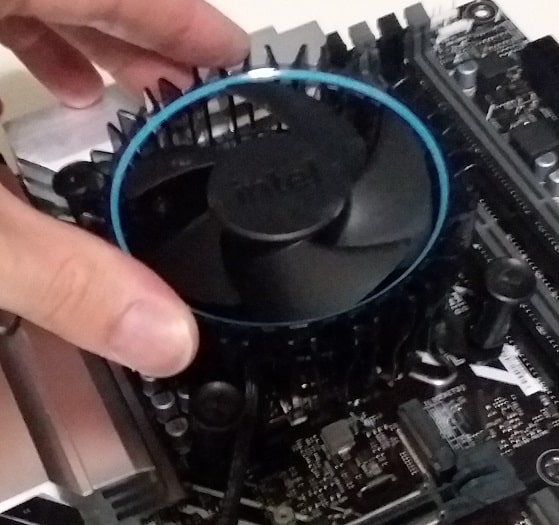 First, simply place the cooler on top of the CPU by aligning the 4 holes on each corner

To go ahead and secure the cooler, you need to push all of the 4 pegs of the cooler down (one at a time) until you hear a clicking noise which indicates that the peg has been properly secured to the motherboard.

It's important that you secure each peg in a diagonal order so that the cooler doesn't become lopsided during this process (which would make securing the other pegs harder or even impossible). In other words, while using one hand to put a little downwards pressure on the middle of the cooler (so that it remains in place and doesn't slide off), start with any peg and push it into place until you hear the click, and then make sure to next secure the peg opposite that peg next (as in, not the peg next to it, but the one opposite it in a diagonal direction). 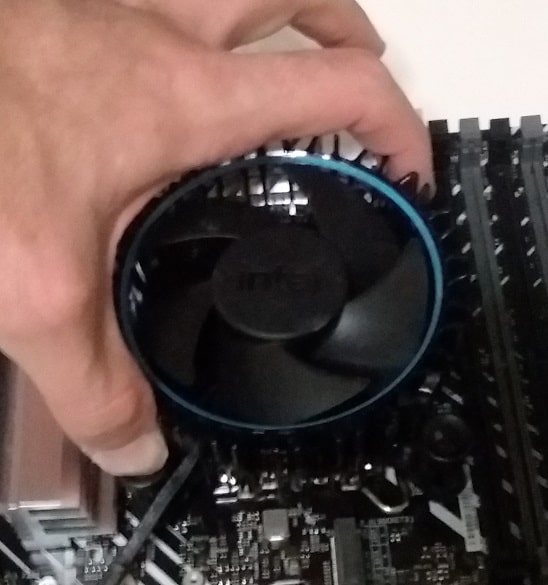 I pushed the bottom left peg in first, then the top right peg. 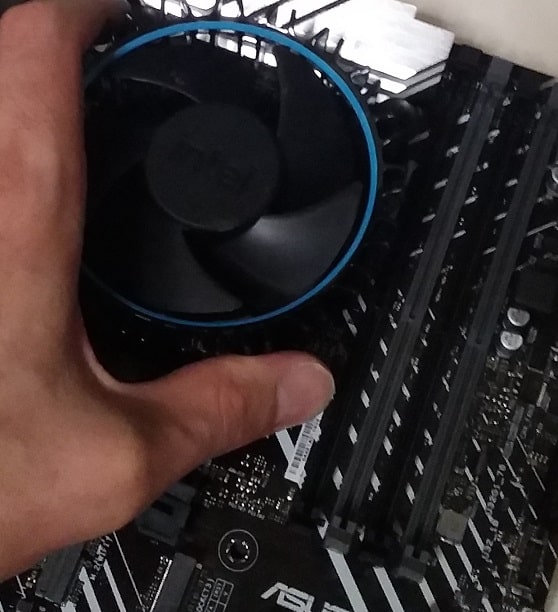 Pushing the last 2 pegs to fully secure the cooler

It may take a little wiggling around of the cooler to get all 4 pegs done (to keep the cooler correctly aligned with the 4 holes on the board). Once all 4 pegs have clicked in, check to see the cooler is firmly secured to the motherboard by trying to slide the cooler from side to side. If it doesn't move, you're good to go.

Now simply connect the fan cable into the fan header on the motherboard labelled as "CPU_FAN" or something along those lines as mentioned earlier. You could technically use a chassis fan header instead (which are used to connect case fans), but it's good practice to use the dedicated CPU fan header.

Also try and neatly tuck away the cable somewhere on the side of the cooler if you can - perhaps between the cooler and a heatsink nearby. You don't have to overthink this - just put the cable in a position that is out of the way of the cooler's fan and/or that looks good to you. And with that, your 12th gen Intel cooler is installed.

When you boot your computer build, the cooler fan should start spinning, and to further confirm your cooler is properly installed and making proper contact with the CPU (and that the paste is doing its job to transfer heat), you can check your CPU temperature in the BIOS to ensure its within a normal range. 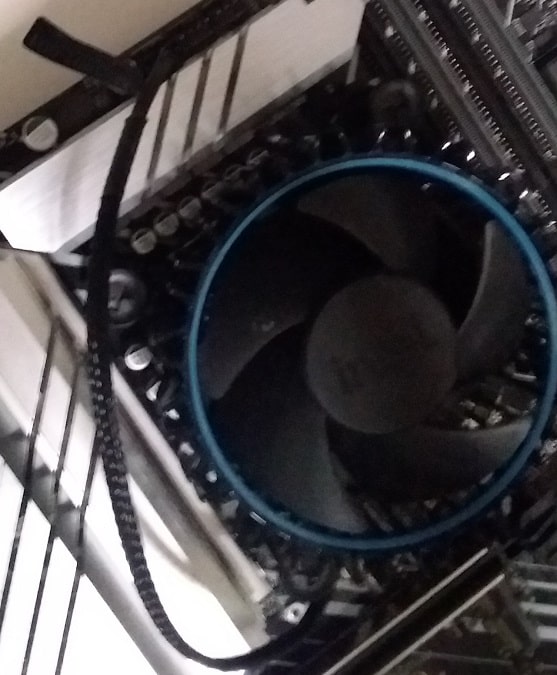 Connect the fan cable, then try to tuck away the cable on the side somewhere if you can