This guide is dedicated to finding and fixing any problems you have with booting up your new custom PC build. Hopefully you won't have to refer to this troubleshooting guide, because if you've followed all the instructions in our gaming PC build walkthrough tutorial you should have booted up properly the first time without any issues. So if that's the case, you can ignore this article exists, and go on your merry way. 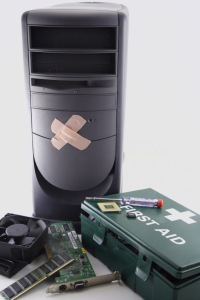 But if you did encounter a problem on first boot, such as your new PC build not turning on at all, your system powering up but not starting up, your motherboard making strange beeping noises, or other problems, fear not as this simplified guide (written in as simple language as possible) will take you step by step through common  issues and how to solve them.

But firstly, if your new gaming PC build doesn't boot, stay calm and don't freak out as it's usually something really simple that you may have done incorrectly or simply forgot to do. After this PC build troubleshooting guide your new battlestation should be up and running.

In the rare case that a component is damaged or dead (which can happen and we'll explain how to find this out below), you can simply return them for an exchange, as all your parts will be under warranty if you bought them new. Even refurbished PC parts should have a warranty.

First-Boot Problem #1: Not Powering Up

If when you press the power button on the front of your case nothing happens at all, as in no fans turn on, no lights turn on, and you don't hear a thing, start with the steps below.

First things first; did you accidentally forget to plug in the power cable from the back of your power supply to a wall socket AND turn on the switch at the wall? Also check that the wall socket is actually working by plugging in another device to that socket to check it's giving out power.

This is something first-timers actually forget more than you'd think; have you turned ton he switch on the back of your case (specifically, the back of your power supply)? The switch should be marked with a “0” and “1”, so make sure the “1” side is pressed down which means it's on.

You'll want to now go back inside of your, remembering to ground yourself first, and triple check the power connections from your power supply to your motherboard are fitted to the right sockets and are plugged all the way in. There is the 20+4 main motherboard connector and the 4+4 processor connector to check.

Triple check you've plugged in the front panel connections in the proper sockets, and that they're plugged in all the way. You could have mixed up the power-on and reset button connections.

Consult your motherboard manual to be 100% sure you've got them in the right place (and re-read our section on this process in our PC building installation guide).

Also, it's a good idea to check that these connections are also firmly connected to the switches on the front of your case. Remove your case's front panel to get a better look.

Also check the motherboard screws are tight enough while you're at it (they don't need to be too tight though, in fact we advise against that).

If none of the above works, try and use another power supply in your PC if you have access to one from either an older PC or from a friend's PC. Getting a dead power supply is rare, but it could happen.

To test your power supply you could buy a power supply tester which doesn't cost much, but make sure it's a reliable one as there is the odd chance you'll get a false positive reading.

You could take your PSU into a local PC or electronics store as they may be able to test it for you on the spot (either for a small fee or for free if you smile and ask nicely!).

There are also DIY methods to test your PSU but this isn't recommended unless you know what you're doing as it involves a little bit of mucking around with the wiring and could be a little dangerous when not done properly.

If you're a novice you should leave this to a professional. If you do test your PSU and it comes back as working fine, your motherboard could be dead.

First-Boot Problem #2: Power But No Startup

If when you turn your custom gaming PC on you have power and you see the light on your PC/motherboard, but your PC doesn't boot-up and shows nothing on your screen, this is your section.

On top of what was said there, check that your CPU cooler is connected properly too, as if your system doesn't detect the cooler it may shut itself down as it's dangerous to run a CPU without a cooler installed properly.

Also check your SATA power connections from the power supply to your drives, including the data transfer SATA cables.

This shouldn't be an issue as you should have picked a PSU that can handle your build all the way back in the planning stage, but worse mistakes have been made; check that your power supply has enough watts to more than cover all of the components connected in your system.

If your PSU doesn't have enough power it may automatically shut down after you try to turn it on as not enough power is going through to your motherboard.

Step 4: Checking Your Other Components

If you're still not getting anywhere, go ahead and check all of your remaining components including RAM, graphics card, and CPU, to make sure they're properly installed. Go over the corresponding sections in our guide on installation, and re-do those connections.

Still nothing? Try removing one component at a time until your system does boot-up. This could narrow down your problem to a faulty component.

If you've carefully gone through everything above to no avail, including the steps from Problem #1, continue on to the Beep Codes section below which could help you narrow the issue.

If when you turn your system on it powers on and then power off and continues in this cycle without you doing anything, this could be a sign your motherboard is faulty.

Or, it could be your power supply, so refer to the section on testing your PSU in Problem #1 above.

This could be a problem if you're using an older PSU with newer components where the current-generation parts require higher start-up currents than the older PSU can handle.

Also, continue on to the Beep Codes section below which may help.

One way to narrow down an issue with your first-boot is by diagnosing your motherboard. There are two ways you can do this. Firstly, check if your motherboard has a small LCD diagnostic screen on its rear panel. This isn't likely on a budget board, but some of the more feature-rich boards will have this handy feature.

The LCD screen will display error codes when you try to boot-up, which you can look up in the motherboard manual or on the manufacturer's website. Your board may also have diagnostic LED lights which show a pattern that you can also check against the manual or website.

The second way to diagnose what's wrong with your system and/or motherboard is by using a post speaker, which you'll need to get separately as they don't ship with motherboards these days (they used). What you do is attach this little speaker to the front header panel contacts on your board, and it emits a beeping sound when you try to boot-up.

You should only go out of your way to get a post speaker if you've done all the other checks in this guide to troubleshooting a PC build and you have a suspicion that your motherboard is at fault. Alternatively, you could bring your motherboard to a local store for help with this, or ask a PC expert or friend who will have one available.

Anything other than the one single beep after you turn on your system means there is something wrong. Different types and lengths of beeps mean different things to different boards, so you'll need to check the beep/s you get against your specific motherboard's manual or website. Alternatively, give your manufacturer a call to get to the bottom of the beeping. The following guides to making sense of specific beep codes for certain types of motherboards might also come in handy:

How to Get Further Help

Going through all of the above steps to troubleshooting your new PC build, including going over the main PC installation steps again to make sure you’ve done it right, should weed out most first-boot problems. But if you're still having issues with booting up your first computer properly, here are some things you can do:

Good luck, and like mentioned there's logically not much reason to stress out as usually the issue will be solved after doing a few checks and re-installing things, or perhaps you got a faulty part in which case you can simply return it for another one.

Indie programmer currently working on my first official game release (after years of hobby projects), an atmospheric story-driven VR FPS/adventure built with Unreal Engine to be announced once I'm ready here and here (for anyone into VR FPS's). Also likes writing about tech, which helps to fund development of the game. My favs of all time are OOT, Perfect Dark, MGS1, MGS2, GE007, DKC2, THPS3, HL1, WC3, Vice City, and KOTOR, with the most recent addition to my list of immortals being the VR masterpiece Alyx.

If you want help with a new build or upgrade feel free to ask on the main PC builds guide. I try to respond to every comment. If you found the site extra helpful and want to support the content here, all I ask is consider sharing an article with anyone you think might also benefit from it (I'm also never going to say no to coffee should you want to directly support the site). - Julz